Fusion food takes many forms. One common instance involves a chef who pulls a little from Cuisine Column A and a little from Cuisine Column B, then smashes them together. The chef hopes this new creation will be the next Cronut, but usually what you end up with is the next Egg Stew Young (don't you dare steal it, that one is totally mine). Another type of fusion occurs more organically as cuisines, techniques, and ingredients mix over time. That mixing may be the result of two cultures existing in close proximity to one another, or due to the spread of foods along vast trade routes, or, frequently, by violence and conquest. Often, it's all of these forces at once. Tested by time and generations of cooks, this form of fusion is almost always far more successful than the impromptu creations of an individual who's just trying to do something "different."

One great example of this kind of historic fusion is the Italian dish known as pasta con le sarde—pasta with sardines—which seamlessly blends Italian and Arabic cuisines. While there are some differing theories on its origins, it's very likely a byproduct of Islamic rule in Southern Italy, dating back to the tenth century. Pasta con le sarde is a Sicilian dish, from the city of Palermo more specifically, and it's unlike just about any other pasta in the Italian canon. On paper, it can sound unappealing, something I hadn't even realized until I started to write this; I learned of it by eating it, and so I've never considered how it might sound to someone who's never breathed deep over a plate of it, then taken a bite. It's incredibly delicious, to me.

There are many variations of pasta con le sarde, but they all consist of an unlikely combination of sweet and savory flavors: sweet sautéed onions, aromatic fennel and saffron, plump raisins, toasted pine nuts, salty anchovies, and oily chunks of fresh sardines. Plus pasta, of course (often bucatini, but spaghetti is a great choice, too). The pasta, sardines, fennel, and anchovies are all typical Italian ingredients, and the inclusion of raisins and saffron and pine nuts is a textbook example of Arabic culinary influence.

As its name indicates, pasta con le sarde is pasta with...sardines. A key detail, though, is that sardines are not the only fish typically found in pasta con le sarde. Anchovies play an important role, too, upping the overall savoriness of the sauce and reinforcing its full-fledged fishiness. Sardines, after all, are not a mild fish. They have dark, oily flesh that's rich and undeniable fishy. Anchovies are similar in that respect, just saltier and funkier.

The key in both cases is to make sure they're high quality, because there's good fishy and funky, and then there's bad fishy and funky. For the sardines, good means fresh fish that smell like they only recently were scooped from the ocean; it does not mean fish that smell like they've been sitting in the sun for the past six hours. (Read all about how to clean and fillet fresh whole sardines, with step-by-step photos.)

Some shortcut pasta con le sarde recipes call for canned sardines, which are no doubt easier to find, and, I suppose, could work in a pinch. But you lose a lot by going that route, and I say that as someone who adores canned sardines. The problem with them in this dish is that they've already been cooked hard in the can, rendering the flesh dry and dense. Toss it in a skillet and cook it into a sauce, and you only compound the problem. That, or they'll eventually just fall apart, depriving you of the slick chunks of tender sardine the best versions of this dish offer.

For the anchovies, you want high quality oil-packed fillets. If you feel up to it, you can follow my instructions for oil-packing your own salted anchovies, a worthwhile project if you eat a lot of them (they're so good done this way, so much better than most anchovy products, that you will eat a lot of them). Just for reference, if you've ever eaten a whole anchovy fillet, say on a pie from an average pizzeria, and found it alarmingly salty and weirdly furry, that was a bad anchovy. Good ones are salty too, but not cringingly so, and they have a smooth and firm texture that won't remind you of a hairy caterpillar. Whether you prepare your own or buy them already in oil, they are worth seeking out.

In Italy, pasta con le sarde is made with wild fennel, which grows along the roadsides. It doesn't have a large bulb, like our cultivated fennel does; instead it boasts thick tufts of fronds that have an especially intense fennel aroma, underscored by a menthol-like kick. It's also not nearly as delicate, and requires longer cooking to tenderize it.

In many recipes, what you'll see is a blanching step in which the fennel fronds are boiled for a few minutes until softened. The cooking water, which has now become infused with fennel flavor, is later used to boil the pasta, imbuing each noodle with a blast of herbal anise. Then the cooked fronds are chopped up and added to the sauce.

If you live where wild fennel grows, this is the best way to do it. If you don't, cultivated fennel will have to do. Luckily, there are ways to make it work. To start, you're going to want to use the bulb of the cultivated fennel along with the fronds. I dice the bulb, adding it to the pan with the onion and sautéing them both together until soft and tender. This creates a good base-layer of fennel flavor that will spread throughout the dish. The delicate fronds are best used as a fresh herb, especially since most cultivated fennel bulbs don't come with all the fronds still attached, leaving you with only a few to play with.

Some people—usually chefs—will also sneak fennel pollen into the dish, which has a more intense wild-fennel flavor that can make up some of the difference. Fennel pollen can be expensive, though, and, unlike at a restaurant, it's not something that's easy to use up quickly at home. Instead, I punch up the fennel flavor with ground toasted fennel seeds, which I mix into the bread crumbs that garnish the pasta.

Saving the Crumbs for Last

You've probably heard the rule that says to never combine fish and cheese. It's not a very solid rule, but this is one pasta where you're going to want to leave the Parm out. In its place are bread crumbs, which help soak up the oily sauce and add the perfect contrasting texture to the slick noodles. By seasoning the bread crumbs well with fennel seed, salt, and pepper, they play a role not totally different from a showering of grated cheese, but they do it without introducing the aged flavor of cheese. It's a trick that can be used to good effect in many dishes—not just fish-based ones—in which we tend to reflexively layer on grated cheese.

I don't like cooked dishes with raisins where the raisins are fully dry and shriveled. I like them plumped up. So I start by soaking the raisins in hot white wine with the saffron. This gives the raisins a chance to soften, and pulls the saffron flavor out into the wine, so that it's well extracted before going into the sauce near the end.

Then I prepare the breadcrumbs, which only go into the dish right at the end, but need to be ready when the time comes. I'm partial to panko, even in an Italian dish like this, because it has a lightness and excellent crunch without being gritty. If the panko is too large, you can crush it into smaller bits in your hands.

I toast it with olive oil and ground fennel seeds, then season it well with salt and pepper.

To cook the sauce, the first step is to cook the onion and fennel in olive oil until sweet and soft. Just as the vegetables are approaching that stage, add the anchovy fillets and cook them until they dissolve into the oil.

At this point, there should be some browned stuff sticking to the bottom of the pan. To stop the browning and scrape up all that flavor, I add the wine, along with the raisins and saffron, then reduce it until the wine is just about fully evaporated.

Finally, in go toasted pine nuts and sardines. Let them cook just until the sardines are reaching doneness.

While all this is happening, you will also have had a pot of water boiling on the side to cook the pasta. As soon as it's al dente, transfer it to the skillet with the sauce along with a quarter cup or so of the starchy pasta cooking water. After some quick stirring and tossing, the pasta water will emulsify with the sauce, coating each noodle. If the sauce is too dry at any point, just hit it with another quarter cup or so of pasta water.

I always hit the pasta with a final generous glug of olive oil, just to sex the whole thing up, then toss in a small handful of the breadcrumbs, incorporating them so that there's a very, very light coating on the noodles.

Onto plates the pasta goes, topped with a much more generous handful of the breadcrumbs (and sometimes an extra drizzle of olive oil—there's never really a limit), and reserved fennel fronds.

The flavors are global, but you'll only notice if you pause to think about it for a moment. It's usually too tasty to bother with that. 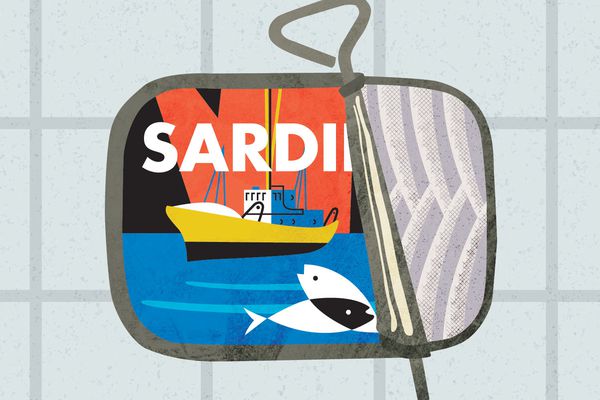 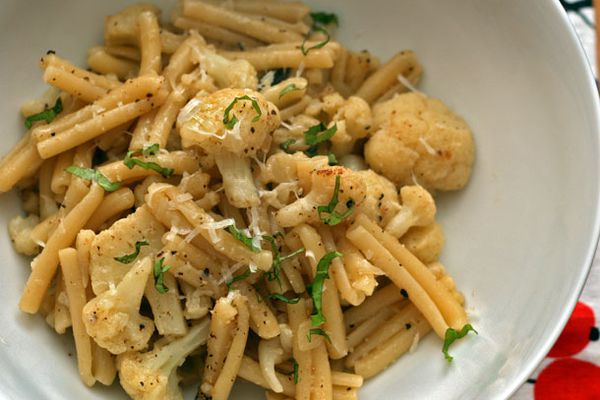