Acidity, crisp-tender texture, and a tingle of numbing heat.

In Chinese, there’s an idea of “kai wei,” to open up the stomach and prepare the palate for the meal. Like an amuse bouche, these dishes aim to perk interest and awaken the senses, which this Sichuan stir-fried potato does with freshness, acidity, a crisp-tender texture, and a tingle of numbing heat.

As part of a generous table filled with Sichuan dishes—bright red dry pot, mouth-numbing mapo tofu, and robust braised meats, for example—these potatoes are a perfect complement to the explosive flavors that may otherwise overwhelm. Featuring al dente, waxy potato shreds paired with scallions, garlic, and a combination of dried and fresh chile peppers, the result is a layered side dish that the entire table constantly returns to between bites of the more aggressively flavored offerings.

While potatoes are more commonly categorized as a starch in the West, Chinese cooking more often recognizes potatoes as a vegetable, like eggplants or leafy greens, to be imbued with potent flavors and eaten with plain rice. And if there’s any doubt that potatoes can and should be eaten with rice, this recipe is a great introduction to some of the wok-cooking techniques that make such a good case for it.

Because this style of wok cooking is done in such a short amount of time and at such high heat, being well prepared prior to the stir-fry is imperative:

This is, it's worth noting, just one of many renditions of this dish. It can be served hot as a side or cold as an appetizer. There’s also a version called qiangchao tudousi ("blanch-fried shredded potatoes") that's seasoned more simply, with most of the peppers and vinegar taken out of the equation. And there are even iterations beyond the borders of China, from the Tibetan alu sipsip to the Korean gamja bokkeum.

At home, it’s best to cook this dish at this batch size and not to increase the quantities, so as to prevent overcrowding of the wok.

If you want a less spicy version of the dish, you can substitute an equal quantity of red and green bell (or Anaheim) peppers.

To make a less aggressively seasoned version of this dish, a cleanly seasoned dish called 炝炒土豆丝, or blanch-fried potatoes, halve the amount of peppers and omit the black vinegar.

If you can’t find Totole Granulated Chicken Soup Mix, you can substitute any other chicken broth powder, such as Orrington Farms Chicken Broth powder.

If you want to dress up the finished dish, whether served hot or cold, you can toss it with a chile oil of your choosing.

To serve this dish cold, the stir-fry can be made up to 2 days in advance and refrigerated in an airtight container. 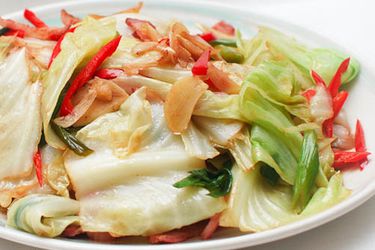 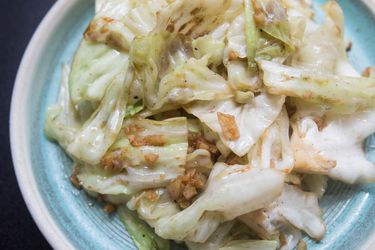