A monumental classic upgraded with mushrooms, bacon, and Gruyère.

Daniel Gritzer
Senior Culinary Director
Daniel joined the Serious Eats culinary team in 2014 and writes recipes, equipment reviews, articles on cooking techniques. Prior to that he was a food editor at Food & Wine magazine, and the staff writer for Time Out New York's restaurant and bars section.
Learn about Serious Eats' Editorial Process
(13)
0
In This Recipe

I'm halfway tempted to start this story by making some sort of joke about grits, my last name, and why the similarity is somehow a reason to believe me when I say that I've come up with the ultimate shrimp and grits recipe. But I'll spare you (this time). Instead, I'll present my case on its own merits, and with the understanding that "the ultimate" shrimp and grits is a pretty meaningless concept—there are simply too many versions of this dish to even try to compare them in any objective way.

In fact, there are only two things you can know for sure about shrimp and grits. First, it has shrimp. Second, it has grits. Beyond that, it really depends on the cook. You'll usually find some kind of smoky pork in there, like bacon, tasso ham, or andouille sausage. Mushrooms are common, the grits sometimes have cheese and sometimes don't, and the quantity of gravy-like sauce varies from none to tons. There's not a lot of consensus on the "right" way to make it, and I love it for that—the possibilities make things more interesting.

I took the inspiration for my recipe from what is perhaps the most famous restaurant version: the late chef Bill Neal's recipe, from Crook's Corner in Chapel Hill, North Carolina. His includes shrimp, mushrooms, bacon, and scallions in a light gravy, on top of grits that are loaded with cheddar and Parmesan, the whole thing spiked with lemon juice and hot sauce. It's a great dish, but the recipe, as adapted for the home cook here, is clunky. It calls for a heavy dose of lemon juice, which overwhelms the other flavors, and the instructions call for sautéing everything together in the skillet—first the mushrooms, which are then joined by the shrimp—an approach that makes it very difficult to brown the shrimp as directed.

I wanted to work with the same basic set of ingredients—shrimp, bacon, mushrooms, cheese grits—but I wanted to put my own spin on how they should all be brought together.

Grits are nothing more than a porridge made from dried ground corn. According to Anson Mills, grits are most often made from dent corn, which is softer than the flint corn that's more common with polenta. The biggest differences, though, tend to relate to grind size, with grits milled more coarsely and with a more irregular grind than polenta.

The cooking process is essentially the same as for polenta: Simmer the grits in liquid, stirring frequently, until they cook up into a soft porridge. The specific liquids you use, and the ratio of that liquid to the grits, are two critical factors that determine the final flavor and quality of the grits. I love using stone-ground grits whenever possible, because I enjoy the texture of the final grits when the grind isn't perfectly consistent.

In the Crook's Corner grits recipe, the liquids used are chicken stock and half-and-half; grated cheddar and Parmesan cheeses are then stirred in at the end. There's nothing wrong with any of that, but I wanted to add a little more synergy between my grits and the shrimp topping.

The first thing I did was omit the half-and-half, since there's more than enough cheese in these grits to deliver a rich dairy flavor without doubling down on it. That meant using chicken stock alone. But as good as chicken stock is here, it can be made even better by enriching it with the flavors of the topping.

To do that, I infused the stock with both shrimp shells and mushroom trimmings, simmering both for about 20 minutes to extract their flavor. The result was a more complex and deeply flavored stock that echoed two of the primary ingredients in the dish.

Then I thought about the cheese. Cheddar and Parm are great, but they're not the first ones I would grab to pair with shrimp and mushrooms. Instead, my mind turned to Gruyère, which melts beautifully and has earthy notes that play off the mushrooms so much more elegantly.

The other critical step here is to make sure you get the ratio of liquid to grits right. Just like with polenta, this is one of those things people get wrong all the time. The ratio definitely shouldn't be two parts liquid to one part grits, which I see called for on rare occasions and which could only be suggested by people who inexplicably love undercooked, crunchy grits. And it's not the four parts liquid to one part grits that almost everyone claims to be right. No, the minimum is five parts liquid to one part grits. If you're using stone-ground grits with some larger chunks in the grind, you may even need to bump it up a little more to make sure those chunks fully hydrate and soften (though I'd start with the 5:1 ratio and then whisk in more liquid, a half cup at a time, only if needed).*

When you use such a high ratio of liquid to grits, it will start off very, very watery. You'll say to yourself, This guy is crazy. He doesn't know what he's talking about. He must think grits soup is good! If you're impatient, grits soup is exactly what you'll end up with, along with the conviction that I'm a terrible source for cooking advice. So please—wait. Simmer those grits, stirring often and scraping the bottom to prevent them from burning, then simmer, and simmer, and simmer some more. It'll take close to an hour, but eventually they'll thicken up and you'll have the best grits of your life, hands down.

Plump Up Those Shrimp

Next up, let's improve the shrimp. Of all the techniques we use to get the best shrimp, tossing them with a dry brine of salt and baking soda before cooking is one of our favorites. The salt helps keep the shrimp plump and moist, while the baking soda gives them an appealing snappy bite—no mushy shrimp here. Baking soda can often give foods a funny chemical (for lack of a better word) flavor that I'm sensitive to, but with the shrimp, I've never noticed it. You don't even need to rinse them. For this recipe, I also toss the shrimp with a small amount of cornstarch, which helps to slightly thicken the sauce later on.

Preparing this topping presents a few small cooking challenges. Shrimp, for instance, cook very quickly, and because they're so moist, they resist browning. Put them in a pan that's already full of other ingredients like mushrooms, and you'll cook them, but you're unlikely to brown them. Mushrooms, meanwhile, need lots of time for all their water to exude and steam off before they'll ever start to brown. Put them in a pan with shrimp, and the shrimp will be severely overcooked by the time the mushrooms are ready.

The solution is simple: Cook each ingredient in sequence, then combine them at the end to finish. Here's the process:

Start by sautéing diced bacon until it renders all of its fat and crisps up, then remove the bacon with a slotted spoon, and transfer it to towels to drain. You should have about a quarter cup of rendered fat in the pan. Pour off and reserve all but one tablespoon.

Next, sauté the shrimp in that tablespoon of bacon fat over the highest heat you can manage. That'll help you get some color on the shrimp right as they're nearing doneness. I try to remove the shrimp from the pan just a hair before they're fully done, when there's still a hint of translucence right at their centers. Not only will they continue to cook via stored residual heat, but we'll be adding them back to the pan at the very end of the process to fully heat them through before serving.

With the shrimp out of the pan, it's time to cook the mushrooms. I like to use a mix of mushrooms if at all possible for a wider range of flavors and textures. Cremini, oyster, and shiitake mushrooms are all great options.

Add the reserved rendered bacon fat back into the pan, which at this point should be coated in a layer of browned bits. Don't worry—once we add the mushrooms, they'll release liquid, and you can use the liquid to scrape up that fond and prevent it from burning. Mushrooms can act as sponges, soaking up the oil in the pan; if the pan does get too dry, you may need to add a splash of oil to keep things well lubricated.

Eventually the mushrooms' liquid will fully evaporate, and the browning will start; don't cut the browning step short, because it's how they get their great flavor. Right toward the end, stir in minced shallots, garlic, and cayenne pepper, and cook them just long enough to soften the aromatics. The cayenne is my answer to the hot sauce you see in a lot of recipes—I find that cayenne works better here, adding a mild heat without all of that vinegary punch. It blends in and supports the other flavors instead of covering them up. If anyone wants hot sauce, it can be added at the table.

If all is going well, your mushrooms should be well seared, the shallots and garlic softened, and the pan once again coated in a layer of browned bits on the verge of burning. Now's the time to pour in some chicken stock to deglaze that pan and stop it from going up in smoke.

I use the stock to loosen the fond on the bottom of the pan, scraping it up once more, and then slide the shrimp back in. A quick toss combines everything, and whisking in a couple of tablespoons of butter enriches it all. I finish the dish off the heat with a generous dose of fresh minced herbs—in this case, a mixture of chives, parsley, and tarragon, which, with the addition of chervil, would be called fines herbes. It's a classic French blend that adds a subtle touch: a little bit oniony, a little bit anise-y, and very much fresh. It's so great, I see no reason to limit it to French food alone (in fact, I also add it to my shrimp scampi).

The final step is to spoon the grits into bowls and scoop the shrimp, mushrooms, and their gravy on top. Sprinkle on those crispy bacon bits, then take a bite. I'm willing to bet it will be some of the best shrimp and grits you've ever had. In fact, I'm willing to put my name on it. Literally.

Shrimp and Grits With Bacon and Mushrooms

This article originally stated that the primary difference between grits and polenta was that grits are made from nixtamalized corn (that is, corn treated with an alkaline solution). It's a common misconception widely reported by many sources, but generally not correct.

This recipe uses a high ratio of liquid to grits. It will seem very watery at first, but don't despair. Just hang in there and cook those grits, stirring frequently and scraping the bottom, until they've fully thickened. It will happen, and they will be far superior to grits made with less liquid. I highly recommend stone-ground grits if you can find them—do not substitute instant or quick-cooking grits. 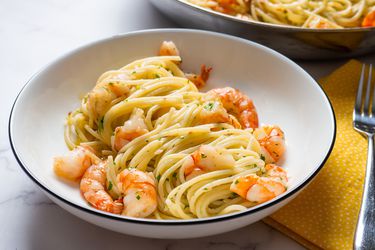 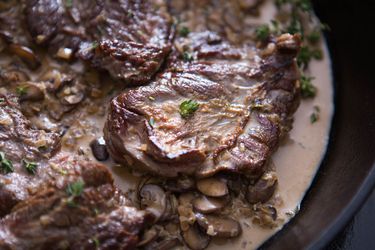