You know that crushing feeling you get when you're two seconds away from making beef stew and then realize you forgot to marinate the meat? Yeah, me neither, but open enough cookbooks and you might come to think marinating the beef before stewing is an important step, especially if you want the stew to be really, really good. I decided to probe this question to determine just how critical marinating the beef really is.

Let's start by reviewing what marinades do to meat.

Marinades often contain additional ingredients, including oils, sugars, and fruit juices like pineapple juice (it has enzymes that are tenderizers), but those are less relevant when it comes to stews.

The thing with marinades, though, is that they don't penetrate very far into meat. Just to give you a visual example, I marinated pieces of beef chuck in Guinness (for a Guinness stew) and red wine (for boeuf Bourguignon) for a full eight hours (the rough equivalent of "overnight"), then sliced through them. What do you see? An imperceptibly thin surface layer that has clearly absorbed marinade, and then normal-looking beef below that.

Now, simply not being able to see the impact of a marinade on the interior of the beef doesn't mean that nothing penetrates below the surface. Salt and acid, for instance, if left long enough, can get deeper into the muscle, but most aromatic molecules don't make it so far—mere millimeters at most.

If marinades primarily alter just the surface of the meat, there can still be a benefit to using them. We know from experience that, when cooked quickly over high heat, meat can taste a lot more flavorful after it's spent a short time in a marinade—that's why marinades can be a great idea for grilled meats. Even in my recipe for coq au vin, which is a quick braise, I found that the chicken benefited from a bath in red wine first—though, amazingly, the shortest marinating time I tested, 25 minutes, was nearly as effective as overnight. That just goes to show that, because a marinade's greatest impact is on the surface of the meat, a short marination is usually enough to give the effect you want.

The Test: Marinated Versus Unmarinated Beef in Stews

That leaves us with the question of marinades for long-cooked beef stews. To find out if marination really helps them, I cooked several stews side by side. All of the stews started with the same ingredients, and all of them were cooked with the same process for the same period of time. The only difference was whether or not the beef had been marinated before cooking. (I tested stews made with wine and with beer.)

When I quickly seared and tasted the meat before the long simmer in wine or beer, I could easily tell them apart. However, in each case, once the stew was fully cooked, I couldn't tell any difference between the meat that had been marinated and the meat that hadn't.

What this shows is that, when the beef is cooked in a liquid that is as flavorful as the marinade—which, in the case of stews, it almost always is—the marination step isn't necessary. Whatever flavor and tenderization the beef would have gained in the marinade, it will still gain in the stew pot.

After stewing each cut in a mixture of red wine and chicken stock, I was unable to detect any difference in levels of moisture among the samples. The salted samples all tasted more evenly seasoned throughout compared to the unsalted one, but that was the only benefit. If you want to pre-salt your beef for at least 40 minutes (the time it takes for the beef to reabsorb any liquids initially drawn out by the salt), go ahead. But it won't make the stew meat moister. Stewing, clearly, goes on too long and takes the meat to too high of a temperature for salt's moisture-retaining benefits to continue to be evident.

In the end, the most important thing you can do to keep your stewed beef moist: Choose an appropriate cut, like the collagen-rich chuck below, and don't overcook it. 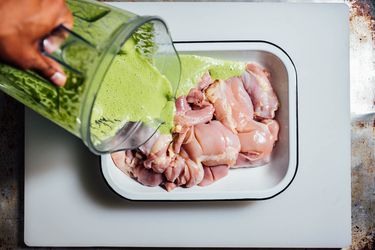