This week we'll be discussing rendang, dishes that are as integral to Malaysian cookery as laksa or satay. A rendang is a dish of meat (though seafood or vegetables are used as well) stewed slowly in a coconut-curry liquid. Pastes containing aromatics and spices like lemongrass, galangal, chilies, and cinnamon are added in the beginning. As the meat stews in the paste and coconut milk mixture, the liquid becomes more and more reduced until finally, only the oils of the coconut milk are left. To finish the dish, the meat is lightly browned in the remaining coconut oil. The meat (or whatever item is being stewed) is intensely flavorful and tender, yet crispy and sticky on the outside with bits of browned aromatics.

A Unique Preparation for Preserving Dishes

To help with my pursuit of rendang, I spoke to Fatty Crab's chef Zak Pelaccio, who crystallized the unique attributes of a rendang preparation. First, the rendang is counterintuitive to the basic Western technique for stewing, in which the item is first browned, then simmered in liquid. Cooking a rendang is, in this sense, the polar opposite: The items, after being stewed for hours in the coconut milk, are then left to brown in the coconut oil once the liquids have boiled away. Such a preparation is due in large part to the original purpose of rendang, Zak explained: to preserve dishes without the aid of refrigeration. Since the dishes are meant to be kept at room temperature for a long time, a rendang's moisture comes from coconut milk—in essence, replacing the natural moisture of the food with that of the coconut.

To illustrate the rendang technique, we'll be showcasing three recipes using three variations of the technique and three different stewing items. The first, a chicken rendang, illustrates the standard preparation in the chicken is stewed in the coconut-curry mixture until only the oils are left. The chicken is then browned in the coconut oils, producing the rendang's signature crusty surface and juicy interior.

In the second rendang dish, potatoes are stewed in place of meat. Here, the coconut milk mixture must be reduced halfway before the potatoes are added, or else the potatoes would finish cooking before the liquid boils away. The resulting product is one of my favorite potato dishes: the potatoes are meaty with the flavor of coconut, and the skins are crisp from the browning in coconut oil.

Finally, our third recipe focuses on beef rendang, perhaps the most famous of all the rendang dishes. Courtesy of Pelaccio, the recipe for beef rendang is an updated version of the classic, which is more akin the chicken rendang. In Pelaccio's version, beef short rib is marinated in the paste, then braised very slowly in coconut milk in the oven for six hours. By the end of the braising time, the coconut milk will have mostly reduced, at which point, kerisik—freshly grated and toasted coconut—is sprinkled into the dish to provide a sweet and toothsome contrast to the tender meat.

The Ritual of the Rendang

"A rendang is a time-consuming affair and all the preparations entail grinding, toasting, and tending at the stove."

Regardless of the method you decide to try, cook the rendang for someone you love, or at the very least, someone you like very much. A rendang is a time-consuming affair and all the preparations entail grinding, toasting, and tending at the stove. Immerse yourself in the ritual of the rendang: from the initial processing of the pastes and spices to the long and steady stewing in coconut milk. Watch as the coconut milk undergoes a dramatic transformation, from its initial soupy stage to a thickened liquid—so thick that a wooden spoon dragging through the pan will leave a trail in its wake, like that of a thickening custard base for ice cream. The liquid will give way to the remaining oil, golden and bubbling around the browning pieces of meat. The heat must be turned to very low at this point; slowly, the items will gently fry in the remaining oil. The leftover bits of browned aromatics, like detrital matter in the aftermath of a flood, are a little chewy, a little crisp, and addictively delicious—like nuggets of candied and spiced coconut matter.

Finally, be sure to use a non-stick skillet for your rendang, or else the sugars in the the coconut milk will quickly stick to the bottom of the vessel, eventually burning well before your dish finishes cooking. Halfway through trying my first rendang, I switched from my Le Creuset skillet to my three-dollar IKEA non-stick saute pan, and was a much happier cook for doing so. 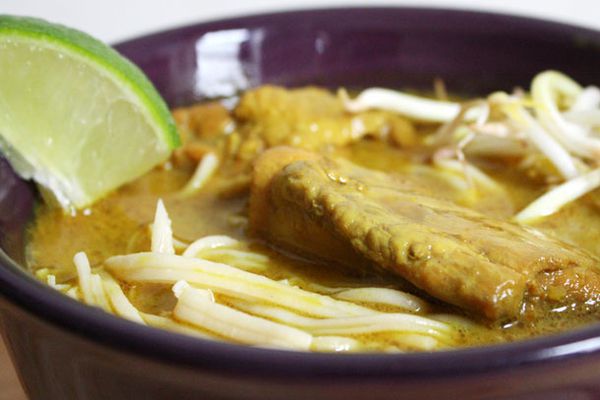 Seriously Malaysian: How to Cook with Sambals 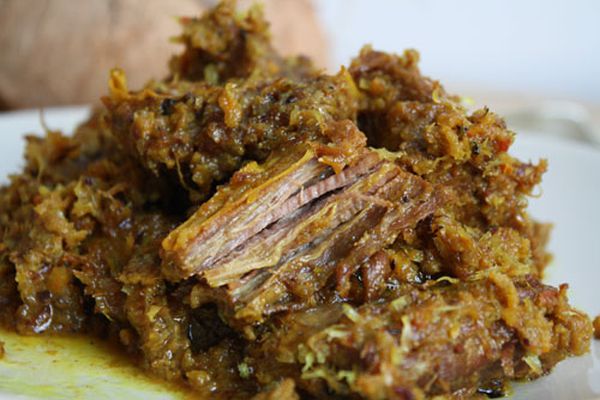 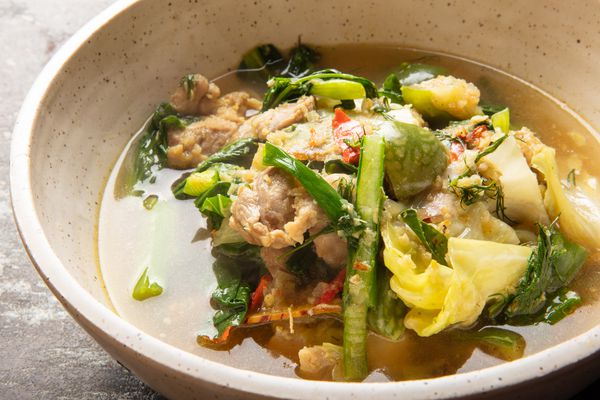 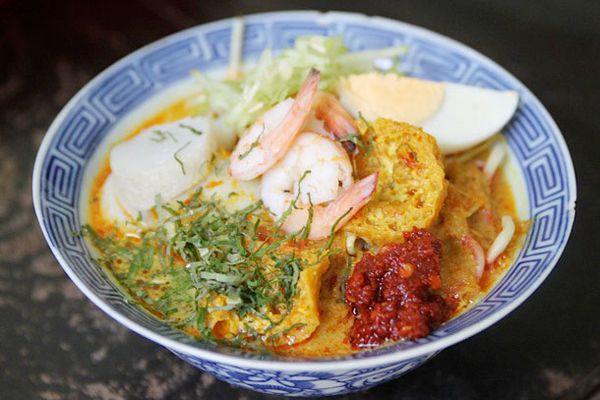