Just because I got my almond on for Valentine's Day doesn’t mean I'm completely anti-chocolate. I've already confessed that I'm pretty crazy about gianduja, the heavenly combination of chocolate and hazelnut that Italians worship in both solid and spreadable formats.

There is no better place on earth to experience the glory of gianduja than in Piedmont’s elegant, capital city of Torino, which also happens to be the birthplace of both solid chocolate and gianduja. The smell of gianduja drifts out from dozens of chocolate shops and wafts right into Torino's streets, mingling with the aroma of espresso from the city's numerous elegant, grand cafés. If you’re a newbie in town, it can actually bring on a case of the vapors.

A fun challenge is to use a Chocó Pass to build a collection of gianduiotti, the individual bites offered at nearly every chocolate shop and confectioner in town. After a day of pounding Torino’s streets following the ChocoPass map, spread the bounty out on the hotel bed and have at it until your dinner is completely spoiled.

In New York, we can count on none other than the heroic Lou DiPalo of DiPalo Fine Foods to bring us our very own taste of Italy’s gianduja culture. You’ll have to wedge yourself in between the folks waiting in line for sliced prosciutto and cheese hunks to check out the sweet section of Lou’s tightly packed shelves, which always includes a rotating assortment of gianduja from some of Italy’s finest chocolate producers.

I love the super-creamy gianduiotti from Venchi; layers of milk and dark chocolate gianduja sandwich a layer of hazelnut cream. Lou also has huge loaves of Venchi’s same, three-layered concoction behind the counter, a rare find on this side of the Atlantic. Join the queue and he’ll slice off a dreamy slab of it to-go.

Lou’s brother Sal knows that my favorite gianduja is not from Piedmont, but from Cremona in neighboring Lombardy. The gigantic, gold-wrapped Zanzibar Gianduja Classico bar by the confectioner Sperlari is about as good as is gets, as far as Sal and I are concerned. It comes in both milk and dark chocolate varieties, but milk is my favorite, studded with deep-flavored, whole roasted hazelnuts. If you don’t see it, ask Sal, then watch him escape to a secret location to get one for you. The only drawback to the hefty, half-pound Zanzibar is that once you’ve opened it, there’s no turning back without a considerable stash of willpower, which is probably why they can’t keep them on the shelves for very long. I promise, it is that good.

Luckily, you don’t have to travel to Torino or New York to get a taste of Italian gianduja. Formaggio Kitchen, an online artisan food purveyor, carries an assortment of Venchi’s finest: creamy, layered gianduja bars, and Torronato, a mouth-watering combination of torrone and gianduja. You can also get Pernigotti's gianduiotti at chocolate.com. 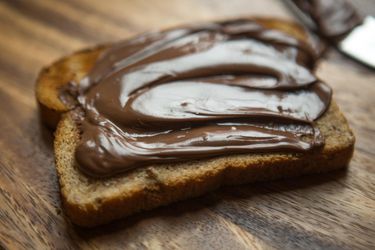