I'd like to put forth the claim that you can never have too many jars of kimchi. For starters, kimchi is one of the freshest-tasting and juiciest types of pickled things out there, so the jars probably won't be sitting in your fridge for long. But if you find yourself with an abundance of one of Korea's gifts to mankind, there are all kinds of ways you can employ kimchi in your cooking.

But first, a short primer on kimchi: What we call kimchi today—that spicy pickle with chili pepper powder, of primarily cabbage and daikon fermented with fish or other seafood—began some 400 years ago. Records indicate that Koreans have been pickling and fermenting vegetables in earthenware since well before the fourth century AD. As we'd expect, different regions of Korea produce distinct types of kimchi.

These distinctions were not altogether clear to me until I started reading The Book of Kimchi. Yes, there is an entire book written on the subject, which covers every aspect from the cultural ceremonies of making kimchi, the scientific principles of kimchi production, to the nuances of kimchi connoisseurship.

Kimchi from Kyonggi-do province, for instance, is richer and frequently employs yellow croaker and baby shrimp in its mixtures, whereas kimchi from Kangwon-do province is touted as "frugal and delicious," using crops like buckwheat and seafood such as pollack, clams, and anchovies for fermentation. There are regions that produce predominantly salty kimchi, and those that prefer very spicy kimchi.

In addition to cabbage and daikon, you can add pumpkin, mustard greens, soybean leaves, and seafood like flounder and abalone to the jar. Cooks in Buddhist temples who are refraining from using animal products make kimchi with pinenuts, peanuts, and steamed barley rice. There's even a type of kimchi made just for the elderly known as Suk Kimchi, which starts with radishes boiled slightly so they are softer in texture and easier to chew.

We've only really scratched the surface of kimchi enjoyment here in the states, and if you have access to a Korean market, take a look at the wide selection of kimchi that even a small store carries. Such is the importance of kimchi to the Korean meal. Herein are but a few suggestions for incorporating kimchi into your cooking:

Six Ways to Add More Kimchi to Your Life

1. Kimchi Soup: kind of a no-brainer. I've written about one of my favorite versions here, but try adding kimchi to any broth that needs a kick of flavor.

2. Kimchi Soondubu: Another post from way back when about Soondubu Jjigae, that soothing dish of soft tofu stew cooked in individual clay pots. To preserve the spiciness and crispness of your kimchi, add the pickled vegetables towards the end of cooking time, before you crack in your egg.

4. Kimchi Fried Rice: Before adding the kimchi to your pan, chop it finely and squeeze out some of the juice so that the pieces of cabbage will brown slightly.

5. Kimchi Pancake: Like Korean latkes, sort of. The potatoes are grated and squeezed of their juice, finely chopped kimchi is added along with aromatics, eggs, and flour. The batter, which is pan-fried, can take additional ingredients that you have on hand too (seasonal corn, zucchini, and so forth.)

6. Kimchi Dumplings: One of my new favorite ways to use kimchi. Replace some of the fresh napa cabbage with kimchi if you have a meat and cabbage dumpling recipe. Or, forgo meat altogether and use tofu and vermicelli noodles in addition to kimchi in your filling mixture. As long as the filling holds together with egg or some other binding agent, you almost can't go wrong with your kimchi combination.

Now it's your turn! How do fellow kimchi lovers use up their jars? 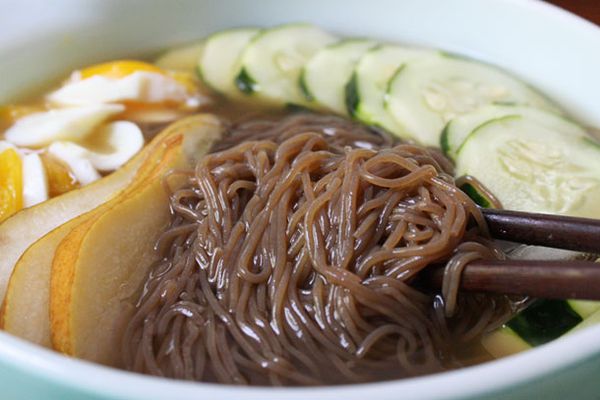