Wontons have always struck me as the unappreciated cousin of the dumpling. Since dumplings are broadly defined as any wrapper and filling combination, wontons are technically a type of dumpling rather than its relative. But I often think of the wonton as distinct because it's considerably easier and more forgiving than the Chinese jiaozi or Korean mandu. In this sense, Japanese gyoza, which are usually referred to as dumplings, have much in common with the wonton because both tend to use thin and pliant skins.

For the home cook, the wonton has two distinct advantages over the thicker flour dumpling. First, while it can be difficult to find a store-bought dumpling skin that has the chewiness and suppleness of the homemade variety, good-quality wonton skins at the store are not much different than what you can make at home. Second, the thinness of the wrapper also makes the cooking process less likely to fail. Judgments about length of cooking time is less crucial for the wonton than the dumpling, since the latter requires that the skin be neither doughy (undercooked) or gluey (overcooked), while wontons will reach a point of doneness and hold that texture for a good thirty seconds, giving the cook much more leeway.

And though not all wonton wrappers include the addition of an egg, having that addition yields more pliant and manageable wrappers. (Think about the parallel to the noodle: Just as making flour-and-water noodles can be trying, flour-and-egg noodles are almost always good.)

Finally, like dumplings, wontons can be enjoyed in a number of ways: boiled, with a dressing of soy sauce, chile oil, and various other condiments; pan-fried or deep-fried and dipped in sauce; or served in soup broth. When I make wontons I use up at least two packs of wrappers and freeze half the batch. Freezing the wontons makes no difference to their taste and texture, and makes for a quick and flavorful meal on a rainy day. 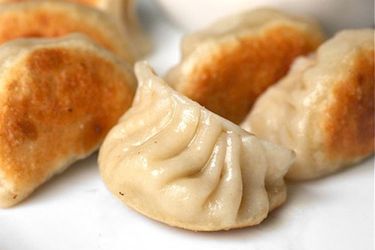 How Can I Get My Dumplings Extra Crispy? | Ask The Food Lab 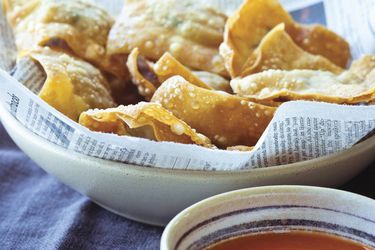