Waking up early in Israel was never a problem for me. There was always a bountiful breakfast spread waiting, and it's the best feast of the day. Fresh vegetable salads, salty white cheese*, hummus, baba ghanoush, pickled fish, olives (in various colors and shades of green to black), shakshouka (served in its cast-iron pan), cottage cheese (definitely not the diet kind—it was like eating cottage cheese for the first time), flakey bourekas, still-warm breads, butter, and preserves.

The big breakfast tradition began with kibbutz workers who'd work in the fields before dawn and were ravenous by the time 7 a.m. rolled around. Gathering around the communal table for a hearty breakfast, they'd eat whatever was grown and produced at the kibbutz. Vegetables, fresh cheeses, juices, and milk. Israelis all over adopted this kibbutz breakfast model, and still start their days with a mezze-style spread of salads, hummus, and other dishes the rest of the world might wait until lunchtime to start eating.

I asked multiple Israelis for the name of this cheese, and they all responded, "oh just salty white cheese."

Shakshouka is one of my favorite foods. Whenever shakshouka is on the menu, I am ordering it. The Israeli workingman's breakfast is simple: eggs cooked in a stewed tomato sauce with plenty of garlic and spices. And! Served with a side of bread to wipe up that glorious shakshouka swamp. One of the best parts is the serving vessel: the same pan in which it was cooked.

Eggs in Purgatory or Moroccan Ragout—you'll find the same concept around the world (though shakshouka is the most fun to say).

A Moroccan recipe, but similar idea. Skip the merguez and ras el hanout if you want to keep it a little more Israeli.

These savory pastries made their way to Israel by way of the Balkans. They can be filled with all sorts of cheeses and veggies. Rectangles, helixes, crescents—they come in many shapes. Janna Gur, author of The Book of New Israeli Food, an amazing source on Israeli culinary culture, shared this recipe for These Cheese Bourekas. Store-bought puff pastry dough is fine, then stuff it with a wonderfully salty mix of cheeses.

The salad is the centerpiece of the Israeli breakfast spread. A huge bowl of freshly diced vegetables: cucumbers, tomatoes, onions, bell peppers. Keep it simple.

Much more filling than a bowl of cereal, a bowl of hummus is typically eaten for breakfast in Israel. The chickpea caviar starts with dried chickpeas soaked overnight that are then cooked and blended with lemon juice, garlic, and usually tahini. Rip apart pita; dunk.

Eggplants: they've been around for a long time in the Middle East. An old Arab adage goes something like, "if she doesn't know how to cook eggplant 50 ways, don't marry her!" The eggplant is revered in this part of the world. Beside the familiar elongated type, there are stubbier eggplants and tiny ones used for pickling. 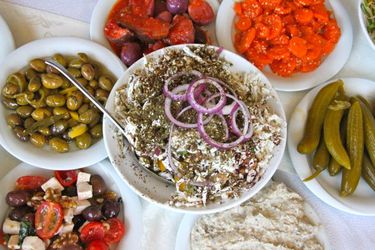