When people think of Greek food, they typically envision diving into a ripe tomato and feta salad or eating simple grilled fish livened with lemon and olive oil. This is because most people visit Greece in the summer, when fresh salads and a plate of seafood is all you need to accompany your frappe and burgeoning tan. However there are plenty of dishes for the other seasons; hearty stews and roasts that are best eaten in a sweater, not a swimsuit. In that spirit, here is a Greek menu tailored for fall.

Hearty stews are the perfect one-dish entree for fall. In this version, red potatoes and kalamata olives are simmered in tomatoes until the stew has become rich and the potatoes are tender. The beauty is how the starchiness of the potatoes is cut by the briny tang of the kalamata olives. Oregano adds an undeniable Greek touch, as do the cubes of salty feta that melt in the hot stew.

Count me as glad that spanikopita, or spinach and cheese pie, is so common in the United States. But count me as sad that hortopita, a similar pie made with a variety of wild greens, is not. Wild greens are very popular in Greece, where they're often eaten boiled in a side dish called horta.

While many greens that are common in Greece, such as dandelions or chervil, can be difficult to find, a combination of rainbow chard and spinach produces an equally delicious combination. I like baking this dish in a 9-inch springform pan to produce one big pie. This gives a higher filling-to-phyllo ratio and really places the emphasis on the chard and spinach. As with spanikopita, this pie is a satisfying combination of warm feta, buttery phyllo, and earthy greens. 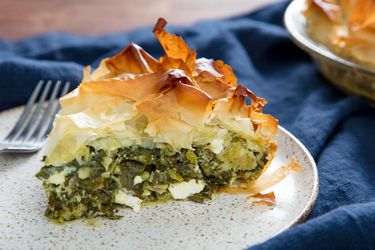