Serious Eats City Guides are back, and this week we're shipping up to Boston, where Boston Magazine's Amy Traverso gives us the rundown on Beantown from post-Fenway feeding to the best clam chowdah. Go Sox!

Always a tough one. For traditional pizza, I can never choose between the North End's Pizzeria Regina and Santarpio's in East Boston. Both have the tangy sauce, the crispy-chewy crust, and fresh toppings. Both date back more than 75 years. Both have thick-accented staffers and plenty of local color.

I can't pick one, but I can offer tips: Regina has several branches outside of the North End. Avoid! They're not nearly as good. At Santarpio's, be sure to order the housemade sausage, grilled over charcoal.

Bartley's Burger Cottage is a Harvard Square institution. Their secret? They grind their beef daily and don't pack the patties too tightly. A recent fire has temporarily shuttered the shop, but they'll be back.

A point of passionate debate here in Clamtown, but we like the creamy stew at Turner Fisheries in Back Bay.

One oft-quoted study named Boston has the ice cream consumption capital of the country. For that, I credit two spots, both in Cambridge: Christina's—which specializes in creative flavors like kaffir lime, carrot cake, and cajeta—and Toscanini’s, home to the world’s greatest burnt caramel ice cream and the genius micro-sundae, which fits in a little Dixie cup.

Stella is a very stylish restaurant in the very stylish South End. But when it comes to late-night eats, they know to keep things simple (and tasty): thin-crust pizzas, burgers, pasta. Yum.

Nothing can compete with Sunset Grill & Tap: 100 beers on tap, 380 microbrews, and a staff that really knows their beer.

Bin 26 Enoteca’s wine list reads like a guidebook, with selections from aglianicos through zinfandels. There are more than 70 wines by the glass and 200 by the bottle. And the food is very Italian (gnocchi with wild boar sauce, lamb shank with braised beans) and wine-friendly.

For years, office workers lined up rain or shine at Chacarero’s humble Downtown Crossing window counter for the excellent Chilean sandwiches (grilled chicken or steak, Muenster cheese, green beans, and a zesty avocado spread on a freshly baked bun). Now these same workers for their queues indoors at two snazzy downtown locations. The sandwiches are still a bargain, and still delicious.

A very relevant question for this new parent. When I don’t want to fuss with a full dinner, I love to sit at the bar at Oleana at order small plates like warm buttered hummus and tamarind-glazed short ribs. For a gourmet escape, I'm a big fan of T.W. Food, which does very imaginative French-inspired food using immaculate ingredients. And Persephone, in the Fort Point Channel district, is a terrific spot for delicious, cleanly prepared, locally-sourced food in an airy former warehouse space.

O Ya has won just about every major food award in the past couple of years, and they deserve the praise. Ken Oringer’s Uni is also excellent.

To really get the best, you need to head north of the city to the Clam Box in Ipswich, or Woodman’s or Farnham’s in Essex. But in town, I’d pick Morse’s in the South End.

John Gertsen, long admired for his bartending at No. 9 Park, is opening his new lounge Drink any day now, and there’s no doubt this will be the go-to spot for cocktails in Boston. Other worthy contenders include: Eastern Standard,Green Street Grill, and City Bar.

Most Worth A Splurge

Barbara Lynch’s No. 9 Park is the ultimate destination for luxury dishes like prune-stuffed gnocchi with foie gras butter. I try to go during truffle season because there’s always something amazing to eat. Meanwhile, L'Espalier has just moved into new digs at the Mandarin Oriental, and the team is really hitting fifth gear as they play around in their incredible new kitchen.

Not to dodge controversy, but the South End is the brunch capital of, well, Boston, if not New England, if not the East Coast north of New York. You could pick nearly any restaurant in the neighborhood and you’d have a winner (of particular note: Toro). But we’re especially fond of the brunch at Eastern Standard in Kenmore Square, where we love to down creme brûlée French toast.

Must Eat Before Leaving

Hungry Mother is one of my favorite new restaurants—a small storefront in an off-center Cambridge neighborhood serving fantastic French-Southern hybrid fare: the creamiest shrimp and grits and an excellent fried catfish with brown butter.

The Garden at the Cellar in Cambridge is our own version of a gastropub: excellent versions of bar classics like burgers and steak frites, with lots of creative fare thrown in (pork rilletes with pickled grapes, chicken and thyme croquettes, salt-roasted pear salad). The chef, Will Gilson, grew up on an herb farm, and he’s a master at sourcing great ingredients.

Eastern Standard is an always-popular brasserie in the heart of Kenmore Square (it’s located in the Hotel Commonwealth). The food runs from fancy to simple, and it’s a great spot to grab a burger and a beer before the game. Set aside a little extra time to sample from the incredible cocktail menu. Bar Manager Jackson Cannon is one of the best in the city.

There are several great markets around the city, but nothing quite matches Formaggio Kitchen. In fact, I'd argue that it's the best cheese shop in the country (and, yes, I’ve been to Murray's, Cowgirl Creamery, and the Cheese Board). Beyond cheese, there's a curated selection of oils, chocolates, spices, vinegars, pastas, and other foodstuffs from around the world, plus excellent produce and a small but impressive wine selection.

Best in the North End

Them's fighting words! Marco is my favorite Italian spot in the North End, featuring delicious Roman cuisine in a charming second floor pad with a working fireplace. For seafood, head to Neptune Oyster Bar and order whatever is on special. It’s really hard to go wrong with that approach.

Not to pick favorites, but the best street food is the sidewalk barbecue that happens every Saturday at Formaggio Kitchen during the warm weather months.

Four picks here. My favorite breads are from B&R Artisan Breads (don’t miss the levain) and Clear Flour Bakery (every sandwich should be served on their pain de mie). For sweets, I go to Flour for the best classic American and French pastry. And when I’m craving something more exotic, I go to Ana Sortun's new bakery/café Sofra, which has eastern Mediterranean treats, like Sicilian orange, chocolate, and ricotta croissants and warm pistachio katmer with cream.

Best Steak (In a Steakhouse or Elsewhere)

Prime meat, well sourced, dry aged, and perfectly seasoned. What more could you want? For a less pricey alternative, order the ribeye at Estragon. Of that steak our restaurant critic said, “It had the marbling and much of the softness of Kobe beef, and superior flavor, for a better price.”

B&G Oysters wins for the sweetness of the meat, the perfectly grilled bun, and the delectable fries that come alongside. Neptune Oyster Bar is a very close second. 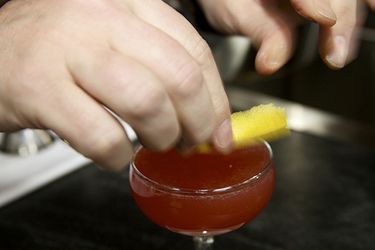