"Clarified butter is drizzled on top of the patty and copious amounts of salt and pepper are added throughout the cooking process. This is one pampered burger."

In the months before Minetta Tavern re-opened under the auspices of Keith Mcnally and chefs Lee Hanson and Riad Nasr it seemed that there was almost as much focus on the possibility of the restaurant serving the Black Label burger as on its renovation and other menu items. Since its opening last week, the hype has only intensified—virtually every account of the place mentions the Black Label burger.

Not that it was inevitable that the blend would be served at Minetta Tavern. Hanson and Nasr literally tried a dozen different blends from New York's top meat purveyors, including four different ones from La Frieda alone. Nasr recalls one tasting in which a large table at Balthazar—one of the duo's other wildly popular restaurants—was completely covered in bisected burgers. So many, in fact, that the exercise required notes like a wine tasting. But once the results were tabulated it was clear that the Black Label from La Frieda was far ahead of its competitors.

The Black Label blend includes aged ribeye, skirt steak, and brisket, the ratios of which are a closely guarded secret. All the beef is prime and sourced from Creekstone Farms, Kentucky. The ribeye used in the Black Label is the same cut that is on the menu at Minetta Tavern for $90 (and is worth every penny). Nasr says that it is important to use prime grade beef because, due to its intense marbling, less external fat is required in the the blend, thus concentrating the beef flavor.

After exhaustive testing Hanson and Nasr requested that the flavor of dry aging be dialed up in the mix. I assumed that this would entail merely adding more of the moldy fat from the outside edge of the primal cut, but Pat La Frieda explained that he uses the muscle because the fat, especially from dry aged meat, would be too mushy. To elicit the flavor using muscle rather than fat requires beef that is aged for a longer period of time. If you are wondering why the hamburger at Minetta Tavern cost $26, the answer is in the dry aging box.

Once the beef blend was determined, the focus shifted to the supporting ingredients. "We originally wanted to try a potato rolls," says Nasr, but after consulting with head baker Paula Oland of Balthazar Bakery they decided that the Black Label needed a custom bun. "We have one of the top bakeries in America and we would foolish to not use it," states Nasr. The result of the collaboration was a brioche with a dark tan crust studded with sesame seeds—they add a pleasing "nuttiness," notes Nasr—with a creamy, eggy interior not unlike challah bread. The bun is about as sweet as a potato roll—in other words, far less cloying than most brioche. It also has far more salt and butter than normal—the bottom of the roll is greasy like a croissant. It is baked a day in advance so the bun can harden slightly overnight, allowing it to become more robust. It is then cut ahead of time to allow the open face to become slightly stale and better stand up to the torrents of juice that the Black Label patty gushes.

The Black Label was originally served in the same manner as the "regular" blend ($16) that is on the Minetta Tavern menu—with cheddar cheese and caramelized onions. (Nasr laughs at the fact that the other burger on the menu is now referred to as "regular" because before the Black Label was developed it was La Frieda's premium product.) But the ultimate decision was to serve the Black Label sans cheese. "I don't think it needs the cheese," states Nasr although Hanson counters that he still eats his with the cheddar—a tangy and sharp variety from Pennsylvania. While they will let you order it with cheese if you want, I recommend that you first try it without and see if you think it's missing anything. I don't think you will, but it's nice to know that you have the option to add cheese at no additional cost.

The onions remain on the burger. While I don't usually order my burgers with cooked onions, the ones here—adhering as they do to classic technique (they could easily be the basis for the French onion soup at Balthazar)—are quite special and are far more involved that your average fried onion. They are sautéed ahead of time to the point where they just begin to caramelize but still retain a bit of snap.

The Black Label blend is delivered daily in loose-packed bags, and the patties are hand formed and weighed out to over eight ounces each. The beef—from grinding (or more accurately chopping) to the formation of the patty—is worked as little as possible. The result is an extremely fluffy burger that retains its juices. The patties are tempered ahead of time in the same way that one might do with a steak.

"We installed a plancha to do seafood," says Nasr "but now we only use it for the burgers." The griddle is not as searing hot as one might assume—the Black Label cooks differently from other blends and produces such a thick crust that it can be difficult to achieve even a rare internal temperature without completely burning the outside when cooking on high heat.

Grapeseed oil, chosen for its high smoke point and flavor neutrality, is applied to the griddle to prevent the patty from sticking until it develops a crust. The patty is gently placed on the griddle and pressed down with just enough pressure to ensure complete contact with the cooking surface. Clarified butter is drizzled on top of the patty and copious amounts of salt and pepper are added throughout the cooking process. This is one pampered burger.

The griddle may not be turned up all the way, but it's still plenty hot and smoke billows from the sizzling patty.

Once the patty has developed a decent crust it is gingerly turned over, treated more like a delicate piece of fish than a hamburger.

After the burger is cooked to order—the chef uses a simple metal skewer to check the internal temperature, pressing it on to his lower lip—it is left to rest like a steak to allow the juices to redistribute within the patty. While the burger lounges, the onions are griddled in the beef juices to a deep char. This only takes a moment before they are placed on the burger to rest while the bun is prepared.

The bun is toasted under a broiler, a crunchy ring burnished onto its outer circumference. The patty and onion stack is then placed on the griddle for a minute or so to bring the exterior temperature up before being placed on the bun.

The french fries are cut a day in advance and soaked in water overnight to remove the starch, decreasing the chances that they will stick when frying. They are then dried and blanched at a low temperature in peanut oil just long enough to cook them through, but not turn them golden. Then they are left to rest.

When it is almost time to plate the hamburger the fries are dropped into scalding oil and fried until golden and crispy. After a liberal seasoning of salt, an extremely generous portion is deposited next to the burger. They are indistinguishable from the fries at Balthazar, which are arguably the best in the city.

The finished burger looks so simple, completely belying the rigorous preparation involved in bringing it to table. Although the bun might appear too large, it is so light and airy that as it compresses and conforms around the plump patty the beef-to-bun ratio is actually spot on. The acridity of the onions balances the subtle sweetness of the bun, allowing the flavor of the beef to be fully realized. The Black Label is simply ethereal—tender, succulent, and brimming with the flavor of dry aging: that musky, Roquefort-like tang that is so intoxicating.

I called Pat La Frieda and Mark Pastore of Pat La Frieda Wholesale Meats to ask what they thought about the way the Black Label came out at Minetta Tavern. They were both unequivocal in their praise. La Frieda called the burger "perfectly executed" and said that "we are lucky to be working with Riad and Lee—they are the right guys for the job." Furthermore, it made all the late nights and hours of research and development "worthwhile." Pastore called the effort "more than I could have hoped for" further iterating that eating a Black Label burger at the Minetta Tavern is "like biting heaven." 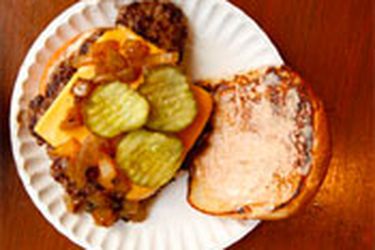 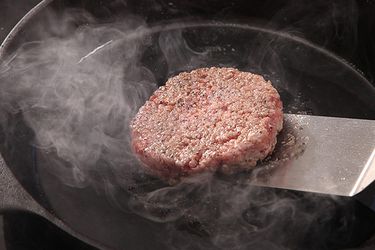 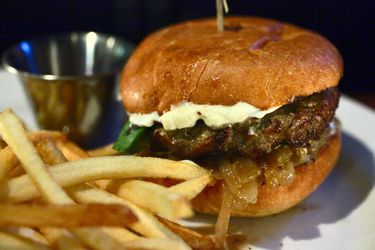 What Defines a Gastropub Burger? 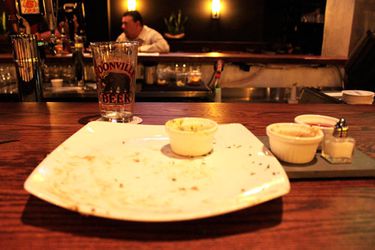 Berkeley, CA: The Good Life at Meridian with Burgers, Beer, and Ball 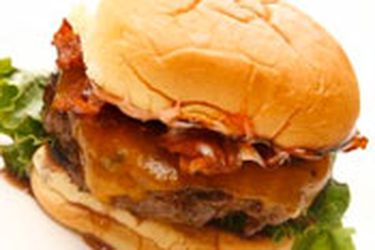