The look has a vague resemblance to pig tails. Not the ones attached to heads of little girls, but the ones attached to actual pigs. And the flavor is all oink. But it's the texture that's the star of the show when it comes to Danish crispy pork cracklings: partly firm, cracking under the pressure of your teeth, and partly buttery with a more gentle crunch. If you're the type of person who, like me, occasionally enjoys munching on pigs, welcome to heaven and say hello to the flæskesvær, as pork cracklings are called in Danish.

In Denmark, pork cracklings are not merely a snack, but an integral part of one of the most quintessentially Danish foods around: the pork roast. Here, pork roasts are eaten throughout the year and in innumerable varieties. Making smørrebrød? Pork roast. A sandwich? Pork roast. Tuesday night dinner with the family? You guessed it! Hell, the Danes even star the pork roast as one of the main attractions in the sumptuous Danish Christmas dinner.

But even if the pork roast is ridiculously popular in Denmark, the most popular part of the roast is the crackling. And the street food version, which has been clever enough to do away with the actual roast, is popular too. In butchers across the nation, they're made daily and served in paper bags, a bagful providing comfort and fat that'll last you most of the day and into the night. There are, of course, horrible (horrible, I tell you!) industrially processed versions in the supermarkets, but die-hard fans wouldn't dream of getting them from anyone else than their local butcher.

Growing up in Sweden, this fantastic snack was almost completely unknown to me until I met my Danish wife some 14 years ago. But I've more than made up for that since, grabbing every chance I get to sink my teeth into one of these crispy bombs of artery blocking pork skins.

Check out my recipe if you want to make these at home. 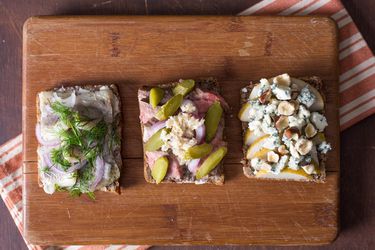 Meet Smørrebrød, the Best Sandwich You're Not Eating