I come from a savory-breakfast family. Our morning meals were usually filled with crispy fried eggs and warm flatbread to scoop up turmeric-tinged potato hash. But, as great as that sounds to me as an adult, all I wanted as a child were marshmallow-loaded cereals, ice-it-yourself toaster pastries, and sticky, syruped French toast. My mother tried her hand at French toast, but inevitably, nothing could stop her from loading it up with minced Thai green chilies, pungent raw onion, and heaps of black pepper. To her dismay, I’d still pour Mrs. Butterworth’s all over it.

Now that I have the agency to season up my French toast however I want, I’m set so solidly in the savory-breakfast camp that my eyes look right past the cinnamon and vanilla every time. This green curry French toast is inspired by my mother’s simple version with Thai green chili and onion. In contrast with the creamier milk-and-egg mixture used for a more classic French toast, hers was more of an eggy bread, with just a splash of milk to thin it, and loaded with texture from diced onion. My French toast takes a cue from both worlds, soaked in a creamy coconut curry for that custardy center we all recognize, but with the pungent and spicy flavors I grew up on.

I start by thickly slicing a rich bread, such as brioche or challah, into fat, one-inch slices. Using thicker slices will give you more of that creamy, custardy center to contrast the crispy exterior, while the tight crumb of a rich bread sops up the filling like a sponge and offers a hint of sweetness to the dish.

Dry and hard stale bread is key to holding on to all that curry custard without falling apart. The staling process is due to a combination of moisture loss and retrogradation, by which, after cooking and cooling, the starch molecules in the bread recrystallize into something much stiffer than before. In the cool temperatures of a refrigerator, the staling process moves swiftly, so I like to prepare for French toast by slicing and staling bread in the refrigerator the day before it'll get soaked. I leave the sliced bread, unwrapped, in a dish in the refrigerator overnight, which quickly gives me stiff slices that readily drink up the custard without falling apart.

For the custard, I keep it simple by starting with a store-bought curry paste that I gussy up to my taste. In a blender, I combine the curry paste with coconut milk, fresh cilantro and scallion, lime juice, and fish sauce before blending in eggs. In a high-speed blender the custard will come out completely smooth. But if you're using a standard blender, don’t worry about straining out any bits left behind—after you've cooked it up, the additional texture isn’t noticeable. In its raw state, the custard won’t taste like much, but once it's cooked, the aromatics wake up and become complex and developed.

I pour the curry custard into a wide and shallow casserole dish or roasting pan, which allows me to lay out the bread in an even layer. I flip the bread in the custard, coating both sides, before setting it in the fridge overnight to fully soak. Then I give it another flip sometime in the early morning for even soppage. If you need French toast in a flash, an hour-long soak will also do, but keep in mind that the custard may not get to the core of the bread with such a quick dip—unless you happen to have a chamber sealer kicking around. In which case, you can divide the bread and custard between two large bags and put them under pressure in a chamber sealer, yielding fully soaked slices in about 12 seconds flat, ready to fry up. But this works only in a chamber sealer, which creates a vacuum that sucks the air out of the bread while pulling in the custard—don’t try this with a FoodSaver, unless you want a mess on your hands.

After the bread is fully soaked, I slowly fry up the slices in butter over medium heat, allowing them enough time to cook through before browning. The French toast is enough on its own, but I like to top it with a crunchy fried egg and a drizzle of molasses or maple—because there's a part of me that will always want to smother stuff in syrup. 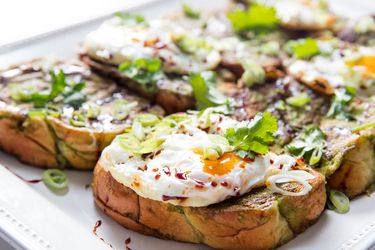