Editor’s note: This recipe originally appeared as part of the Sauced series that explored recipes for popular condiments.

If you've made some of our sushi recipes, you've probably seen this recipe I posted for the ubiquitous spicy mayo commonly served with sushi. In doing so, I found that a mere two ingredients—Kewpie mayo and sriracha—combined to make something pretty dead-on delicious. Before publishing that post, I wondered if I should go more in depth and build the sauce from the ground up, but ultimately decided that there's nothing wrong with a really accessible and easy sauce, so long as it works.

It came as no surprise, though, that Serious Eaters wanted to know more—specifically, why Kewpie mayo, and what makes it different? Ever since then, tackling a great homemade Japanese-style mayonnaise has been on my to-do list, and I finally took some time to delve into the depths of this super tangy and extra-creamy sauce.

While Kewpie is certainly mayonnaise, pit it against its more commonplace brethren, like Hellmann's, and a whole host of differences quickly reveal themselves (you can read more in our mayonnaise taste test). Those contrasts are stark enough that this Japanese sauce finds itself with die-hard devotees; even some who say its Kewpie or nothing.

Kewpie itself is not a style, but a brand. It was born in 1925 in Japan and became so popular that the baby with outstretched arms, which adorns each package, has come to symbolize Japanese mayonnaise as much, if not more, than the original Kewpie doll it was based on. Compared to standard American supermarket mayos, Kewpie has a smoother and thinner consistency, tangier character, and depth of spices that clearly distinguishes it from its more subtle cousins. It's also got a touch of MSG, one of the triggers for the taste we call umami, which further distinguishes its flavor.

Finding a base for my recipe wasn't all that hard, since the ingredients are more or less printed right there on the bottle: vegetable oil, egg yolk, vinegar, salt, monosodium glutamate, and spices. Of course the devil is in the details, and it took five tries to get this sauce to a respectable place.

The Search for Spice

The first few major differences between regular and Japanese mayo came easily—up the egg count, drop the egg whites, switch to vegetable oil, use rice vinegar instead of white, and add MSG. The latter is a controversial ingredient, but if Japanese mayo flavor is what you're going for, it's essential.

With these changes, it only took minor tinkering with the amounts of each until I had a mayo that was evocative of Kewpie in both flavor and consistency. Still, tasted side-by-side, the Kewpie mayo had a depth mine was clearly lacking, which I figured came down to that ambiguous set of ingredients listed only as "spices."

I started trying to develop those important undertones by adding hot mustard powder and garlic powder, which certainly helped give the mayo a slight kick, but didn't quite get me all the way there. Then through some internet scouring, I found others saying that powdered dashi was the "secret" ingredient. I added just a little bit of that briny soup base (dissolving it first in the vinegar) to my recipe. With one taste, I bought into the dashi addition—it added that little bit of extra flavor you couldn't quite put your finger on. Even then, though, I could tell I was missing something.

Noticing my mayo was pale in comparison to the Kewpie that came out of the bottle, I started to think of what might give it a slightly darker hue and a little more pop. After doing some more research, one ingredient sometimes attributed to Kewpie caught my eye: malt vinegar.

I rummaged through my cupboard looking for the malt vinegar that I was sure was there, but it never materialized. That forced me out on a maddening search through every local grocery store and bodega for the stuff, only to come up empty-handed. Determined to perfect the mayonnaise, I found myself on the subway, and finally located a bottle in a grocery a few stops away. Luckily, it wasn't in vain—the malt vinegar did add just enough extra depth to leave me satisfied with my final product.

It may not be an exact replica, but the final recipe produced a silky mayonnaise with a strong tanginess, distinct saltiness, and the right amount of spices to create a flavor that is unmistakably of Kewpie influence. So now any of you super-DIY folks out there can make both your Kewpie and your sriracha from scratch, and then combine the two for a totally homemade sushi mayo. I'll probably still take the easy way out, but it's good to finally know what makes Japanese mayo so different and crave-worthy.

After additional testing, this recipe was updated with instructions for using an immersion blender.

Monosodium glutamate is essential to the flavor of Japanese mayonnaise. It can be purchased from most Asian grocers under the Aji-No-Moto brand, in American supermarkets under the brand name Ac'cent, or online. Hondashi can be found in Japanese markets or ordered online. 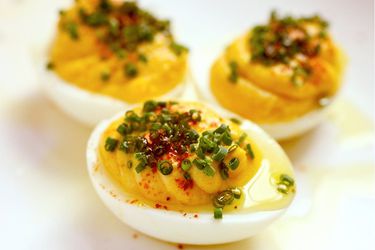