Miami's sunny landscape is dotted with palm trees and just as many Cuban cafés like La Carreta, Oasis, and Versailles. These are establishments where you can have a seated meal, but what's more charming is the invitation to walk up to an outdoor counter and order a quick breakfast of café con leche and tostadas, an afternoon caffeine lightning bolt of concentrated cortadito or café cubano, and late at night, a medianoche sandwich.

This habit of eating on your feet among a friendly crowd, where everyone seems to know each other, and melodious Spanish is spoken almost exclusively, has its roots in Havana. Cubans who fled to Miami brought with them their unmistakable accent, their food, and their gregarious eating customs.

I've heard that after a long night of dancing, people would stop for a medianoche, so named as an allusion to the time it was often eaten. At midnight. The pressed, toasted sandwich is made with pan suave, a sweet egg bread similar to challah or Hawaiian bread. The filling is lechón, slow-cooked marinated pork, ham, cheese, pickles, butter and mustard.

Sweet, salty, and deeply satisfying, it's a sandwich you'll crave at all times of the day.

For this recipe, I took a slight shortcut, given that I don't have a whole pig on hand. Quick-cooking pork tenderloin is marinated with mojo, a mixture of orange juice, lime juice, lots of garlic, oregano, and a dash of cumin, then roasted. Make sure to press the sandwich either with a spatula or panini press to for the signature compact, crisp look.

Medianoches are usually made with "pan suave," a soft, sweet bread. Since it is not widely available, I've substituted it with 6 inch-long challah rolls, which are sweet and soft like the original. 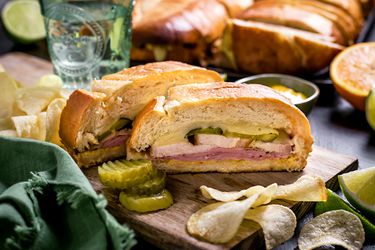 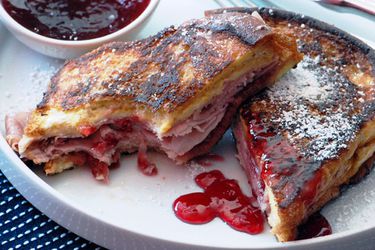 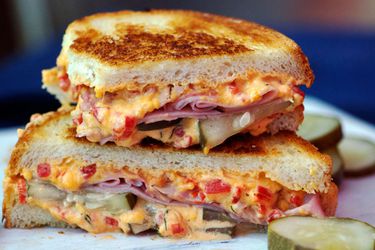 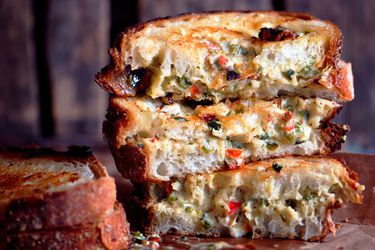 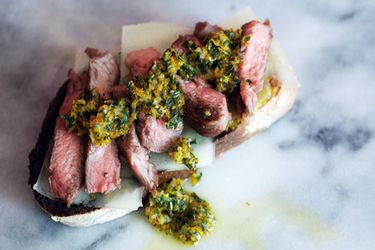