The tacos I grew up with were awesome. My mom would put out a large plate of crisp Ortega taco shells along with dishes of sour cream, shredded iceberg lettuce, canned refried beans, "Mexican" cheese, some homemade guacamole (if we were lucky!), chopped onions, tomatoes, and an electric skillet-ful of ground beef seasoned from a packet.

As a kid, you couldn't ask for a better meal. You eat it with your hands, it's fully customizable, and it offers plenty of opportunities for accidentally-on-purpose creating a mess. To this day, I still enjoy that decidedly North-of-the-Border take on one of the great foods of the world.

That said, they don't hold a candle to the real deal. I'm talking the diminutive, double-stacked-corn-tortilla, animal-part heavy, meat-centric real-deal Mexican version, the best of which need little more than a sprinkle of cilantro, a spoonful of chopped onions, a drizzle of hot chili-based salsa, and perhaps a squeeze of lime.

East Coasters have it tough. I've yet to find a truly great taco in New York (suggestions?), and since moving from Boston, my visits to the incredible Rosticeria Cancun in East Boston (whose tacos de lengua are the stuff dreams are made of) have been few and far between.

So when I found myself visiting a friend in San Francisco last weekend—in the Mexi-heavy Mission District, no less—I took it upon myself to find the best of what the area has to offer. With a little help from my Facebook and Twitter friends, I whittled my list down to 11 taquerias.

Attempting to eat every taco in the Mission in a single day would be like trying to take a shot every time Luke Skywalker whines in Star Wars—not a wise move for those who want to live to the end of the day. So I decided off the bat that I'd limit myself to the taquerias within walking distance of the 24th Street and Mission Ave. BART station, one of the more popular strips in the district.

Here are the taquerias we visited, in order from East to West.

Tacos wear many hats. They can be filled with grilled meats or steamed/braised offal. Salsas range from green to red, hot to mild, fresh to cooked. That said, there are a few things every taco should have in common, and those are the criteria by which we judged.

In order to set a benchmark standard, we decided that at each location, we'd order at least one taco with carnitas (by the way, here's how you can make 'em at home), along with a couple more filling options that looked appealing. In a few rare cases, carnitas were not an option, so we had to use our best judgment during ranking.

If you allow me to quote myself here from my explorations into carnitas:

Carnitas. The undisputed king of the taco cart. The Mexican answer to American pulled pork, at their best they should be moist, juicy, and ultra-porky with the rich, tender texture of a French confit, and riddled with plenty of well-browned crisp edges. The most famous version of the dish comes from Michoacán, in central Mexico. Delicately flavored with a hint of orange, onion, and occasionally some warm herbs or spices like cinnamon, cloves, bay leaf, or oregano, all it needs is a squeeze of lime, some chopped onion and cilantro, and simple hot salsa to form a snack of unrivaled deliciousness.

Those are the standards by which we judged each restaurant's version.

As our tasting progressed we noticed a definite trend emerging: the further west we traveled, the lower the overall quality of the tacos got. It was so striking that I decided to make a quick graph charting our westward progress with the relative quality of the tacos. Check it out:

I just realized that this graph is not actually simply the distance of the taqueria from the BART station—it's actually the order in which I visited them, which generally followed an east to west route, with a couple of detours off of 24th Street to hit a couple of the locations. Either way, the general trend is accurate.

What I find most interesting here is that beside from the two best taquerias, which are clear outliers, the rest of the taco joints follow a very strong quality trend: the further east you go, the better they get. This makes a lot of sense, seeing as west of Mission Avenue is much more heavily gentrified (read: gringified) than East, which still has a large and vital Mexican population. It's just neat to see it in an actual graph.

Anyhow, enough nerding out. On to the winner:

It figures that the best tacos of the day would come from a truck, and a very friendly one at that. They're best known for their extraordinarily tender and flavorful chicken, but everything we tried was outstanding.The carnitas were textbook tender, flavorful, juicy, and perfectly crisped on a hot comal. Equally good were the carne asada.

Into pork fat? The chicharrones are thick slices of pork belly cooked down with beans. Delicious. We liked these so much that despite our bulging bellies, we actually ordered a second round of them. Noting our enthusiasm, the proud lady who was both cooking and serving our tacos offered us a free taste of their signature roast chicken taco. It was stunningly moist, with a rich texture and flavor that bordered on porky.

The salsa is bright, fresh, complex, and hot, while the onions and cilantro (applied sparingly) are as freshly cut as you could hope for. My beloved Rosticeria Cancun may have found a new competitor.

For a full breakdown of the taco crawl, peep through the slideshow »

More of the Best! 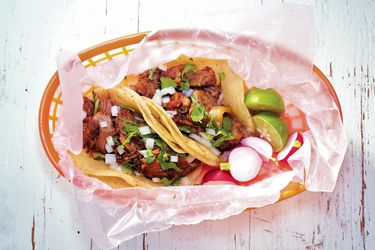 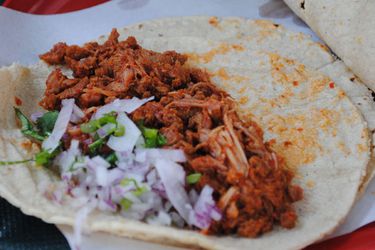 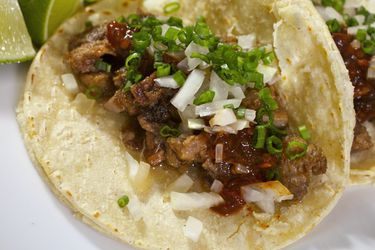