It's one of those cautionary kitchen sayings I used to hear all the time in my restaurant days: Don't put salt in the bean water, or those beans will never soften! In fact, I knew one cook who went so far as to suggest that one could save overcooked beans by salting them after the fact. (No, it didn't work.)

Is there any truth in this advice? In my experience, I have never had a problem with cooking beans directly in salted water. But I also know that all the anecdotal evidence in the world doesn't amount to a, ahem, hill of beans, so I set up a simple side-by-side experiment to test the theory out.

Long story short: For the best, creamiest, most flavorful beans, season your bean-soaking water with one tablespoon of kosher salt per quart (about 15 grams per liter), rinse the beans with fresh water before cooking, then add a pinch of salt to the cooking water as well.

Read on for the testing details.

Although some types of beans don't require soaking before cooking (most notably black beans), I typically soak my dried beans to cut down on cooking time and ensure that they cook more evenly. This means we have two different opportunities to add salt to the beans: during soaking and during cooking.

I bought two pounds of dried cannellini beans and split them in half. One half I soaked overnight in salted tap water (one tablespoon of kosher salt per quart of water), while the other half I soaked in unsalted tap water. I used a precise scale to ensure that I was starting with exactly one pound for each batch.

The next day, I compared the two containers side by side. Surprisingly, the unsalted beans had grown significantly more in volume than the salted beans had. There was a clearly visible difference in their size change.

Interesting, but how would this difference in absorbed water affect the texture and flavor of the cooked beans?

I further divided each set of beans in half, cooking half in salted water and the other half in unsalted water, creating four different samples total.

In addition to weighing the finished, cooked beans, I weighed each sample and examined a random selection of 40 beans from each, counting the number of beans that had burst or that showed major imperfections. (I didn't count slightly peeling skins or tiny cracks, which are unavoidable in my experience.)

Turns out that despite absorbing more liquid, unsalted beans are actually much more prone to bursting out of their skins than salted beans are, and, more importantly, salting both the soaking water and the cooking water seems to help.

After draining all the beans, I seasoned the beans that were cooked in unsalted water with salt, then tasted them side by side. The beans that absorbed less water (i.e., the salted beans) had a more concentrated, better flavor, though it was hard to tease out whether the improved flavor was due to salt content—it could simply be that they were more evenly seasoned throughout. Either way, they were better than the unsalted beans, to the point that I'll never soak or cook my beans in unseasoned water again. The classic advice was wrong all along!

Soaking with distilled water produced creamier, more intact beans across the board, particularly in the unsalted batches, but it wasn't a big enough difference that I'd recommend switching from tap water.

According to Cook's Illustrated, it all has to do with the calcium and magnesium ions in bean skins. As the beans soak and cook, sodium ions in salted water will gradually replace some of those calcium and magnesium ions, which in turn allows for greater water penetration into bean cells. This is particularly true of the tough outer skins of beans.

When unsalted beans cook, their interiors can end up swelling faster than their skins can keep up with, resulting in skins that rupture instead of enlarging along with the rest of the bean. Salted beans will grow proportionally, resulting in fully tender, creamy, intact beans that are well seasoned throughout.

Moral of the story? Make sure to salt your bean-soaking water to the tune of one tablespoon per quart (15 grams per liter), and season the bean-cooking water as well. Just don't season the cooking water too heavily—it can reduce and become too salty to eat as the beans cook. 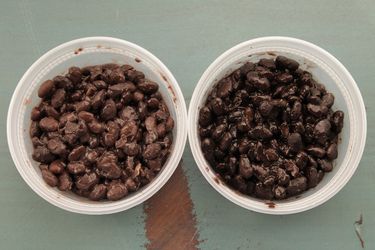