Roasting a whole fish in a casing of salt leads to juicy, flavorful results.

There's a poetry to baking a whole fish in a crust of salt. Stretching back billions of years, water flowing across the earth's rocks dissolved minerals like sodium and chloride to form salty seas that eventually grew full of life. When that sea water dries, the sodium and chloride ions bond and crystallize into the ionic compound that we call salt. Then, when we bake a whole fish in a crust of salt, we're entombing it in the hardened form of the minerals that had surrounded it its whole life.

But poetry doesn't get us to tasty. Is there any good reason to use this technique when a fish can just as easily be popped in the oven without a mountain of salt heaped on it? And what's the best way to go about the process anyway? How can you tell if the fish is done when it's buried under a hardened halite shell? This isn't a cooking method that's new to me, but I'd never approached it quite so methodically, until now. Let's crack the lid and take a deeper look.

Why Bake a Whole Fish in Salt?

Baking a whole fish in salt may look impressive, but it's a very easy thing to do. Simply moisten the salt, stuff the fish with whatever aromatics you want (herbs, citrus, etc.), rub its skin with oil, then bury it in the salt and cook until done. Yet it's not as easy as a basic whole roasted fish, which can just be stuffed, oiled, and popped in the oven without fussing with all that salt. The first thing I wanted to look at, therefore, was what differences there were, if any, between a basic whole roasted fish and a salt-baked one, which I did by cooking both kinds side-by-side using the same type of fish and the same aromatic stuffing in the cavities.

Good news! The salt is not just a party trick, it actually does something. By encasing the fish in salt, you gain two subtle but noticeable benefits. First, the salt enclosure acts as a semi-sealed cooking environment, trapping steam as the fish cooks—one might argue you're steam-roasting it. This steam hardens the salt into a shell-like casing and bathes the fish in moisture. The result is a fish that's juicer than its plain whole-roasted counterpart, which is saying a lot given that a nicely roasted whole fish is already high on moisture.

The second benefit is arguably even better. If you've ever cooked a whole fish before with its cavity packed with fresh herbs and other aromatics, you may have noticed that while the belly flaps immediately surrounding the aromatics absorb some of that flavor, the fillets on the dorsal side don't benefit as much.

Trapped in its salty tomb, however, the entire salt-baked fish is awash in the aroma of herbs, lemon slices, and more, and you can taste it in every bite. Just watch out, because this can backfire if you're not careful, as I learned during one test when a fish that I'd generously stuffed with fresh oregano—an herb I usually love to pack in a whole fish—came out over-infused with oregano's woodsy-menthol flavor. It wasn't pleasant. Use less of those heartier herbs than you normally would, or switch to more delicate herbs like parsley and tarragon.

Convinced that a salt-baked fish was a worthwhile endeavor, the next thing I wanted to map out were cooking times compared to a basic roasted fish. Exactly how quickly a fish cooks will depend on its size and shape, the thickness of the salt packed around it, and the oven temperature you're using, so there's no one answer. Those variables aside, I could still get a rough sense of the relative cooking times of a basic whole roasted fish compared to a salt-baked one to see whether the salt added significantly to the cooking time or not.

Running my two samples side-by-side in a 400°F oven, I recorded the temperatures shown in the chart below.

As you can see, the salt-baked fish took longer to come up to temperature, but not too much more slowly, trailing the naked fish by about 5 minutes—not a difference that would make me opt for one over the other, even if in a rush.

Worth noting, but not surprising, is that the carryover cooking was much more dramatic on the salt-baked fish, which makes sense given how that salt crust can act as an insulator, trapping heat and driving it deeper into the fish even after it's out of the oven. The black dot on each line indicates when I pulled each fish from the oven. The whole-roasted fish continued to rise in temperature at its thickest part for about four or five minutes, peaking at about 155°F or so before beginning to cool. The salt-baked fish, on the other hand, just kept on rising, crossing above a fish-ruining 160°F before I finally decided to rescue it by cracking the salt shell open and letting the steam out. It's worth factoring that in when cooking a fish in salt: You'll want to pull it even earlier, around 130°F or so, and then let it rest only five minutes before freeing it from its encasement. That should keep the fish at the more ideal final internal temp of around 140 to 145°F.

The Key Techniques for Salt-Baked Fish

While fundamentally a simple preparation, there are a few key details to consider when making a salt-baked fish, from how to moisten the salt to how to track its internal temperature for doneness.

How to Moisten: Egg Whites or Water?

When I was first taught how to cook a fish in a salt crust by the chef Dave Pasternack many years ago, he used egg whites to lightly moisten the salt, giving it a consistency similar to slightly damp sand. The goal is to get it just wet enough to pack around the fish without becoming a gloppy sludge. But a quick survey of published recipes reveals not only variations in just how many egg whites to add per pound of salt, but also the possibility that you don't need egg whites at all—because some recipes just call for water. In true Serious Eats style, the only way forward was to test it.

I used four large egg whites per 2 pounds of salt for one batch, and 3/4 cup water for the same mass of salt for the other, then baked two 1-pound black bass side-by side in well-calibrated 400°F ovens. The egg whites made a salt mixture that was a little easier to pack around the fish, while the water-moistened batch was a hair more crumbly, but both were ultimately easy enough to form into a saline burial mound.

After roasting there was an obvious visual difference. The egg white batch had browned (thank you egg proteins and our old friend the Maillard reaction). The water batch, meanwhile, had retained its snow-white appearance. But that's just looks. Both salt crusts had hardened into similarly hard shells that had to be cut open and lifted away in chunks, and both fish cooked beautifully and indistinguishably from one other.

The conclusion? Skip the egg whites, since they cost more money than tap water (hey, it's free where I live!) and make no obvious difference in how the fish cooks.

Skin Problems and How to Solve Them (Without a Dermatologist)

One potential pitfall of roasting a whole fish in salt is the skin can stick to the salt and tear away when you remove the hardened crust, making for a much less attractive presentation. Because the fish has been roasted in salt, the skin isn't really edible—it's far too salty—so you're not saving the skin to eat it. Instead, it helps shield the flesh below from loose chunks and bits of salt that might otherwise fall directly on it, making the flesh too salty too. With the skin on, you're able to safely clear away the salt first, then pull the skin free before filleting and serving.

Oil is your friend in this case. A good rubdown with olive or another oil before packing in salt will keep the skin from sticking to its container. This is probably a good time to also point out that there's no additional salting needed for a salt-baked fish, since the salt enclosure is more than enough to season the fish within.

The hardest part of cooking a whole fish in a salt crust is knowing when it's done. Because the salt crust is a sealed container that completely envelops the fish, there is no good way to examine the fish to determine doneness aside from inserting a thermometer into the flesh. But that also requires getting past the hardened salt first. There are two ways to do this.

My preferred method is to use a leave-in probe thermometer, as shown in the photo above. You can insert it into the thickest part of the fish (for most fin fish, usually just behind the head and deep in near the spine), and just leave it there, packing the salt around and sliding it into the oven. The probe connects via a heatproof wire to a unit outside the oven that will give you a temperature reading in real time, no need to even open the oven door until it's time to take the fish out.

If you don't have a leave-in probe thermometer (seriously, though, get one), you can make an instant-read thermometer work. To do that, pack the fish in salt, then use the probe of the thermometer to drill a hole down to the fish. That way, even after the salt hardens, you'll have an easy time sliding the thermometer in and checking the temperature of the fish.

As soon as it's done, take it out, rest it briefly, then crack open the crust using a knife and your hands, and it's time to dig in. Just like a plain whole roasted fish, you don't need to do much to it after you've removed the flesh from the bones. A drizzle of olive oil or another condiment of your choice is more than enough. 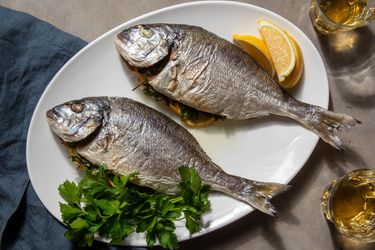 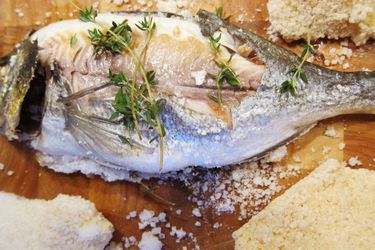 French in a Flash: Salt-Baked Fish Stuffed with Herbs and Lemon