A couple months back I was having dinner at Emilia Romagna, a fantastic Italian restaurant in my wife's native Bogotá, Colombia. We ate great antipasti and fantastic handmade pasta with sauces ranging from hearty meat ragús to lighter vegetable-based preparations. But the one thing that stuck out to me was the ratios: There was so much sauce, to the point that there was almost more sauce than pasta. I talked with the chef—Daniel Castaño, a Colombian native who spent time honing his craft at Mario Batali's restaurants in New York—about what was up.

His response? When he first opened the restaurant, he took a much more minimalist Italian approach to saucing: The sauce was there to accent the pasta. But the clientele in Bogotá complained that they were being charged too much for what mostly amounted to a bowl of noodles. So he upped the sauce more and more until the complaints stopped. The truth? I actually kind of liked it that way, authentic or not.

It's easy to fall into the all-carbs-all-the-time trap when you stick to a vegan diet. Pasta is just such an easy, inexpensive, and appealing meal. But the good news is that it's even easier to get out of that rut. The secret is to shrug off the shackles of authenticity and go full speed ahead with the sauce, bulking it up with tons of cooked vegetables. This is not new advice: Mark Bittman said the same thing in a New York Times article way back in 2007, but it's good advice nonetheless.

I started out my sauce thinking I could roast both types of vegetables together: I sliced zucchini and cherry tomatoes, tossed them with some salt, pepper, and olive oil, spread them on a foil-lined baking sheet, then tossed them in a 450°F oven to try to get some nice browning on them. The method works, but the zucchini has a strong tendency to stick to the foil, requiring you to very carefully pry them off with a thin metal spatula. They also tend to get too soft. The tomatoes, on the other hand, are wonderful when roasted at high heat. They tenderize and lose moisture, becoming very concentrated in flavor, their skins slightly blistering.

So I decided to combine two methods, roasting the tomatoes in the oven while sautéing my zucchini in olive oil on the stovetop. It takes a little bit of extra effort, but it doesn't take any extra time.

For even more flavor, I also decided to add some rosemary and garlic to the mix. I tried just tossing them with the zucchini for a quick sauté as well as adding them to the tomatoes while they roast, but I got the most harmonious flavor when I sautéed them separately in a bit of olive oil, cooking them very very slowly so that the garlic browned and sweetened without getting burnt or bitter.

Once the garlic and rosemary are cooked, the zucchini sautéed, and the tomatoes roasted, I toss them all together in the same skillet with a handful of fresh chopped mint and just a bit of tomato sauce. I used a jar of Rao's, the winner of our taste test and by far the best jarred sauce I've tasted, though if you have a homemade batch around like my slow-cooked red sauce, that's even better.

To this glorious mix I add about half the amount of pasta I'd normally use and toss it all together, simmering it on the stovetop with some of the pasta cooking water and another big drizzle of extra virgin olive oil until it's nice and saucy. And that's it!

No wait, I lied. We almost forgot the best part: a big sprinkle of my Dried Olive and Miso Shake that gets both stirred into the pot of pasta and sprinkled on top after plating. Vegan pasta never tasted so savory—or low in carbs! 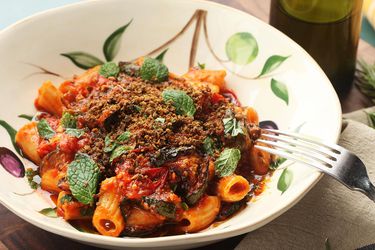