By slowly roasting whole tomatoes in the oven, the centers grow concentrated and jammy and they turn into a savory tomato "raisin."

Restaurants are not democracies. Chefs are tyrants and it’s a cooks job to shut up and listen, if they know what’s good for them. Sure, there are occasional exceptions, like the kitchen at Cosme, where Chef Daniela Soto-Innes leads her matching paisley headband–clad troops into battle with a round of team-building squats to get the blood pumping.

Unfortunately, I’ve never found myself working for a chef like that. When I was told to peel black walnuts while keeping each half perfectly intact, I didn’t ask questions. That’s exactly how I found myself blanching, peeling, and roasting cherry tomatoes while still keeping them on the vine to make “tomato raisins.”

It was for a glorified caprese salad—you know, one of the simplest salads around. Traditionally, this laid back salad doesn’t even ask you to whisk together a vinaigrette; just slice the best tomatoes and mozzarella you can find and gild everything with fresh basil, extra virgin olive oil, and coarse salt.

But this caprese was really meant to be a display of the chef’s power. First, buffalo milk burrata was overnighted from Italy three times a week. It was then topped with extra-virgin olive oil, coarse sea salt, and an aged balsamic vinegar worth more than my paycheck. In place of the sliced tomatoes was a little snip of tomato vine, with exactly seven roasted cherry tomatoes still attached, looking as though they had gently shriveled in the sun like raisins.

They didn’t, in fact, gently shrivel in the sun. Instead, I spent hours under harsh fluorescent lights delicately peeling each tomato while trying not to disturb the rest of the vine. If one fell off, the whole vine was unusable.

The process always left me with countless cherry tomatoes that had fallen off the vine, and I quickly developed a habit of snacking on them in their various stages of raisin-ness. Each little tomato raisin bursts with sweet, tart, and savory flavors—perfect as a snack, but even better added to strawberry shortcake, tossed into pasta, or alongside a pan-seared steak.

How to Make Tomato Raisins

These tomato raisins differ from the standard oven-roasted tomato because they are carefully kept whole, resulting in a thick jammy center rather than just concentrating the flesh.

Even though I’m no longer lorded over by a toqued thug, every summer I still look forward to roasting a big batch of tomato raisins—off the vine. They still require a bit of tedious labor to peel and a chunk of time to roast, but they offer another way to preserve your summer tomato splurge. Frozen in bags, you can keep enjoying their candy sweetness for months, on their own or even in a caprese salad.

Before blanching the tomatoes, I first remove the core from the stem end of each and carve an X on the opposite end. This is the most tedious step in the recipe, and ensures that the tomatoes are easy to peel after blanching. It’s best to get some friends for this, perhaps borrow a small child you trust with a knife, and get settled in front of TV for a Netflix marathon.

A sharp knife is vital, as the goal is to just score the skin without cutting too deeply into the flesh. If you score through the flesh, the roasting process will cause the tomato’s guts to burst, rather than gently concentrating their flavor to a jammy essence. I prefer to use a utility or tourne knife for this, but a good paring knife will also do the trick.

Once my water is at a rolling boil and I’ve set up a large bowl with water and ice to stop the cooking, I add just a handful of tomatoes to the water at a time. By working in small batches the temperature of the water doesn’t drop too much, so all it takes is a quick dip to loosen up the skins.

The tomatoes are ready when their skin begins to pull away from the flesk where it has been scored. I then scoop them up with a large kitchen spider before dropping them into an ice bath. This will shock the tomatoes, quickly cooling them down so they don’t continue to cook from the residual heat.

Once chilled, I use a small paring knife or even just my fingers to peel the skin off each. They should slip right off if you take the time to score and core them properly. I then line each skinned tomato up on a rimmed baking sheet (one of our essential tools) lined with parchment paper, which prevents them from sticking.

Step 2: Brush With Glaze and Roast

For the glaze, I mix together sugar and salt with a touch of water until the mixture resembles wet sand. It’s not enough liquid to dissolve the sugar and salt, but don’t worry; it will slowly melt in the oven as the tomatoes roast. I then stir in a touch of extra virgin olive oil which will infuse each tomato with its grassy aroma.

I brush each tomato with the glaze before popping the trays into a low oven. I don’t get fussy about fully coating each—just a dab is enough, as the glaze will melt over each tomato in the gentle heat.

I return to the oven every hour to rotate the trays and touch each tomato with a bit of glaze. Depending on the airflow in your oven and how ripe the tomatoes are to begin with, they can take anywhere from two to six hours to shrivel down to about a quarter of their size.

Once cooked down, I tend to curl up on the couch with the entire tray, but if I’ve got the will power I transfer them to a jar and top with olive oil for future endeavors. These tomato raisins can go where any roasted tomato has gone, but, as a bonus, their extra sweetness helps them play well in desserts—especially next to berries.

I like to tuck a few into fluffy whipped cream for a next-level shortcake or pile them high on ice cream with an extra dribble of olive oil. Free from the vine, these tomato raisins can go sweet, savory, and any place in between. 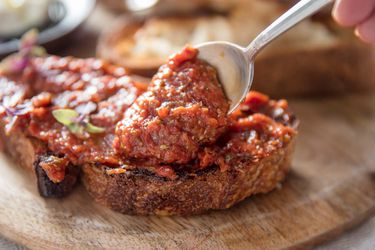 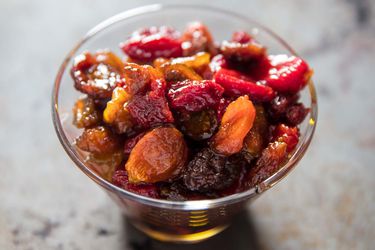 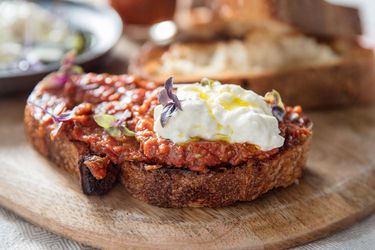 This Tomato and Caper Spread Is a Taste of Summer, Whenever You Like 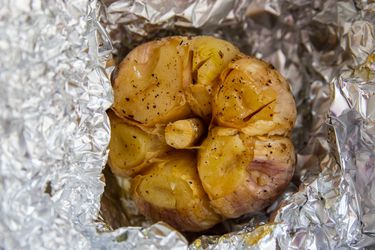 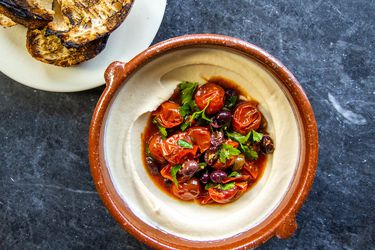 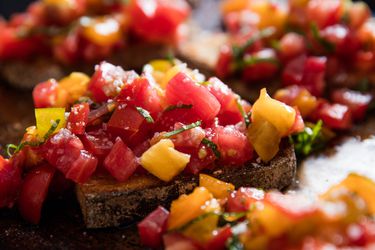