A hearty sweet and savory salad for wintry weather.

Why do salads get such a bad rap on Thanksgiving? I know that on Turkey Day, most of us are in it for the carbs, and there's a lot to be said about stuffing yourself silly with stuffing or getting mashed on potatoes, and there's nothing wrong with that, but here's my theory as to why salad is so often shunned.

In this case, since we're going all out, we'll add every one of these. Pea-sized chunks of sharp blue cabrales cheese from Spain is one of my favorite blue cheeses and excellent in salads (you can, of course, use any sharp cheese of your choice), and we've already got crunchy hazelnuts in our vinaigrette.

For fruits, I like to roast sliced pears in a bit of butter and sugar in a skillet until they get nice and caramelized on the surface but retain a slight crunch in the middle. The dark sugar adds some nice bitterness to the pears, which should be slightly underripe before you sauté them (fully ripe pears fall apart). If you are an apple eater, those would work well, and if you're lucky enough to find some quince, those would work even better.

Finally, it's pomegranate season, and there's almost never a reason to not use pomegranates, so we'll use them.

Sharp, spicy arugula greens are my third green of choice. Of course, you don't have to stick to these options. Radicchio, for example, would make a fine substitution for frisée, as would most other tender bitter greens. Mizuna or young mustard greens would make for an interesting variation to arugula. Just remember: You want a mix of bitter and hot, crisp and tender.

For the Hazelnut Vinaigrette:

Vinaigrette can be made up to a week in advance. Pears can be roasted up to two days in advance. Store both in a sealed container in the refrigerator. 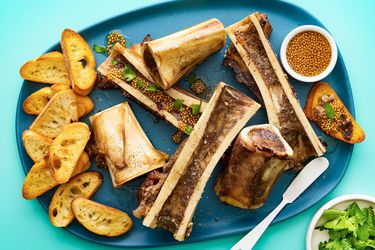