Among my family in Bangladesh, I've become known for my weakness for begun-er tok, a Bengali spiced-eggplant dish that’s tart, salty, hot, and sweet all at once. In it, thick slices of eggplant are fried until tender before being gently simmered in a spiced sauce. It's an involved and long-cooked affair, yet I still can’t visit without being met by a platter in every home.

Each aunt makes the dish her own way; some versions are extra saucy, with eggplant floating in a bright vinegar-spiked tomato sauce, while others highlight the nightshade’s delicate side, in a gently spiced, sticky-sweet curry. My mother’s version, with just enough tart tamarind paste and fiery chili to light up your tongue, will always be my favorite.

And now, here’s my take on it, inspired by Mom’s and all the other renditions that have welcomed me over the years, but with a modern twist—I’ve made it fast and easy. When I want to give myself a taste of those memories on demand, I make this simplified oven-baked version. It gives me 90% of the satisfaction of those slow-cooked, multi-step curries, but with only about 10% of the effort. On a busy weeknight, that’s solid math to me.

I opt for tomato paste in place of ripe fresh tomatoes, since it's already cooked down and concentrated, so there’s less simmering for me to do. I also skip the tamarind, my mother's key ingredient, and replace it with white vinegar—a pantry staple I’m never without. And because it’s baked in the oven, this dish is hands-off and comes with none of the splatter and mess of simmering on the stovetop.

I was lucky enough to find adorable baby eggplants at the market and quickly scooped them up, but slender Japanese eggplants, cut into thick slices on the bias, are also a good choice for this dish. I split each baby eggplant in half before scoring the cut sides with the tip of a sharp chef's knife or paring knife. Scoring the eggplant helps the spice paste flavor the vegetable to its core in a shorter amount of time. Just be sure to keep the cuts shallow, particularly if you're using Japanese eggplants, so they don’t fall apart after cooking.

I then toss the eggplant with kosher salt and set it aside in a colander to drain for about an hour. This draws excess moisture out of the vegetable, so the eggplant cooks up hearty and dense. Because it’s tough to gauge how much salt remains after the liquid drains off, I always rinse and pat the salted eggplant dry with a clean kitchen towel.

For the paste, I melt ghee in a small skillet and add mustard and cumin seeds, along with turmeric and Kashmiri red chili powder. (If you’d prefer to keep the dish vegan, refined or virgin coconut oil can substitute for the ghee.) I fry the spices until the seeds just begin to pop and become aromatic.

I then stir in tomato paste, vinegar, brown sugar, and water, mixing them all well. I simmer down the paste until it's thick and brick-red and the ghee has broken out of it, pooling on the surface.

For a touch of added flair, I finish the dish off with a final drizzle of zesty mustard oil and some herbs for freshness. Due to concerns over its erucic acid content, it's technically illegal to use mustard oil in the US for anything other than external applications (e.g., as a massage oil), but it's a staple ingredient in South Asian cooking and is consumed in small quantities by millions of people. If you don't want to use mustard oil in this dish, though, you can achieve a similar effect by whisking a half teaspoon of Colman’s dry mustard powder into one tablespoon of any neutral oil.

This eggplant dish may not be the same lovingly slow-cooked one I grew up with, but it’s a quick cure I can bust out any time the homesickness strikes. 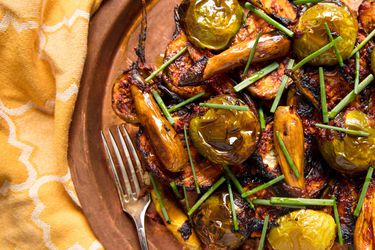 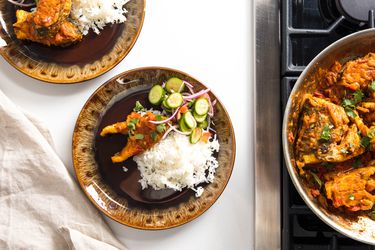 Bhuna Is the Curry Sauce Your Weeknight Meals Are Missing 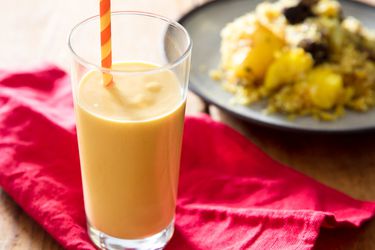 How to Make Sweet or Savory Lassi, the Original Milkshake