Want to make a wine snob shudder? Drop some ice cubes into your glass. Or, worse, add some fruit. More than a few Italian and Spanish friends of mine, though, do it without hesitation, and boy do they enjoy it. Wine is as everyday to them as salt—it's ever-present, and not in need of coddling quite as much as some purists would insist. But even wine purists, in my experience, won't object to a frosty pitcher of sangria once it's plunked down in front of them, a nice bit of cognitive dissonance to make way for the undeniably delicious combination of chilled wine, sugar, and fruit.

Tinkering with wine, doctoring it, and, back when wine tasted more like vinegar than anything we'd consider wine today, covering up its many flaws dates back at least to Roman times. Honey, fruit, spices, and more were routinely added to the vino to make it more palatable, and while winemaking standards have improved so much today that even the cheap stuff isn't in need of flamboyant interventions, it's still fun to do.

Many sources describe sangria as a drink that's more popular among tourists in Spain and Portugal than the locals, and that may be more or less true in recent times, but it also rings of some remnant wine snobbery and ignores Europe's very long history of wine-modifications. According to Spanish cooking expert Penelope Casas in her 1982 bookThe Foods and Wines of Spain, sangria had been quite popular among Iberians until cheap bottled products tarnished its reputation.

Meanwhile, the 1964 World's Fair is credited with boosting sangria's popularity in the United States, though in this case too, the history has deeper roots. Before sangria was popular in the US, there was sangaree, a drink of fortified wine like madeira or port mixed with water, nutmeg, and sometimes citrus juice. With a twisting origin story that flows through 18th-century London, the West Indies, colonial America, and Spain, sangaree may have been sangria's predecessor, though it can just as easily be argued the other way around given the ancient European history of adulterating wine for everyone's benefit. At the very least, the names seem connected: sangaree comes from sangre, the Spanish word for blood, same as sangria.

What Goes Into Sangria?

There aren't too many strict rules about how to make sangria. The basic elements are wine (usually, but not always, red), fruits (most often orange, lemon, and apple), sugar, ice (or some other method of chilling it), and booze (brandy, rum, etc.). Some folks add fizzy lemonade, or just a fizzy water like club soda, change up the fruits, or get creative with spices, extracts, liqueurs, herbs, and more. There's no limit on the possibilities as long as the drink is balanced, pleasant, and refreshing.

As we'll see, though, it's not impossible to screw that up.

Tossing the (Fruit) Salad: Which Fruit Are Best in Sangria and Which to Avoid?

Heading into my testing for this recipe, I had a working hypothesis, which was that we should think of sangria much like Stella has previously argued we should think about fruit salad: flexibly and seasonally. While oranges and lemons may hang in tree boughs nearly year-round in southern Spain, they tend to be at their best in the winter in the States. Similarly, while apples store well for many months, American crops are at their peak in the fall and winter, trailing off in quality by spring and summer. So why cling religiously to apples and oranges in this climate just because that's what works on the Iberian Peninsula? It's apples and oranges, as they say.

I rushed off to my local produce store and grabbed every fruit in sight: apples, pears, pineapple, mango, watermelon, strawberries, kiwis, bananas, peaches, grapes, cantaloupe, honeydew, raspberries, blackberries, and more. I whipped up multiple batches with this cornucopia of fruit, then let them soak for a few hours in the fridge before sampling the results.

They ended up going down the drain. It turns out that the fruit in sangria works nothing like the fruit in a fruit salad. Some were good. The apples, the citrus, the grapes, and the peaches were all lovely in their wine-soaked states. But the berries and melons were slippery and soggy, the mango and pineapple were bizarre in red wine, and just about every specimen with unremovable seeds (think: strawberries, kiwis, raspberries, and blackberries) was painfully bitter. Apparently, bitter compounds in those fruits' seeds are soluble in alcohol, making them absolutely terrible choices for sangria, unless you save them to add to each glass right before serving.

Getting creative with the fruit in sangria is possible, but it's not without risks. By the time my testing was done, I'd retreated to the safe harbor of tradition for this red-wine–based recipe—apples, oranges, and lemons. There's a reason they're so popular, and it's because they work.

I spent a fair amount of time thinking about it and decided if the fruit is cut too small, like 1/4-inch dice, it's less pleasant because little bits of fruit are trying to get into your mouth each sip whether you want them to or not. Too large, say, more than an inch, and you have less surface area for infusing the fruit flavor into the wine and vice versa; plus, it becomes awkward to eat. I landed in the 3/4-inch range for the apple and 1-inch for the citrus. You want to be able to pick the orange chunks up by the rind with your fingers and bite off the flesh.

There are fewer rules for picking a wine for sangria. Tradition would point you towards something like a Spanish Rioja, but just about any red that's similarly light- to medium-bodied can work. White wines make fantastic white sangria, rosé works well for a blushing version. Really the only things to avoid are higher-end wines, which will be a waste of money as they lose their nuances in the sangria pitcher, and big, tannic reds, which can produce an overly acerbic drink.

Getting Ratioed: What Are the Best Ratios for Sangria?

Sangria is easily mixed to taste and will vary depending on the wine and fruit used and the tastes of the person making it. You could just dump the wine into a pitcher and add some fruit and citrus juices, then let it sit for a while. When you're ready to serve it, stir in simple syrup and booze until everything tastes good, hit it with some club soda if you want, make any final adjustments, and serve.

Still, it helps to have some guidelines to get you into the approximate ballpark. I mixed several batches of sangria at various ratios based on a survey of sangria recipes I'd found in books and online. My own recipe lands strong on the booze end, with a full cup of brandy or rum per 750ml bottle of wine, one 12-ounce can of club soda, and about a quarter cup of simple syrup.

For the citrus juices, I started my testing with three tablespoons of a 50/50 mix of freshly squeezed orange and lemon juice per 750ml of wine, but by the end I'd shifted the mixture to be more orange-heavy and increased the overall amount to more than a quarter cup.

All of this, though, can be dialed in to suit your tastes and to adjust for variations in the wine and fruit used.

In our tastings, we preferred the full 1 cup of brandy or rum per 750ml bottle of wine, but if you're unsure, you can start with the lesser 1/2-cup amount, and then mix in more to taste at the end if desired.

To make simple syrup, stir or shake 1/2 cup cold water with 1/2 cup granulated sugar until sugar is fully dissolved. Keep refrigerated until ready to use.

The wine, brandy, and fruit can be left to macerate for up to 8 hours before finishing and serving, though the fruit can over-soften and the sangria can develop bitter flavors if left too long. We found a 4-hour maceration time to strike a good balance between achieving a good infusion of flavor and maintaining bright and fresh flavors and textures. 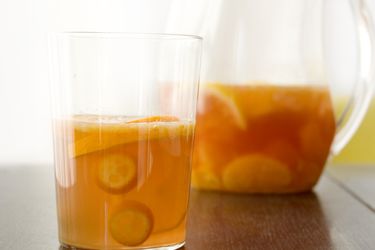