A blend of chiles and spices provide this classic Texas chili con carne with maximum depth of flavor.

J. Kenji López-Alt
Culinary Consultant
Kenji is the former culinary director for Serious Eats and a current culinary consultant for the site. He is also a New York Times food columnist and the author of The Food Lab: Better Home Cooking Through Science.
Learn about Serious Eats' Editorial Process
(15)
0
In This Recipe

The last time I tackled chili it was a contentious post! It's always a gamble to call something "the best ever," but to use that expression to describe chili—perhaps the single most contentious, zealotry-inducing, divisive food in the country—is just asking for trouble.

For the record, my recipe ended up including tomatoes, star anise, chocolate, coffee, anchovies, soy sauce, marmite, and yes, even beans (the horror!).

Well, Texans, today I aim to make it up to you. The recipe we're discussing now is real-deal chili con carne, old-school Texas-style. What does that mean? First of all, absolutely no beans. No tomatoes. Indeed, there's very little that goes into the pot other than beef and chiles (and plenty of both!). That doesn't mean there aren't a few things to discuss, however. Let's get to it.

The original chili was made with dried beef pounded together with suet and dried chiles into a sort of pemmican-like dry mix intended to last a long time and be quick and nutritious for cowboys to rehydrate and stew up out on the range. These days, we've got refrigerators and fresh meat. So we use them.

What we're looking for here is a meat that's good for stewing—that is, rich in connective tissue and fat and high in flavor. In general, beef falls across a spectrum of tenderness with relatively bland cuts on one end and very flavorful but tough cuts on the other. These cuts generally correspond with muscles that the steers use least to most during their life.

So on the far left side would be relatively unworked muscles like tenderloin or loin cuts (strip steak, porterhouse, etc.). Very tender, but relatively flavorless. On the other end of the spectrum are hard-working muscles like, say short ribs, shin, oxtail, or chuck (shoulder).

Chuck is essentially the ideal stew cut with great flavor, a good amount of fat, and plenty of connective tissue all in one well-balanced package.

As the meat slowly cooks down in flavorful liquid, all of that connective tissue—mostly composed of the protein collagen—breaks down into rich gelatin, which is what gives good stewed beef its luxurious texture.

Cutting and Searing the Beef

The chili of my youth was made of ground beef, which is key if you don't want to spend the time to properly stew your meat. Grinding beef shortens its fibers, making it far more tender. A ground beef chili can be ready to eat in under an hour. But that's not what we're after. Real Texas chili is made with big chunks of meat and requires plenty of slow stewing.

I played around with a few different sizes and settled on large two-inch chunks (they shrink to about an inch and a half after cooking). I like having to shred a large cube of beef apart with my spoon before eating it, if only to constantly remind myself how perfectly tender the meat has become.

As for searing, there's always a trade-off. Searing helps develop nice browned flavors via the Maillard reaction, but it also results in tougher, dryer meat. See, at the high temperatures required for browning, meat muscle fibers contract to greatly and expel so much liquid that even after a long simmer in the pot, the edges of the meat cubes are relatively dry. I vastly prefer the softer texture of unseared meat.

The solution? Just sear half of the cubes and on one side only. You develop plenty of browned flavor, but retain good texture in the rest of the meat. Worried that the flavor will only be concentrated on the meat that you sear? Don't sweat it. Most of those flavorful compounds are water soluble, meaning that there's plenty of time for them to dissolve and distribute themselves all around the stew as it cooks.

Next up, the chilies. Arguably the most important ingredient in the pot. After all, we're making chili con carne (chili with meat), not carne con chili.

Tip number one: Stay away from powdered chiles. I mean it, I really do. Chile powders are gritty, not very well balanced in flavor, and can quickly lose their flavors as they sit on the supermarket shelf. Much better is to use whole dried chiles. They come in a dizzying variety, but most fall into one of four categories in terms of flavor. Let me recap from my previous chile article:

The key to great deep chili flavor is to use a good mix of chiles, trying to grab at least one from each category. To be honest, I don't follow a strict protocol when mixing chiles—my choice varies from batch to batch—but this time I went with a combination of fiery arbols and cascabels, sweet costeños, some chilpotles canned in adobo sauce, a couple of ñoras, and some fruity negros and pasillas. A little overboard? Perhaps. But nothings too good for my chili.

Remember: dried chiles do have a shelf life. Just like dried herbs and spices, they can lose their potency over time. I store my chiles in vacuum-sealed bags in the refrigerator (though regular zipper-lock bags will do just fine).

You can grind all of your peppers together into a custom-blended chili powder, but even the best grinder will leave you with chile pieces that can turn your liquid gritty. I prefer to simmer my dried chilies in chicken stock* before blending them all together with a hand mixer.

*If you have homemade beef stock, you can use that. Don't use canned beef stock—it never tastes as natural or meaty as canned chicken stock.

And... that's about it. Beef, chiles, and time are all it takes. I occasionally add an onion and perhaps a few cloves of garlic that I sauté in the pan after braising the beef. If I'm feeling especially feisty, I may also add a few spices from the rack. Cumin, cinnamon, allspice, a bit of dried oregano, all are good in small quantities, but totally optional.

How to Stew the Meat

The only question left is how to stew the meat. Ideally you want to cook the meat at as low a temperature as possible (to avoid causing undue muscle fiber contraction), while still softening its connective tissues. The easiest way to to this at home is to use a very large, heavy pot with plenty of surface area for evaporation (this helps limit the stew's maximum temperature), and to either use as low a flame as possible on the stovetop, or better yet, put the pot directly into a low-temperature (200°F is good) oven, which will heat more gently and evenly than a burner.

Leaving the lid slightly cracked reduces vapor pressure on the surface of the stew, which can also limit its upper temperature limit. With a heavy lid, stew temperatures can push up to 212°F. Leave that same lid slightly cracked, and your stew will stay closer to 190° or 180°F—much better. Even slow cooked meat can be overcooked so you want to carefully monitor your stew and pull it off the heat just when the meat becomes tender. This usually takes about 2 1/2 to 3 hours.

You can leave the chili as is, but I like to thicken mine with a bit of corn masa.

Like all good marriages, the marriage between beef and chili gets better and more intimate with time. Let the chili sit overnight in the fridge and it'll taste even better the next day. I promise, it's worth the wait. Meaty? Check. Hot, rich, complex chile flavor? Check. And that's really all Texas chili needs.

A sprinkle of cilantro, sliced scallions, and perhaps some cheese (I used Cotija—jack, Colby, or cheddar will all work fine) make for good accompaniments. As do warm tortillas. As does some good beer or whiskey. And fine, if you'd like, you can go ahead and add a can of beans. Just don't tell anyone I told you to.

This makes for a moderately hot to hot chili. You can vary the heat by adding or removing the hot chiles and the canned chipotles. 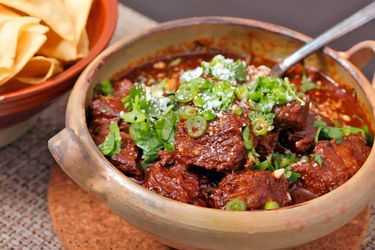