"Dude, Where's My Country?" is the title of an episode of stand-up comedian Ramy Youssef's eponymous, Golden Globe-winning comedy-drama series. The title might as well be "Dude, Where's My Food?" as Ramy explores his spiritual and culinary identity as an Egyptian American, a millennial male, and a Muslim in New Jersey. In spite of Ramy's best intentions, temptation keeps kicking his principles to the curb.

Food is involved in every aspect of Ramy's life. His search for the perfect woman begins chastely with a chaperoned dinner at an Egyptian restaurant, then devolves into a series of howlingly funny bad hookups. But what really seduces Ramy is American food. He loves Cheerios. He puts ketchup on everything. Uncrustables are an aphrodisiac.

In fact, food is important to everyone in this series. Ramy's younger sister Dena objects to the high sugar content in the large tumblers of orange juice that are always on the table in their alcohol-free home. At one point, Ramy's father draws an analogy between opening a bottle of Coca-Cola and losing one's virginity.

At home, Ramy's mother still cooks family-size portions of traditional food, including huge pots of ful medames, even though her adult son and daughter often eat elsewhere now. Devastated, because cooking is part of her identity, she becomes a social media convert and hits on what she thinks is a unique way to share her food with a new audience. But with the food come her old-world values, and they're not always welcome.

Throughout the show, Ramy hangs out with his friends at a mostly Muslim diner, where he chows down on burgers and fries, sometimes with his sharp-tongued friend Stevie (comedian Steve Way). The diner is also where Ramy goes for Ramadan, the month when Muslims must fast from sunup to sundown. They break the fast with diner food, and all the diner patrons rush into the parking lot to pray.

Soon after, Ramy has an epiphany and decides to go to Egypt to reconnect with his roots, especially his grandfather, a strawberry farmer in a small village. Ramy looks forward to having home-cooked food—the same food his mother has been making that he has been ignoring. But when his aunt serves a local specialty, it puts Ramy off. His slang-slinging Americanized cousin tells him to just “Anthony Bourdain” it. To the dismay of his family, Ramy attacks the food with a knife and fork—a faux pas, because everyone knows you're supposed to use your hands.

Still, as Ramy's uncle says, “There's nothing like a home-cooked meal.”

As a viewing companion, make a meal Ramy might eat to break the fast during Ramadan—which, this year, starts on April 23—including pita, dukkah, and ful. 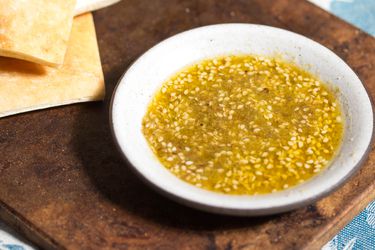 Do You Dukkah? All About the Middle East's Addictive Blend of Nuts, Seeds, and Spices