I'm a great lover of Thai-style curries like Phat Phrik Khing and Khao Soi, and through the years we've found that the best way to get flavor out of your aromatics is by pounding them with a mortar and pestle. This is true whether you're making a curry paste, a pesto, or even the flavor base for guacamole or salsas.

The mortar and pestle is one of the most-used pieces of gear in my kitchen.

A lot of folks ask me if they can skip the mortar and pestle by using the electrical power of a food processor. Well, you can, but you lose flavor. Why?

A food processor shears and shreds the ingredients, tearing apart and breaking down vegetables, but not necessarily rupturing all of their cells to release aromatic compounds. A mortar and pestle, on the other hand, does a great job of actually crushing individual cells, producing a curry paste with much better flavor. On the other hand, it's much easier to get a smooth texture with a food processor. I wondered if perhaps combining the two might give me the best of both worlds: good flavor with smooth texture and minimal effort.

I tried making the same batch of curry paste by four different methods:

I timed how long each method took, then tasted the final results. As far as ease of production goes, the food processor wins by a long shot. It can reduce a pile of fresh and dried aromatics to a smooth curry paste in just a couple of minutes, requiring only a few scrapes with a rubber spatula during the process. By contrast, making a curry paste 100% with a mortar and pestle, as I've advised in the past, is a much more laborious process that typically takes at least 5 to 10 minutes, but can take much longer with a smaller mortar and pestle or a paste-pounder who isn't 100% invested in the process.

For the combined methods, I employed a one-minute pounding session along with two minutes inside the food processor.

But the version I started with the mortar and pestle and finished in the food processor? That was the one! The flavor was almost-but-not-quite as good as using a mortar and pestle alone (I got plenty of cell breakdown during the pounding phase), but the advantage in time and effort was tremendous.

In the future, I'll be sticking to using 100% mortar and pestle when I have the time and energy (or an extra set of kitchen hands to pass the task off to), but on busy nights I'll be pulling out both tools to make curry pastes with almost all the flavor at a fraction of the effort. 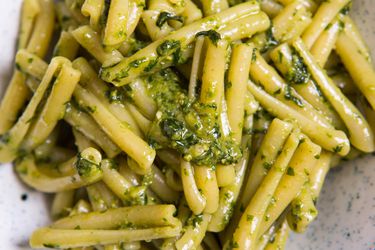 Making Pesto or Curry Paste? The Freezer Is Your Friend | The Food Lab