This pumpkin cornbread is guaranteed to get you out of your Thanksgiving food rut.

Some days, I feel like Thanksgiving is already over. I've been reading Thanksgiving preparation tips and recipes for months. All around me, I see the holiday lights go up and the Christmas ads play on T.V. I often have to stop and remind myself that I haven't actually eaten the turkey yet.

If, like me, you're in need of a bit of the Thanksgiving spirit, I offer a two-pronged remedy. First, find A Charlie Brown Thanksgiving on Netflix and watch it. Second, find a cast iron skillet and make some cornbread. There's something about mixing up this easy bread and baking it in a heavy, seasoned iron pan that feels very Americana and pioneer and Laura Ingalls Wilder all rolled into one. Crack open a hard apple cider while you're baking and you'll be in the spirit in no time.

Maybe your problem is another that I've had before—you're stuck in a Thanksgiving food rut. You've considered deviating from the tried and true menu, but you know someone will complain when their favorite dish is missing, or you'll get excommunicated from the family if the new dessert you tried comes out badly. I say, change things up with the bread. It's probably not anyone's favorite dish and this version, spiced up with pumpkin, is extremely easy to make.

It turns out that pumpkin plays very nicely with cornbread. It adds moisture—so this isn't for you if you like your cornbread crumbly and dry—without making it cakey. The texture is still grainy, just a little more plump and dense. The pumpkin also imparts some squashy sweetness. Though take note the sugar is still restrained, so this isn't dessert-level sweet and could easily be paired with the main course. Of course, sneaking a slice and toasting it, then adding a little jam, would make it the perfect light Thanksgiving-morning breakfast. 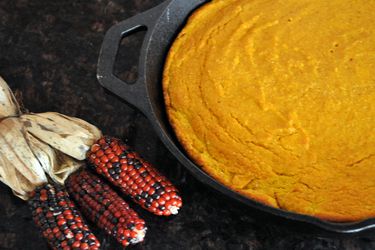