When I first got my pressure cooker, I thought of it as a piece of highly specialized equipment that I'd need only in very specific situations, like if I wanted tough cuts like lamb shanks tender in under an hour. In my imagination, it was like the Navy SEALs of cooking gear, a tactical armored unit that sits around smoking cigars, lifting weights, and getting tattoos until something really serious goes down. (It probably has some kind of tagline that it delivers right before forcing ingredients into submission, like, "Can you handle the pressure?")

Until recently, I hadn't really considered it for a relatively quick-cooking meat like chicken. But after making this Thai-style stew, I've realized that a pressure cooker can work magic on chicken dishes.

The great thing about this dish is you can do as much or as little work as you want. For speed and convenience, I use store-bought Thai green curry paste. The paste would be fine on its own, but to freshen it up and add a little more complexity, I supplement it with some fresh garlic, ginger, Thai chilies, and spices like cumin and coriander. I fry them all in a little oil to coax out and deepen their flavors. In a pinch, you could skip this frying step and just dump everything into the pot at once, though you'd lose some of the rich layers of flavor.

Then I add a can of coconut milk to the cooker, along with a couple of alternating layers of diced eggplant, kabocha squash, and chicken pieces. A whole chicken cut into parts works great, but you can also opt for just the legs since the dark meat (which I like best when it's very well-done) comes out cooked-to-the-bone in no time. Miraculously, white meat simultaneously manages to stay incredibly tender and juicy—another huge pressure-cooker advantage, given that stewed chicken breast is normally horribly dry.

The single can of coconut milk may seem like too little liquid, but as Kenji has shown in this cool recipe for Colombian chicken stew, you don't always have to add a lot of liquid to the pressure cooker to get quite a bit of delicious broth out of it.

With the cooker loaded, I let it run at high pressure for a mere 20 minutes. One of the challenges of making stews in a pressure cooker is that by cooking in a closed environment that traps all the steam, the juices can sometimes end up too watery and thin. The amazing thing about this stew is that the eggplant and squash break down into the cooking liquid, forming a thick sauce that doesn't need to be reduced. Stir in a splash of fish sauce, some herbs, and fresh spinach leaves, and it's ready to eat.

So if you ever find yourself facing an intimidating looking pressure cooker and it asks, "Can you handle the pressure?" the answer is, "Yes." 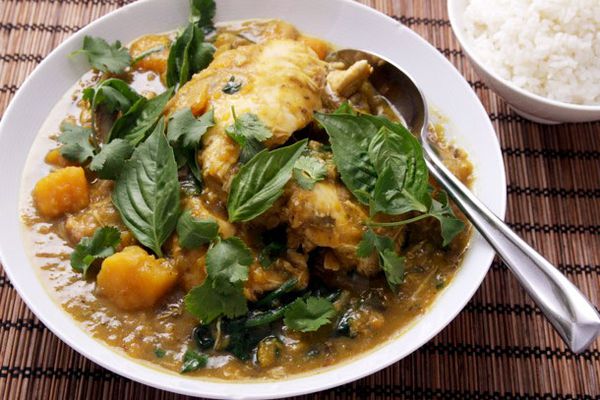