I don't fully understand the nationwide love affair with slow cookers. People say they're convenient, and to a degree I see how they are, but they still require you to have enough forethought to purchase your ingredients and prep your meal hours and hours before you actually eat. I don't have time for that. Which is why I love my pressure cooker so much more than any slow cooker*—because I can make the same kinds of slow-cooked dishes, without the whole "slow" part.

Although, in an ideal world, you'd have a combo unit, like we do in the SE test kitchen.

This black bean soup is a prime example of what I'm talking about. With a slow cooker, I'd have to whip it up the night before or first thing in the morning, then set it to simmer throughout the day, all to have dinner ready for me when I get home later. But with the pressure cooker, I can toss it all in the pot when I get home and have it ready in an hour. And frankly, it often tastes better, since I can brown things in my pressure cooker first for deeper flavor, a function a lot of slow cookers lack.

To make this easy cold-weather dish, I start by sautéing onion, celery, and garlic in a little oil until they start to brown. Then I add diced mushrooms and cook them until they've released their juices, those juices have cooked off, and the mushrooms are starting to brown. The mushrooms add tons of flavor with minimal work—a huge plus in my book. After that, I toss in some chunks of andouille, the Creole smoked pork sausage, and cook them briefly, then dump in dried black beans, chicken broth, and herbs and let the cooker run at high pressure for 40 minutes.

While the cooker is humming away, I mix some ground cumin and lime zest into sour cream for a cooling, tangy garnish. Then I drink a beer. Then I have another beer. (See how easy this is?)

When it's ready, the soup is thick with silky-smooth beans and smells faintly of smoke and garlic. A fat dollop of that sour cream, and dinner is served. I'll take this kind of fast cooking over slow cooking any day of the week. 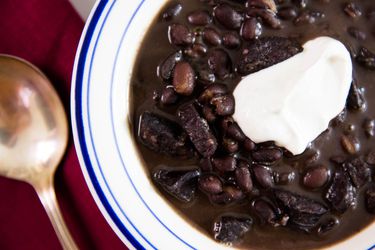 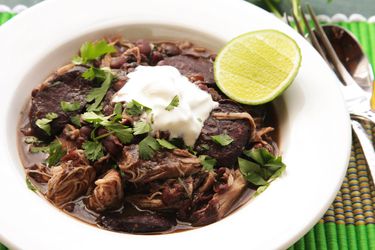 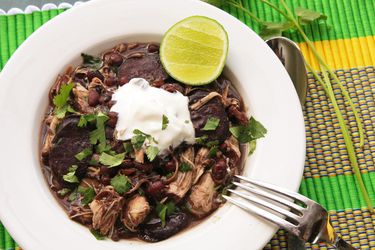 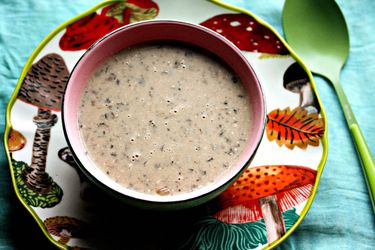