My mom has never been the greatest cook in the world, but I really liked a few of the dishes she made when I was a kid. I had no idea where her recipe for hot dog and cabbage soup came from—I figured it was a 1970s Betty Crocker cookbook's idea of what Polish food might be—but I did like it. I quizzed her about it, and she said that she had vague memories from childhood of her mother making a sauerkraut and sausage soup. (What my Japanese grandmother was doing making Central European food, in Japan, in the '50s, is a mystery to me.) This was my mom's own version made from supermarket staples, and it was really, really straightforward: Fry hot dogs and bacon; add onions, cabbage, and potatoes; then boil it all in chicken stock until acceptably soft and mushy. I asked her about the addition of bacon, to which she said, "I think I put it in because your sister likes bacon."

Makes sense to me.

The finished dish was simple but comforting, the kind of meal I could imagine Charlie Bucket eating on the best day of his life. (I mean, the best day before he inherited the chocolate factory and all.)

It's stuck in my memory enough that it seemed like a worthwhile recipe to re-create in my own kitchen, so I did exactly that, making not just one but two distinct versions of the same soup. It was a fun exercise in seeing how slightly different techniques and ingredients can produce vastly different results.

My Mother's Hot Dog Soup, Version A: The Classic

I typically do some quick internet searches any time I'm about to start cooking something new. I'm especially glad I did this time, because, as it turns out, my mom had accidentally "invented" what is more or less a Polish kapusniak, a simple soup made with pork, onions, cabbage (in the form of sauerkraut), and potatoes. Kapusniak recipes seemed like a good way to glean some insight into how I might alter my mom's dish.

I poked around various recipes online (thank god for Google Translate) and watched a whole slew of Polish grandmothers on YouTube making the dish. No surprise that, just like with almost any "traditional" dish in the world, the variations on it are many. Some use fresh pork in addition to bacon and have you cook the soup until the pork falls apart. Some call for finely grating carrots and onions on a box grater so they nearly disintegrate into the soup. Some thicken up the soup with a touch of flour added toward the end, while others rely solely on the starchy thickening power of the potatoes to give it extra heartiness. (Rachael Ray shoehorns beer, crème fraîche, and allspice into hers.)

This was all good news, because it meant that I felt absolutely no compunction about making up my own recipe, based partly on how I remember my mom's version tasting and mostly on what appealed to me personally.

For mine, I start with slab bacon (or well-rinsed salt pork) and Polish sausage, which I brown in a little oil. Next, I add sliced onions and carrots cut into small dice, allowing them to soften somewhat in the rendered pork fat from the sausage and bacon. With straight-up sauerkraut, I found the dish a bit too bracing and intense, so instead I cut mine with a mixture of fresh cabbage and sauerkraut. Once the vegetables are all softened, I add some chicken broth, a couple of bay leaves, the stems from a few sprigs of dill (I save the dill fronds to garnish the soup at the end), and a russet potato, letting the whole thing simmer together until the potato is tender.

Rather than a flour roux, I like to use a light cornstarch slurry to thicken the soup ever so slightly. A tablespoon of cornstarch for over two quarts of soup gives it some more body, without making it goopy. To incorporate the cornstarch, I make the slurry with a little bit of cold water and add some ground paprika and white pepper to the mix.

The dish takes about half an hour to make (and it's a tasty-smelling half hour). It may not be quite as simple as the traditional Nakanishi-family hot dog and cabbage recipe, nor as authentic as some other kapusniak recipes floating around, but it's easy and delicious, and destined to become a classic in at least one household I can think of.

My Mother's Hot Dog Soup, Version B: The Creamy One

The idea for making the second version of the soup creamy came to me, indirectly, from my wife, who has a serious thing for creamy soups. As it happens, potato-leek soup is one of my all-time favorites. (And, in fact, the very first recipe of my own devising that a chef allowed me to put on a public-facing menu!) In my version of the soup, I cut the classic milk and cream base with buttermilk, which adds some acidity and brightness to a soup that I otherwise find a bit too starch-on-fat heavy. With the array of ingredients I had in front of me, I wondered: What would happen if, instead of buttermilk for acid, I used a good amount of sauerkraut?

I started by sautéing sliced kielbasa in a little vegetable oil until it was nicely browned. I then removed it from the pan and saved it to use later as a garnish, leaving that kielbasa fat in the pan to add flavor to the soup. Next, I added plenty of butter and leeks, reducing the heat to allow the leeks to gently soften without getting any color on them. (The sweetness of caramelized alliums was not what I was after in this dish.) Once they were properly softened, I added chicken stock, sliced cabbage, and bay leaves. Though I typically use russet potatoes for my potato-leek soup, I found that the creamier texture of Yukon Golds worked better here.

On my first attempt, I immediately dumped in a full pound of sauerkraut with its liquid. Bad idea. As it turns out, acid can inhibit the breakdown of pectin, the carbohydrate glue that holds plant cells together. In the tart liquid provided by the sauerkraut, my potato chunks never softened. I had to fish them out and replace them with potato chunks I had cooked separately in boiling water.

The way to do it instead is to simmer the soup until the potatoes are completely softened, then add the sauerkraut and its liquid.

Once it comes back up to a simmer, it's ready to hit the blender. Some soups can be blended directly in the pot. Not this one. Even with the winner of our hand blender testing at my service, the soup remained unappetizingly chunky. A spin in the countertop blender and a pass through a fine-mesh strainer are necessary for a silky-smooth texture.

To serve the soup, I add back some of the browned kielbasa slices and garnish the whole thing with chopped fresh dill and a few drops of really great olive oil.

Side by side, the two soups couldn't be more different, but they have a few things in common beyond their basic flavors: Both can be made in about half an hour, both are mega-comforting in their own way, both are begging to be served with some nice crusty bread, and both are excellent on the reheat.

Now to answer the next important question: Which one is gonna taste better when made with hot dogs? I'll probably have to recruit my mom for a taste test. 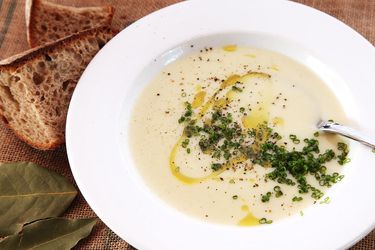 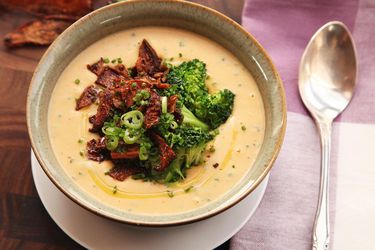 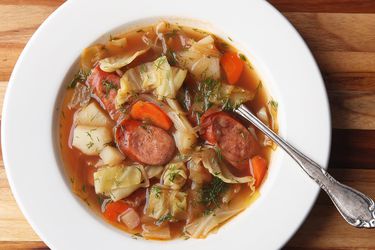 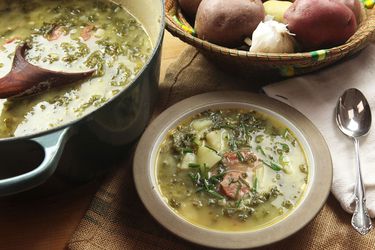