Bards and philosophers have long grappled with the question of what's in a name. Apparently recipe developers do too, as I have recently while delving into the world of potato pancakes. It doesn't take long when trying to define one kind versus another to realize that they have more in common than they do differences. As I flipped through cookbooks and online sources, I was left to wonder, am I just recreating the same recipe over and over with trivial variations, all to justify each individual recipe's existence? No recipe challenged me more in this sense than France's pommes Darphin.

On my potato pancake to-develop list, I had Darphin along with pommes Anna (easy to distinguish from the rest thanks to its shingled design) and rösti (on the surface a potato pancake like any other, but upon deeper research its uniqueness emerged: unlike the others, it must be made from cooked potatoes). All the while I was also comparing them to classics like latkes and hash browns, which both looked an awful lot like Darphin.

Few of my classic French references even mention pommes Darphin. Not Larousse, nor Escoffier, nor Fernand Point. Julia Child makes no peep. Jacques Pepín does in his complete techniques, though he uses Darphin's other name, pommes paillasson ("doormat potatoes"). I found a handful of videos on YouTube showing French chefs making them, some cutting the potatoes into fine julienne, others simply grating them on the teeth of a box grater just like latkes; some Darphins were large and thick, others small and thin and very, very latke-like.

I also turned up a 1988 Chicago Tribune article written by the late chef, cooking teacher, and founder of the Institute of Culinary Education, Peter Kump. In it he describes visiting the chef Jacques Cagna one evening in Paris, in which the chef quickly whipped up some pommes Darphin by grating "some peeled potatoes quickly, directly into the pan, salting and peppering them from time to time," before cooking them in a skillet and serving the crispy cake with duck breast.

In the end, I had to conclude there wasn't necessarily a firm definition of this particular preparation, though the tendency is towards a potato pancake that's larger, more evenly round, and thicker than latkes or hash browns. Plus, they don't typically have onions like latkes do. And while recipes seem to use both grated and julienned potato, the long, fine strands of julienne seem these days to be more standard.

With that, the rest of the recipe was easy to work out, and just as easy to make:

(Note: Be sure not to confuse pommes Darphin with the similarly named pommes Dauphine, which are puffy fried potato balls.)

Even in a well-seasoned cast iron or carbon steel skillet, potatoes have a tendency to adhere, which can lead to failure; if you use one, make sure potato shreds are blotted dry and that the skillet is very well seasoned. In our testing, though, nonstick worked beautifully and came with none of the risks.

This style of potato cake is best made shortly before serving, though it can be kept warm in a 200°F (95°C) oven for up to 30 minutes. 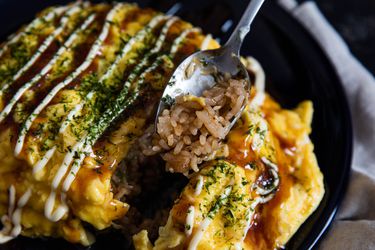