Pizzeria Paradiso. I think it is the best 'za in D.C. Far better than the kids-fest that is 2 Amys. Plus, there is some chef overlap there. Has Slice been there?

Has Slice ever been? The short answer, no. The looooong answer, with D.C. pizza blatherage, after the jump.

I, personally, haven't been to Pizzeria Paradiso yet. I was down in D.C. in early November for a quick pizza recon/fact-finding mission. I had only one day to hit some places. My intel from here in the Slice–Serious Eats office (from Erin Zimmer, who went to school and lived in D.C. after graduation) was that Paradiso was skippable if I was going to hit 2 Amys.

(Update: I just asked Erin about this again. "Yeah, but you know, last time I was in D.C. and had 2 Amys, I didn't like it as much as I once did. I think Paradiso is good and is a better value, for what you get there. 2 Amys can be expensive.")

Given what I did end up eating in D.C. and what I found out about Mia's Pizzas after eating there, I wish I did hit Paradiso. I'll get to that, as I continue to blab about the pizza I ate in D.C.

As I said, I had only one day in town, so I had to narrow down my eating. After consulting with Ed Levine and Erin, I decided on ...

(Before I go on any further, I have to admit that I have no photos from this trip. Oh, I had them, but I lost them in a hard-drive back-up/reformat malfunction. Sorry, folks. Some of them were good photos. I will never wait to upload my pics Flickr again.)

Anyway, I made my way down there on the Megabus thing (which ROCKED, btw) and then picked up a Zipcar near H Street and 5th. (Sweet deal, too. The car I actually reserved, a Honda Fit, wasn't back in the lot yet, so they upgraded me to a BMW 325i for the inconvenice. Cha-ching! Rollin' in style like I was some bigwig on Embassy Row.)

Given the hours and locations of my various picks, I rolled up to Mia's in Bethesda first for lunch. I wish I would have read up about Mia's BEFORE I visited D.C., because then I would have known that pizzaiola-owner Melissa Ballnger had been at Paradiso before opening Mia's.

If Paradiso has any of the magic Ballinger has worked at Mia's, then I am very much interested in heading back down to the District for a shot at Paradiso.

The pies I had at Mia's were flavorful, crisp, chewy, and well-balanced. I had a Margherita ($12.95) and a Salsiccia (tomato sauce, sausage, pepperoni, portobello mushrooms, oregano, "spicy sprinkles," mozzarella, and Parm; $12.95). Mia's is a wood-oven place, making smallish, personal-size pies with thin crusts.

By now, you might see a pattern. I tend to love me some sausage-spiked pies. And the Salsiccia was really good. For me, sausage on a pizza is almost like bacon on anything else. You add it to a pie, and how bad can that be? But this one was a notch above. In fact, it inspired a bit of thinking, making me wonder if there's not something I could describe as "pizza parlor pizza."

The way all those flavors worked together was a trip back to the old days for me, when I'd eat pizza with my family at places that didn't take a dainty hand with the toppings. Here, though, the flavors were spot on, but the balance of the pie itself was all in check. The crust stayed crisp enough to stand up against the stuff on top, and there wasn't an overwhelming amount of toppage that the pizza became an excuse to shovel goodies into your mouth.

I'm happy to report that the Margherita pie was also very good. It held its own against the Salsiccia even when doing alternating slice tastings (i.e., Marg first, Salsiccia next, then another Marg). The crust was flavorful, a bit salty; the mozzarella was fresh, creamy and augmented with shaving of freshly grated Parm — done there at the table by the waitress, who carried a portable cheese grater.

I had some preconceptions about Mia's, but lunch turned them around. I really, really liked this place.

Next up, 2 Amys in D.C. proper. I must have had some great luck. The place was empty. Erin Zimmer here described two-hour waits and crowded quarters, but I guess that when you visit at 3 p.m. on a Tuesday, you're fine.

2 Amys has the VPN seal of approval, which means it's made according to the ins-and-outs of the Vera Pizza Napoletana association and is certified as "Neapolitan." As you know, I'm pretty ambivalent about that whole thing. Who cares if some pizza wankers take measurements, wet their pants, and approve a pizza? It's all about how it tastes.

The 2 Amy's pizza was technically the best pizza I ate this day. Beautiful to look at, puffy end-crust (or cornicione). Great color, char, leopard-spotting, all that jazz. And if you're into Neapolitan, you'd probably be in heaven. It has the soupy, wet center that true Naples pies are said to have, it had great balance of cheese and sauce. Blah blah blah. But I just kept thinking about that Mia's Margherita. Luckily, I had leftovers sitting out in the car.

Bottom line: If you like Neapolitan style, I'm sure you'd be all over this like grease on cheese. But I left a bit uninspired.

I'm not going to spend too much time on Comet Ping Pong here. It had gotten a lot of press in D.C. when it opened. Much of it for the space it's in, but a lot of it for the pizza, too. It's wood oven, smallish/personal size pies. Thin crust. The space really is cool. Even before you step in, it's got a cool retro (it may even be vintage, IDK) sign above the door. A ping pong table is in the yard out front. You walk in and it's all tall ceilings, concrete floors, and seemingly repurposed materials used to great effect.

I wish I could be more enthusiastic about the pizza. Unfortunately, the crusts on the two pies we tried (I met up with rockstar blog dude Anil Dash) were tough and crunchy. I had read that inconsistency can be a problem at Comet but that the departure of its iconic chef, Carole Greenwood, and subsequent hiring of baker Farid Fellag had evened out this issue. But if what we tried that night was indicative of the newfound consistency, I'm not sure I'd want to run back.

I will give them the aces on toppings, though. They're doing the whole local-when-possible thing and using great, top-notch ingredients. We had the "Time Out" — "Stan's Local Merguez Sausage, melted onions, potato, garlic, gorgonzola" ($14) and a plain Margherita. There was also a "Yalie," which, yes, gives a nod to the legendary bivalve-topped pies of New Haven, Connecticut.

Mia's Pizzas: So far from what I've now sampled in D.C., I'd be heading back to Mia's without hesitation.

Comet Ping Pong: I'd still want to try Comet again, just to see if things would be any different or better. Plus, they have some interesting-looking pizzas on the menu. And oftentimes, great topping combos can offset a not-so-great crust (I'm looking at you, Roberta's).

2 Amys: I'd be really on the fence with 2 Amys. I can't fault it on any technical end. It's just not my bag. It might be great to take out-of-town guests to or for a date (though, from what Erin tells, me, you'd want to avoid a weekend night).

So, that, Nick, is the long long story of whether I've been to Paradiso. The short of it is No, but I want to!

Wait! What Happened to Pete's Apizza?

Glad you asked. I had it on my list, didn't I? Well, TRAFFIC, that's what happened. Great gumbo, Gumby! I just don't know D.C. that well and relied on Google maps, which are sometimes not the best route-suggesters. I hit more traffic than I anticipated lost enough time that I couldn't get to Pete's Apizza. So my list for next visit (now that I found out how easy it is to get to D.C. on the new superbuses), I've got the following to check out:

Any others I should hit? 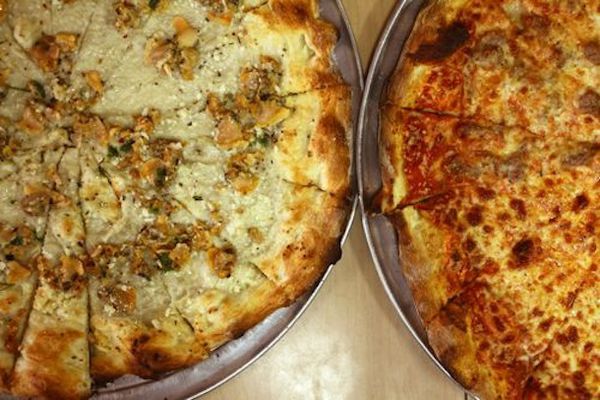 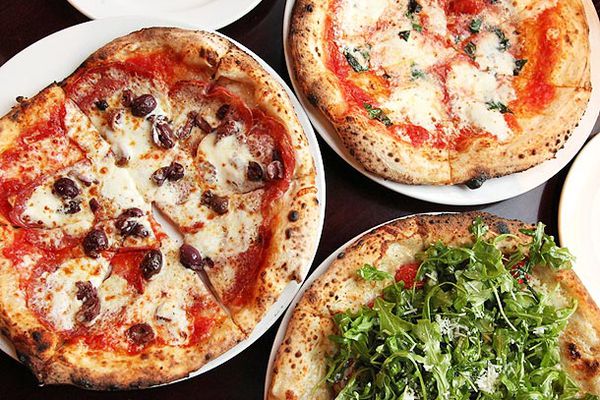 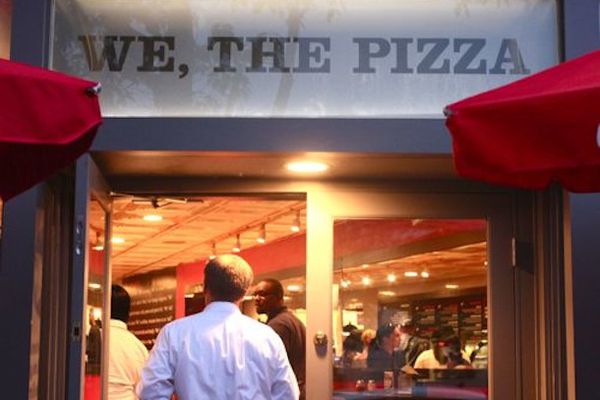 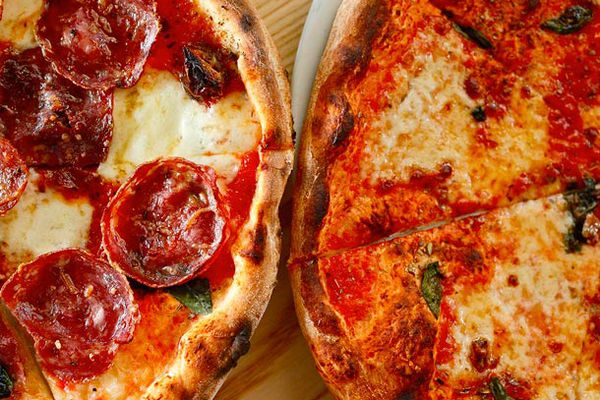