Tonycalzone is all over the comments here on Slice, so I asked him if he'd sit in the hot seat with us here. Little did I know that Tonycalzone is the nom de screen of Anthony Falco, the founding pizza-maker at Roberta's in Brooklyn. Nice. Let's go! —The Mgmt.

My great-grandmother from Sicily used to make amazing pizza, more on the sfinciuni spectrum of things, fresh veggies and herbs from her garden, no cheese, a thick smear of strattu (sicilian tomato paste). It haunts me. Italian cooking all stems from grandmas, and trying to recreate that experience.

Do you make pizza at home, too? If so, how? What recipes do you use?

I started making pizza at home with my dad, we used basic ratios from my great grandmother; recipes don't work if you can't read or write, and she cooked entirely by feel and experience. I only started dealing with recipes when I began cooking professionally. Here comes the plug....I teach a class on making pizza at home, where I give out detailed recipes and hands-on instruction. [If I would have gotten this interview up sooner, you could have taken the class, folks, but Anthony says there will be more. Watch the Brooklyn Kitchen class schedule for future events. —The Mgmt.]

So, how long have you been at Roberta's?

I started about 2 years ago a couple of weeks after they opened. I started making pizza with the owners but as Roberta's began to expand they started dedicating time to other projects like urban beekeeping, building a radio station out of old shipping containers, urban farming, meatball contest, and cold fusion power generation, I was left in charge of pizza. I carried the flag till about 8 months ago when I turned the pizza kitchen over to my protege Angelo Womack and took on my current roll of Pizza Guru.

Besides your dad and grandmother, did you or do you have any other inspiration pizza-wise?

What's the opposite of inspiration? Like when you eat some pizza and it's so bad that it makes you want to take a flamethrower to the pizza shop that sold it to you, then use some of the embers of that fire to start up your wood-fired pizza oven and make amends to the pizza gods. I get that a lot.

Why did you get into pizza and not another cuisine?

I've actually cooked quite a bit outside of the pizza realm. I used to own a Pommes Frites shop in Seattle, that was inspired by living in Amsterdam for a year, which was very inspiring. I cooked 'New American' at Vinegar Hill in their wood fired oven, which is an amazing restaurant btw. I also spent a little time working the wood fired oven at Pulino's when they first opened, cooking Italian food other than pizza, and occasionally jumping onto the pizza side. I've even made a few pizzas in Paulie Gee's amazing oven.

What was your first pizza gig?

Does making pizza bagels at Einstein's Bagels when I was 16 count?

LOL. Maybe in a "what not to do" scenario. ... What's the hardest thing about being a pizzaiolo?

Struggling with the capricious nature of dough. And flour all up in your nasal.

The reason I work in the kitchen is so I don't have to deal with customers.

What's the most gratifying thing about your job?

Cooking for other people is a great thing, the more you put into it the more you end up getting back. Not in actual monetary terms, but on an emotional level it's very rewarding.

I really like a pizza I created for Roberta's called the SpeckenWolf. No sauce, speck, fresh mozz, oregano, mushrooms, and onion. A close second is a Margherita pizza with mushrooms and prosciutto cotto, great during fall and winter.

Roberta's, or Tony's on Graham Ave for a slice of sicilian.

There should be a balance. The sauce and the cheese need to be sourced properly, fresh mozz is usually preferable, made in house even better. Great tomatoes should simply be seasoned properly, the crust is the only thing that requires any amount of technique to produce great results consistently so I guess that's the most important.

Keep it simple. Use fresh product, local whenever possible, and try not to overthink it; it's just pizza after all.

As far as I am concerned there are no rules. Some Italian guy in the 16th century decided to get crazy and put tomatoes, something no one had ever seen before in Europe, on a pizza, I applaud people who innovate. Again, don't take pizza too seriously. I vaguely remember topping a pizza during Easter with Peeps and putting it in a wood-fired oven, I don't think that ever needs to happen again.

I love to travel, and I've been all around the world, I've eaten pizza from Dubai to Indonesia. It's a global food and I love to see different cultures take on it. I usually plan a trip for whatever reason then research what kind of pizza situation I'm going to be getting into. I like to eat local cuisine as much as possible when I travel but I always manage to fit in a slice no matter where I go.

This is where I get lazy. If you, Anthony, have anything else you'd like to include, feel free to make up a question to ask yourself.

The only thing that I'd like to add is that everyone who has submitted their homemade pizza photos are awesome. There are some truly amazing looking pies being made at home, it makes me really happy.

The My Pie Monday stuff really makes me happy, too. As did this interview. Thanks so much for being a good sport, Anthony. And I'm gonna have to get in on one of your classes and maybe hit you up for a "Top This" column. Hasta la pizza! 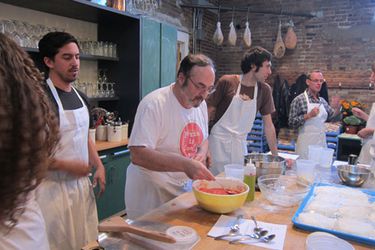