Some of you have asked for this Q&A in the comments of older Pizza Obsessives interviews. I've always begged off in the past with some excuse or other. But, guess what? One of my other interviews fell through for this week, and I needed someone quick to fill the slot, so here you go! Is it weird to sit yourself in the hot seat? I guess we're going to find out. —AK

I both anticipate and dread this question. "Why pizza?" If you have to ask, I don't know if you love pizza. I mean, really love pizza. Fortunately, on Slice, I don't think anyone visiting these pages regularly would even think to ask "Why pizza?" Which is why Slice'rs rule.

Oh, that's a tough one. Can I get away with saying I like them all? Probably not, especially among folks who have been reading this site for a while now. If I had to choose a desert-island pie or a last-meal pizza, I'd go with Midwestern-style thin crust, with a good-quality, freshly made, chunky fennel sausage topping. Shocker, probably, given that I live in NYC, but I was raised on Midwestern-style "pizza parlor" pizza, which brings me to the next question ...

I actually don't remember my first slice. The earliest pizza I can remember is the stuff my dad and I would make at home back when I was 7 or 8 (see photo above). It was itself an approximation of the Midwestern-style pizza, since my dad, at the time, was obsessed with re-creating the pizza he enjoyed in Milwaukee. (We lived outside of Boston at the time, and you couldn't get this style there.) I'm going to trot out Maria's Pizza again (I know many of you have seen/read about it already), since that's the pizza my dad was aiming for and what we tried to reproduce at home. Maria's is still there, thank goodness, and it holds up, though I know it's not everyone's cup of tea.

Sausage and thinly sliced red onion. When I make this one at home, it's what I call "The Famous Original A."

I guess, to get back to the previous question about evolving taste, I used to be a real NYC-style, plain-slice purist. This was in the early days of Slice. Maybe I thought I had something to prove being a transplant to NYC and writing about one of the city's most iconic foods. I was trying to be more New York than thou. But over time, I've come to love unusual and thoughtful topping combos across a range of styles — like the brussels sprout–pancetta pizza at Motorino, the Anise & Anephew pie at Paulie Gee, or the grandma pie with pickled vegetable at Best Pizza (to name only a few).

Though, at the end of the day, all those places (and all of the other top-notch places in my book) can get away with these combos because they have the fundamentals down, and I would be happy eating the plain pizzas there, too.

On another separate yet related note, I'd like to say that I'm also really inspired and awed by the pizzas everyone comes up with each week on My Pie Monday. I think that feature really reflects the vibrancy and creativity of the DIY pizza-at-home community. There are some wild topping combos going on there each week that I want to try — and some really serious-looking traditional pies, too. It's like the best of both worlds, and it shows that great pizza is possible at home.

See, folks, this is why I've hesitated doing one of these interviews for so long. Many of you already know where I go! I suppose I'll interpret this as in the immediate vicinity of my apartment, in Astoria. Out of sheer laziness when coming up with reviews and Daily Slices, I've already covered most of these places: Rosario's Deli, Rose & Joe's Italian Bakery, Forno Italia, and Michael Angelo's II.

Is the pope Catholic? (Wait, don't answer that.) Yes, of course.

I use Kenji's NYC-style pizza sauce recipe for the sauce and a hybrid of Kenji's NYC-style dough and the Cook's Illustrated/Andrew Janjigian thin-crust dough — basically the Kenji dough recipe but with the autolyse and bulk rise of the CI/Janjigian recipe.

For toppings, lately I've really liked the Anise & Anephew clone, which I renamed the "Funiculi, Foeniculum." I need to get some asparagus soon and do the Co. Company Bird's Nest pie, too.

For the sausage on my Famous Original A, I'm lovin' the hell out of the Pizza a Casa fennel sausage recipe. Seriously, any pizzeria that wants to KILL IT with its sausage topping should ape this recipe. It's A LOCK ON AWESOME-NOSITY.

It's shameful, I know, but I haven't yet tried the Pizza Lab Sicilian recipe yet. I think it might be a good summer pizza, since it doesn't really require preheating a pizza stone and the intense heat that goes with it.

Girl Slice has renewed my appreciation for pineapple, so not that. I like green bell peppers on occasion, so not that. What else do people HATE? Canned mushrooms? I'm not that anti on those, either.

I guess I'd have to say any seafood other than clams or anchovies. If you've ever eaten, seen, or read about the list of pizzas entered into an international pizza competition, there are some pretty outrageous ones that probably shouldn't have seen the light of day.

Probably the one just above, from a 2007 international pizza-making competition I judged in at the New York Pizza Show. Here's what I said about it on Flickr:

I don't remember which country this one was from. It was loaded with many many toppings, all of which were top notch and incredibly flavorful and fresh-tasting. There were simply too many, however -- and too many "wet" toppings that sogged down the crust. As you'll see, I couldn't even get an upskirt because not even with all the years of practice in pizza-upskirting could I get this piece to stand up and shoot from underneath. The pizzaiolo made little garlic-knot dealy-bobs. I don't think any of the judges tried them. The crust was stuffed with gorgonzola.

Well, during that whole pizza bracket thing Ed Levine and I wrote for the March 2010 Every Day with Rachael Ray issue, I'd say 3,000-plus miles. That wasn't really on my dime, though, so I don't know if I can count it.

Other than that trip, then, the farthest I've probably gone, on my own, specifically for pizza, was probably Manchester, Connecticut, to try Mulberry Street Pizza.

OMG. There's not enough space here for my ranting. I guess the biggest thing I'd like to say is that, PEOPLE, IT'S JUST PIZZA. That's not to say it's not important, but I just don't get all the purist stuff, all the stridency, all the my-(pie)-way-or-the-highway attitude. I guess that's the same with anything that attracts a fervent following — say, beer, or wine. But, man, it's supposed to be fun, delicious, etc. Thankfully, Slice has enjoyed a long period of relative calm in the comments sections (knock on wood), but whenever discussion devolves into sniping, I'm just like, WTF, Slice'rs?!? This is pizza, fercryinoutloud!

Also, people, please stop using the term cornicione in reference to anything that is not Neapolitan pizza. A New York–style slice DOES NOT HAVE A CORNICIONE. That shit's just the crust, FFS!

I guess this would be for a Q&A series I've only ever threatened to start but never have, but I'd like to interview a series of actual pro pizza-makers: Chris Bianco (Pizzeria Bianco), Sharon Ardiana (Gialina, Ragazza), Dom DeMarco (Di Fara), Charlie Hallowell (Pizzaiolo, Boot & Shoe Service), Tomoco Inoue (Pizzeria Prima Strada), Paulie Gee ... crap ... too many to name, but pretty much all of them who are making great pizza and have time to chat.

OK, self: Thanks for sitting in the hot seat. But ... do you think this is really fair, giving yourself these softball questions? Maybe you should allow the Slice'rs to ask you questions in the comments.

Hmmm, questions from Slice'rs... That might be interesting. I just figured I should go through the same rigamarole I put other people through each week, so I asked myself the standard Qs. But, sure....

If anyone wants to add additional questions to this interview, feel free to ask them in the comments. I'll answer them as best I can. 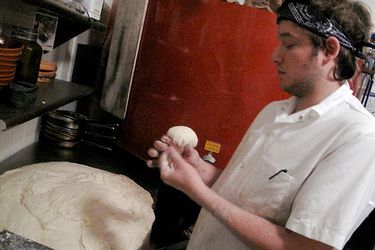 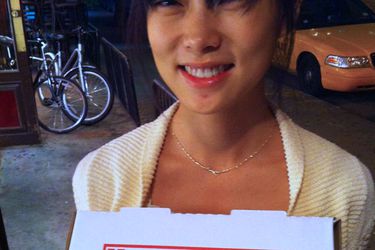 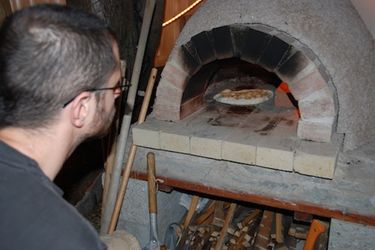