I've "known" Will Fain for years now—at least through email and the comments here on Slice. He's given me countless heads-ups to crazy and cool and tasty pizza intel from around the world and the web — as well as some great tips on Portland, Oregon, pizza before I made my recent trip there. He's this week's Pizza Obsessive. Get to know him! —The Mgmt.

What people seem to be calling New York–Neapolitan. I like my pizzas with fresh mozz, a minimally seasoned sauce, and a thin, crisp crust. I also like my slices LARGE.

The Pizza Cognition Theory, as stated by Sam Sifton, says that "the first slice of pizza a child sees and tastes ... becomes, for him, pizza." Do you remember your first slice? Where was it from, is the place still around, and if so, does it hold up? On that note, has your taste in pizza evolved over time?

I think the Pizza Cognition Theory is a buncha hooey. Though I don't remember it, my first slice was probably from Jerry's Subs & Pizza, which is a regional chain in the Mid-Atlantic region. Jerry's pizza in hindsight is craptastic, conveyor-belt baked schlock, but it still holds a special place in my heart. I can happily say that I've never tried their subs, as the lure of pizza was always too great. That said, my taste has definitely changed and I've turned into probably the worst kind of pizza obsessive—a pizza snob. I refuse to ingest cold pizza and will not pay for pizza from delivery chains. Jerry's just won't do it for me anymore, and I haven't had a slice from there in roughly a decade.

Pepperoni is right up there. Di Fara's pepperoni is hands-down the best I've ever had. Hot soppressata can also be a winner, but it's not the sentimental favorite. In the end though, I'm a fan of simplicity. I love a Margherita with extra basil. To you pizzaioli who skimp on the Genovese, fie, I say! Fie to your parsimonious ways!

Outside of my own kitchen, Pyro Pizza, Wy'east, Ken's Artisan, and Apizza Scholls are my top spots. Ken's, for my money, is the best of the lot and makes my all-time top 10 list. When they're on their game, their pies are tops on the West Coast.

Probably Di Fara. It may not be the best, but I love the whole routine—making the trip on the Q train, waiting for an hour and a half with friends, watching Dom DeMarco methodically do this thing (especially pulling pizzas out of the oven barehanded), being a part of the scrum of antsy and ever more ravenous customers.... Granted, I only go about once a year, but it's fun for me. Guaranteed quality time with friends. Guaranteed good pizza talk. Guaranteed good pizza.

I started making it at home three years ago when I found myself in a remote corner of the planet that was virtually devoid of passable pies. It was especially frustrating after having been spoiled for two years by the plethora of pizza options when I lived in Brooklyn.

The first pizza I ever made:

As for a recipe, some people are really über-scientific and exacting about this stuff—ratios, temperatures, etc. I tend to keep some basic numbers in mind but make adjustments as I go. A lot of it I do by feel.

I did a little tutorial with a friend a while ago who then went ahead a wrote down my process. [It appears below, after the interview ... —The Mgmt.]

They're all equally important for a quality pizza, but a good crust is what I appreciate the most. It's the hardest part to get right. Any shmoe can buy fancy canned tomatoes and cheese, but making a fresh dough and baking it well requires a certain amount of dedication.

A couple of years ago I would've railed about the injustices of excessive toppings and deep dish pizza, but I've become more understanding in my old age.

Otherwise, my biggest bone to pick with the pizza world right now is that good pizza is still really hard to find in a lot of the country and that pizza from delivery chains could be soooooo much better. It's hideous how bad their food is and yet how many people actually pay for it. But I imagine I'm preaching to the choir here.

It's maybe a cliché at this point, but my answer is pineapple. It's too sweet for my pizza palate, but it's also super fantastic on its own. Why ruin both the pizza and the pineapple? Leave it off the pie and save it for dessert.

It's kind of a toss-up. One was a muttonbird-topped pizza that my friend made for me when I was in New Zealand. Muttonbird is a seafaring avian, and is fatty and salty, kind of like an anchovy-duck hybrid. It was scrumptious.

The other one tasted like a more standard pizza, but it lacked some key ingredients, as it was gluten-free, vegan pizza—no wheat, no cheese. It was more of a Sicilian-style and it remains the only pan-baked pizza I've ever done. I used a variety of flours, including soy, chickpea, and brown rice. Xanthan gum was added as a kind of gluten replacement. And if I recall correctly, I dropped in some baking soda, just in case the yeast didn't help it rise enough. For flavor, garlic and herbs were thrown into the mix also. And salt. Mustn't forget salt. Then, if I remember correctly, it was topped with a fairly standard tomato-based sauce, mushrooms, and drizzled with melted nutritional yeast, which has a kind of creamy, salty, umami flavor.

Portland, Oregon, to Phoenix. For Pizzeria Bianco. I seem to be one of the few people disappointed in my visit there. It was good, but the crust was pretty flavorless that day. The Rosa, which seems to give people the howling fantods, I found to be too oily-rich. Though my reaction may have been a result of just trying to consume too much. Between two of us, we downed the roasted vegetable plate—which was outstanding and probably the highlight of the meal—a Margherita, a Wiseguy, and the Rosa.

Pizza and pork products seem to have been riding the same wave of culinary popularity. I only hope that wave gets bigger.

Also: If there are any quality PDX-based pizzerias who need help stretching dough and manning their oven, please feel free to hire me.

2. Dissolve yeast in warm, but not hot water (less than 1/2 amount of flour)

3. Add water to flour a little at a time, until dough becomes spongy

5. Cover the bowl and let the dough rest for 15 minutes

6. Take the dough out of the bowl and place on floured surface

7. Knead dough until it's not sticky anymore, form dough into a ball

9. Prepare Tupperware container by coating it with olive oil

10. Cut dough ball evenly and form into smaller balls (balls should be about as big as a palm)

11. Place dough balls in Tupperware and put in the fridge for a night or two... or five.

1. Check dough balls, they are ready when there are small, evenly spaced bubbles on the bottom

3. Place the pizza stone on top of that and turn oven on broil (heat it for at least 45 minutes)

8. Dip dough ball in flour and place on pizza peel

9. Press on dough from the middle to flatten it out, careful to get close to the edges, but don't flatten them out.

11. Put sauce on top, grate parmigiano on the sauce, and place basil on top of that

12. Place mozzarella cheese (smaller chunks of cheese if pizza is cooking faster, larger if it's cooking slower) and toppings 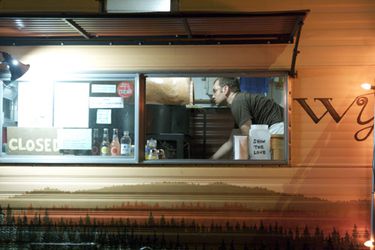 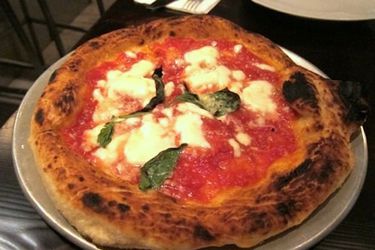