You know those actors who seem to spend their entire careers in supporting roles, yet manage to steal every scene they're in? John Goodman. Alan Rickman. You know the type. You always want more of them, but know you can't have it. Wouldn't it be great if you could flip the script on some of those movies? Maybe let Hans Gruber drop John McClane off the building for a change, let the Sheriff of Nottingham cut out Robin Hood's heart with a spoon, or find out exactly how Walter Sobchak could get a toe by 3 p.m.

I feel that way every time I get a really great al pastor taco. Sure, the crisp-edged marinated pork is the star, but an al pastor taco would be nothing without that sweet sliver of roasted pineapple. I always want more of it. I don't cast movies, but heck, I am the master of my own taco, and if I want to graduate the pineapple from supporting role to star and take that pork back down to bit player, I've got the power to do it.

I typically have a pretty good sense of how my dishes are going to taste before I finish making them, but this time I wasn't sure. Would the sweetness of the pineapple be overwhelming? Would the pork still come through? I decided to find out the only way I know how: by doing it.

Surprisingly, there aren't too many precedents for pineapple tacos. Only one I could find, in fact. According to Eater, it appears on the tasting menu at Alex Stupak's Empellón Cocina in New York, where he pairs achiote-rubbed roasted pineapple with lardo. (A similar recipe is also included in his book, Tacos: Recipes and Provocations.)

For my version, I started by peeling and splitting a whole pineapple into large chunks,* which I rubbed in an adobo-style marinade largely based on the one I developed for my carne asada recipe, though I simplified it a bit and removed the orange juice. (I figured the pineapple would have enough fruitiness on its own.) I knew from my long series of experiments with al pastor that slow-roasting the pineapple is the best way to intensify its flavor. Slow-roasting not only tenderizes the pineapple and concentrates its juices, it also promotes caramelization and the breakdown of natural sugars into sweeter and more complex by-products.

Learn how to cut a pineapple like a badass!

I considered a few different pork products to complement the flavor of the pineapple (even a movie star needs a supporting character or two) and settled on bacon. It's easy to find, already comes neatly packaged in thin slices, and has a smoky-sweet flavor that pairs perfectly with the pineapple.

Typical al pastor is made by topping a vertical skewer of sliced pork with a chunk of pineapple to allow the pineapple juices to drip over the meat as it slowly roasts. Reversing those roles means draping the pineapple chunks with bacon before setting them in the oven on a foil-lined rimmed baking sheet. About an hour later, this is what emerges:

Doesn't that just look lovely? The bacon fat renders and seeps underneath the pineapple as it roasts, so those edges that are in contact with the pan get an ultra-intense boost of flavor, fueled by caramelization and the Maillard reaction. Even without the crisp bacon, the pineapple neatly straddles that line between sweet and savory. I like to slice it into fat chunks and stuff them inside charred corn tortillas with a bit of that crispy bacon. Some of the reserved adobo marinade makes a fine salsa, though I couldn't resist adding a spoonful of my charred salsa verde to the mix. Crumbled cotija cheese, sliced red chilies, and cilantro round out the flavors.

In truth, even that small amount of bacon is almost superfluous, because the pineapple totally steals the show from the get-go. This is the perfect snack to serve at the game—or maybe when you finally get around to making and releasing that all-Snape-all-the-time recut of Harry Potter in honor of Rickman's passing. 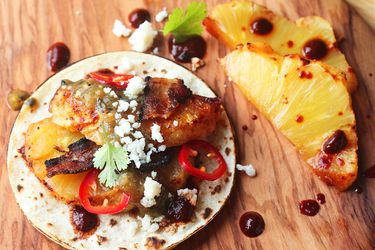 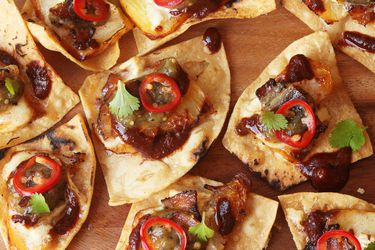 Best Eaten Alone Without Pants On: Pineapple and Bacon Nachos 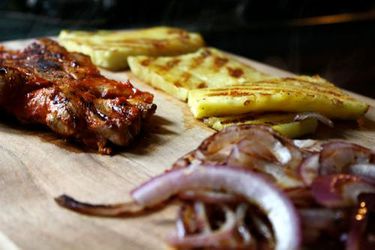 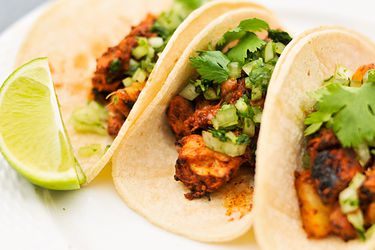