I'm not sure whether it's the taste that comes first when the memory hits me, or the sense of place. I do know that it usually happens when there's a threat of rain, and particularly when I'm walking. All of a sudden, for a moment, I'll feel as if I'm on a humid sidewalk in Hong Kong, and I'm about to eat the best bowl of pho in the world.

Taste memories can be maddeningly unspecific. Sometimes it is the taste itself that is muddied; other times, the taste is clear but its context is blurry. I've wondered for years about the location of a superlative meatloaf masquerading as a burger that I had in the summer of 2000, somewhere within an hour's drive of Amherst, Massachusetts. But my memory of that pho is impeccable in the moment it hits me.

There is a hint of clove, the musk of black cardamom, and the distinct whiff of star anise and cinnamon near the top of my mouth, toward the back of my throat; there is, of course, a little of that minerality so characteristic of raw beef, a bit of sweetness from rock sugar, a little swell of savor from fish sauce and MSG. Think of the scent of shaved onion and cilantro wilting in hot broth; think also of the dark, caramel notes of charred ginger and onion skins. Think of the best pho you've ever had, but imagine it better, much better. Then imagine that you've eaten that bowl for 25 years. Then, finally, imagine that you'll never eat it again.

I used to think of the memory as being a bit like déjà vu, since part of its effect depends on my realization, midway through an instant, that I have experienced it before. Yet I've come to compare it instead to seeing a ghost of a loved one, or some other crippling manifestation of grief: a brief presence, made all the more keenly felt, and more missed, by its sudden disappearance. There is an element of grievance, too, since I know by now that the taste cannot be replicated. In some ways, it feels as if I've been denied an inheritance.

It may seem odd for a Japanese-American expat to claim a Vietnamese bowl of beef noodle soup, served in Hong Kong, as his birthright, but I do. Our family lore is very clear about this pho's importance. My mother downed two bowls before going to the hospital where she gave birth to my brother, and repeated the process a couple years later when I came due. And even though we left Hong Kong when I was six months old, only returning to live there 17 years later, we'd make the pilgrimage back to the same restaurant every time we passed through the city. Sometimes my mother would insist on taking a cab there straight from Kai Tak Airport, with all our bags in tow. The restaurant staff would invariably recognize us—or, rather, they'd recognize my mother—and our order never changed: a bowl of beef pho each and a side order of cha gio, or spring rolls, to share.

The pho would come out first: a clear, thin broth, filled with submerged banh pho noodles, obscured by raw beef slices haphazardly arranged, like lotus leaves on a pond. Translucent arcs of shaved raw white onion and a few leaves of cilantro were the only garnish. Instead of the plate of bean sprouts and herbs commonly served at other Vietnamese restaurants, the bowl was accompanied by a small plate of chopped red chilies and a little lime wedge. The spring rolls would arrive a bit later, remarkable for both their craggy crusts and the similar restraint shown in their accompaniments—they were served with nothing more than a little green leaf lettuce, which you'd use to wrap the rolls up before dipping the whole thing in the nuoc cham.

I've been inside that restaurant so many times that its layout is indelibly imprinted on my memory: the squat wooden tables and their squat backless stools, lined up like pews, fanning out from a central throughway, down which the servers would rush to greet us as we entered; the bad oil-painting prints that lined the walls, all of them depicting Vietnamese rice farmers; the two-top in the back where the owners sat, smoking cigarettes and calculating the bills, which they'd write out by hand.

Of the many memories of my mother in that place, a few stand out. I remember being a child and running toy cars along the wooden table's edge as she explained to me how the hot broth cooked the raw beef. I remember, as an adolescent, making fun of her as she expertly wrapped a piece of spring roll in lettuce using her chopsticks, to avoid getting her fingers greasy. I also remember coming home from college to her joking about how the steroids she'd been taking for an autoimmune condition had led her to change up her usual order, tacking on fried chicken doused in a garlic-butter sauce.

One summer, home from college, I ate that pho every weekday for two and a half months. I was interning at a magazine, and I figured out that if I walked quickly and ate fast, I could ride the four subway stops there, eat two bowls, and get back in under an hour. After the first week, the servers and I figured out an efficient system. I'd sit down, and they'd come out with the first bowl of pho and one of those small plates of chili and lime. Just as I finished the first bowl, the second one would arrive, along with more chili and more lime. When I was done, I'd leave enough cash to cover the bill and tip and nod a good-bye before rushing out the door to return to work on time.

There are a couple of mystifying elements to my family's obsession with the place. For one, there was another Vietnamese restaurant next door, which we never entered—my parents claimed to have tried it before we were born and come away unimpressed. For another, we never really called it "pho" until much later; for close to two decades, we referred to it as "beef noodle soup." I also didn't eat another bowl of pho until I was 20 years old, when I worked for a summer in Cambodia, and I don't think my parents ever strayed from their beef noodle soup until that same year, when they stopped in Vietnam on their way to visit me.

In the years since, I've eaten bowls of pho from all over the place, and none of them can compare. I don't mean just the terrible ones I've had here in New York, where, for the most part, pho is a joke. I also mean the ones I've enjoyed, in places with significant Vietnamese immigrant communities, like Northern Virginia and San Jose, California. Even the best pho I had on a brief trip to Vietnam didn't come close.

In 2008, just before she died, my mother told me that the restaurant had moved. The owners had merged with the neighboring Vietnamese place, and, while the new place wasn't too far away from the original location, the pho recipe had been changed. "It's not as good," she said, warning me to temper my expectations for my next visit, whenever that would be. She had asked one of the owners, who happened to live in the same building as my parents, why they'd changed it, and he'd said that the other restaurant's recipe was more popular with their combined clientele. "But the spring rolls are the same," she said.

When I finally got a chance to taste the new restaurant's pho, I couldn't help but feel disappointed. The broth was more fragrant, but cloyingly so, with a heavy dose of cinnamon and anise; the taste was all perfume and very little beef, and it was also too sweet. The staff were completely unfamiliar to me, save for one of the original owners, who nodded hello, though it wasn't clear she recognized me. In place of squat wooden tables and squat wooden stools were tables of a standard size, with high-backed chairs, in the middle of the room, and booths with tables along the room's sides. It was entirely foreign.

I've tried to replicate that original pho many times at home—I tried for around six years before I gave up. No matter how I altered the ratios of bone and meat for the broth, it always came out too insipid or too strong, too thin or too viscous, and the flavor invariably came out too muddy. No matter how I fiddled with the spice mix, there was always something off. And every time I thought I'd gotten close, I'd eventually get hit by the taste memory while walking down a street just before a storm, and I'd be back on Cannon Street in Hong Kong, and realize I was still getting it wrong.

Nowadays, I make a pretty decent chicken pho regularly. I rarely attempt beef, and even when I do, I try to tamp down my expectations, in order to stave off my inevitable disappointment. All of which is to say that it is not a fond taste memory so much as a haunting. It holds no promise for better pho on the horizon; it is, like any memory of my mother, only a reminder of loss.

If you're curious, that Vietnamese restaurant is still open. It's called Green Cottage Yin Ping Vietnamese Restaurant, and it's in Wan Chai, on Jaffe Road. The name is a combination of the names of the two neighboring restaurants from the old days—Green Cottage was the one we never tried. It has generally positive reviews, so the food probably isn't half bad. At least, I know the spring rolls are good. 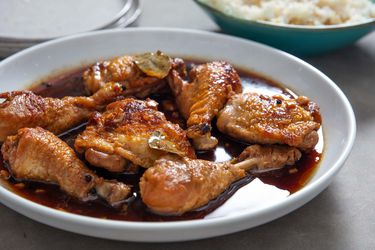 I Grew Up Abroad. Do I Have a Cuisine? 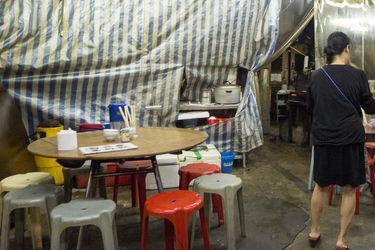