Today we're getting back to the basics, exploring a few of the simplest, yet most persistent points of contention amongst steak-fryers and grillers.

If you've been a longtime reader of the Food Lab, you've already got your head around a few of the basics, like why you should cut against the grain (it makes for more tender bites), or why you need to rest your steak after cooking it (keeps it nice and juicy). If you're really clever, you'll figure out how to apply some of the principles outlined in our Roasted and Reverse Seared Prime Rib recipe and tests on how often you should flip a burger to ensure that your steak is cooked perfectly evenly from edge to center (hint: warm it up first, flip it over and over as it cooks). Want the ultimate in even cooking and tenderness? Try cooking it in a beer cooler, using this sous-vide steak primer for temperature guidelines.

But, if being married has taught me anything, no matter how much of an expert you are in a given subject, there's always more to learn. Take memorizing dates, for example. Apparently just anniversaries aren't good enough—I've also got to find room in my head for birthdays. Luckily, hers falls two days before Dumpling's (which is today!). This makes it both an easy date to remember, and a very hard date to remember on time. D'oh! Happy belated birthday, dear.

Anyhow, today, we move on to discuss a few more of my favorite steak-related things: salting, poking, and searing, in that order.

When to Salt Steak

Read a half dozen cookbooks or listen to a half dozen celebrity chefs, and you're likely to hear at least as many different responses as to when you should salt your meat. Some claim salting immediately before putting it in the pan is best. Others opt not to salt the meat at all, instead salting the pan and placing the meat directly on top. Still, others insist on salting and resting for up to a few days in advance. Who's right?

To test this, I bought myself a half dozen thick-cut bone-in ribeyes (I love the smile butchers get in their eyes when you do this) and salted them at 10-minute intervals before searing them in a hot skillet. So the last steak went into a pan immediately after salting, while the first steak went in a full 50 minutes after salting. All of the steaks were allowed to rest at room temperature for the full 50 minutes, ensuring that they were all at the same starting temperature before the cooking began.

Not only that, but I found that even after the liquid has been reabsorbed, it doesn't stop there. As the meat continues to rest past 40 minutes, the salt and brine will slowly work their way deeper and deeper into the muscle structure, giving you built-in seasoning beyond just the outer surface you'd get from cooking right after salting or salting the skillet.

Indeed, the absolute best steak I had was one that I had salted on both sides then allowed to rest on a rack overnight in the refrigerator uncovered. It appears to dry out slightly, but it's only superficial—the amount of drying that occurs from an overnight rest (about 5% moisture loss) is negligible compared to the amount of moisture driven off during cooking anyway (upwards of 20%, even more in the hard-seared edges). As the salt makes its way back into the meat, you'll probably also notice that it becomes a deeper color. That's because the dissolved proteins scatter slightly differently than they did when they were still whole.

Moral of the story: If you've got the time, salt your meat for at least 40 minutes and up to overnight before cooking. If you haven't got 40 minutes, it's better to season immediately before cooking. Cooking the steak anywhere between three and 40 minutes after salting is the worst way to do it.

Searing for the Perfect Crust

There's not all that much new ground to cover here—we all know that searing absolutely positively does not "seal in juice," right? It serves as a means of adding color and flavor and enhancing texture. That's all. We also know that the absolute best way to sear is to flip your meat frequently as it cooks so that it cooks evenly from both sides, cooks faster, and develops less of the gray, overcooked zone that you get from a traditional one-side-then-the-other-side sear, right?*

*See the links at the top if you don't believe me.

But what's the best medium to sear in? Butter, or oil? Some claim that a mixture of both is best, often using the excuse that butter alone has too low a smoke point—it begins to burn and turn black at temperature too low to properly sear meat in. Somehow, cutting the butter with a bit of oil is supposed to raise this smoke point. Unfortunately, that's not true. It's because when we say that "butter is burnt," we're not really talking about the butter as a whole—we're talking specifically about the milk proteins in butter. The little white specks you see when you melt it. It's these milk proteins that burn when you get them too hot, and believe me—they couldn't care less whether they're being cooked in butterfat or in oil. Either way, they burn.

What all this means is that the best cooking medium for a steak is actually plain old oil. At least to start. Adding butter to the pan just a minute or two before you finish cooking is not a bad idea. This is just enough time to allow the buttery flavor and texture (butter is creamier tasting than oil because it has a higher percentage of saturated fat) to coat the meat, but not so long that it will burn excessively, producing acrid undertones.

So for searing, let me explain. No, there is too much. Let me sum up: Get oil smoking hot in a heavy pan. Add salted and peppered steak and cook, flipping every 15 to 30 seconds until the desired internal temperature is almost reached. Add butter to the pan and continue to cook until the steak is done. Remove from pan.

Follow that summary, and what you've got is a steak that's nearly perfect. What's missing, you ask?

Well, assuming you like your steaks as thick as I do, there's a significant edge that sees little to no direct action during the entire searing process, and that edge is often the fattiest, most delicious part of the steak. It deserves love just as much as the next guy.

Here's what you do:

Watch a Johnsonville Brat commercial, and you'll be told that poking with a fork is one of the cardinal sins of sausage cookery, and they're right. A sausage has an impermeable casing for a reason: to keep all of those rendered fats and juices right in there with the meat. Pierce it, create a hole, and you'll see a fountain of golden juices spring forth. A steak, on the other hand, has no such casing to protect it, so is it ok to poke or not?

I cooked two steaks of known weight side by side. The first, I carefully turned with tongs each time. The second, I used a fourchette de cuisine (that's fancy-pants for one of those two-pronged forks), completely indiscriminately, mercilessly (though not excessively) poking the steak this way and that as I flipped it. Afterward, I weighed both steaks again. The result? Exactly the same weight loss.

The thing is, with steaks, moisture loss is due to one thing: muscle fibers tightening due to the application of heat and squeezing out their liquid. Unless you actually manage to completely pierce or slash these muscle fibers, the moisture they lose is directly proportional to the temperature to which you cook your steak. A fork is simply not sharp enough to harm muscle fibers in any significant way. Yes, you'll see a minuscule amount of juices seeping their way out of the fork holes, but it's a really negligible amount. Indeed, that's why the many-bladed tenderizing tool known as a Jaccard is able to tenderize your meat without causing it to lose any excess moisture—it separates muscle fibers, but doesn't actually cut them or open them up.

What about that most-shunned of techniques, the old cut-and-peek? Surely, actually slashing a cooking steak open with a knife and looking inside is going to have a detrimental effect on it, right?

Well, yes and no. Yes, a knife actually severs muscle fibers, allowing them to leak their contents to the outside world. But the amount of moisture loss is really very minimal. Cut-and-peek too many times, and you run the risk of shredding your steak. In reality though, one or two peeks won't really be detectable in the end product.

But there's a bigger problem with the cut-and-peek method: It's not accurate. Because of the fact that juices get squeezed out quickly from hot meat, when you cut into the center of a still-hot steak (like one that's sitting in the pan), it'll appear to be much rarer than it really is. If you continue to cook your steak until it appears right by the cut-and-peek method, it'll be overcooked by the time you actually eat it. And thick steaks continue to rise in temperature even after being removed from the pan.

What does that mean? It means that if you haven't yet, you should go out and get yourself a good, accurate digital thermometer, duh!

Now that is a steak worth fretting over!

This recipe has been edited to clarify the searing and resting steps.

An equivalent weight of porterhouse, T-bone, tenderloin, or strip steak can be used in place of ribeye steak. Try to get steaks at least one and a half inches thick. It's better to cook a bigger steak and portion it after cooking than to try to cook thinner steaks. 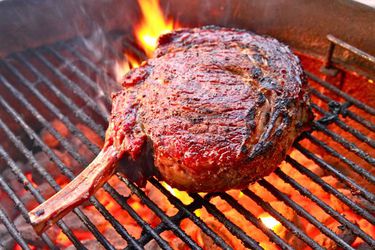 How To Grill a Gigantic Rib-Eye Steak