Popular Brooklyn pizzeria Paulie Gee's will open a branch in Baltimore in 2013, Slice has learned. Paul Giannone, whose transformation from IT manager to renowned pizza-maker is well-documented on this site (among many other places), is partnering with Baltimore local "Pizzablogger" (who asked to remain anonymous), at what will be called Paulie Gee's Hampden. (You may know Pizzablogger from his posts and comments on Slice, from his presence on Pizzamaking.com, or from his summertime pop-up, Pizza Ruby, at the Baltimore Farmers Market.)

"I want to grow Paulie Gee's, but I don't want it to affect what I'm doing here in Greenpoint," Giannone said. "The best way I can expand and still do that is to help someone else."

Pizzablogger has signed a lease on the former Hampden Republican Club in Batltimore's hip Hampden neighborhood.

The pair had originally talked about opening in Philadelphia, but Pizzablogger, a loyal Baltimorean, didn't want to uproot his family from the city he loves. The partnership initially seemed over at that point, but, said Pizzablogger, "Paulie charged me with finding a neighborhood worth taking a look at in Baltimore. I already knew what neighborhood I envisioned opening my own pizzeria in—Hampden—so I just needed to have Paulie come down and show it to him."

"Paulie came down mid-January with [his wife] Mary Ann and we spent all day looking at various neighborhoods, starting with Hampden. After a grand tour, we came back to Hampden again, and Paulie could see it was the right neighborhood. From there it was just a matter of looking at various spaces, finding the right one, and eventually being able to sign a lease on the building, which I did just prior to Thanksgiving."

The large space is packed with old-school Baltimore charm, and Giannone and Pizzablogger plan to retain much of the social club's original character and decor, including a painting of dogs playing poker and possibly the organization's trophies and banners—if Giannone is able to acquire them from their respective owners. Local contractors will be brought in to do whatever modifications the owners wish to make.

The space is large enough, Giannone said, that they're thinking of using two wood-fired ovens (the same Stefano Ferrara model as used in Greenpoint). Those ovens will figure prominently in the restaurant's design. "We're going to drop them right in the middle of the place," Giannone said. "The large, round tables are gonna have to go."

This is in keeping with Giannone's appreciation of pizza-making as theater, as is the case at Paulie Gee's Greenpoint. "If Ferrara can do it, I want to get the oven 'tattooed' the same as at Greenpoint," he said, referring to the "Napoli" and sunburst tile design, which harks back to his original DIY backyard oven.

If the partners do decide on a dual-oven set-up—a strong likelihood given the capacity of the place—Pizzablogger said he hopes to eventually serve his square pies from one of them. But, he said, "My only focus at the moment is being able to actually run two wood-fired ovens on busy nights. That alone is a big task out of the gate, and I don't want to introduce another variable too soon. But it has always been a vision of mine to bake my square in a wood-fired oven. I've always pushed the baking time with my squares to be as short as possible while still being adequately cooked. So I will definitely be experimenting with the square pies and hopefully dial it in enough to be comfortable serving it. That's kind of a signature pie of mine and I will only make it via natural leavening or not at all. Can't wait to dome a square!"

And that's not the only way the menu may differ.

"I want to create half the menu that's been successful here, our greatest hits: The Greepointer, the Cherry Jones, etc," Giannone said. "The other part of the menu will be [Pizzablogger's] to create, to spread his wings. He also envisions doing "pie swaps," in which successful pies from the Hampden location will appear on the Greenpoint menu.

And what kind of pies might we see from Pizzablogger's part of the menu?

"I am not nearly as creative as someone like Paulie, the crew at Roberta's, TXCraig, etc. when it comes to topping combinations or with pie names," Pizzablogger said. "But I will have a few of my own offerings, with the Hampdenite being a definite one in the summer months. It's simple, but people at the Baltimore Farmer's Market loved it: basically a Margherita with aleppo chiles, calabrian chile oil, and heirloom cherry tomatoes. Definitely a pie with lemons on it, which I always make and love. I often finish my lemon pies with Mike's Hot Honey and sometimes pull the pie with about a minute to go and add crushed pine nuts before putting back into the oven to finish. Wintergreen, Baltimore Flats and a few more may pop-up from time to time, including the Crab Chip. No crabs, but it does use an ingredient Paulie dislikes. All of the regular offerings will use baker's yeast like the Greenpoint location. I may ocassionally offer one round pizza that uses natural leavening as a limited quantity offering on certain nights."

The large space has a separate bar area in the back, isolated from the dining room. "It's like something out of Goodfellas," Giannone says. Expect a well-considered selection of beers there, as Pizzablogger is a beer aficionado and will be in charge of the beverage menu as well.

"It's hard when you first start out to be in a position to demand difficult-to-obtain or limited-quantity beers from various distributors and importers," Pizzablogger says. "But it's my desire to stock hard-to-obtain beers and have the bar be attractive to beer enthusiasts—and I am willing to go out of my way to do that."

Giannone and Pizzablogger hope to open between April and June of 2013. Stay tuned, folks. We'll have more Paulie Gee's Hampden news as it develops. 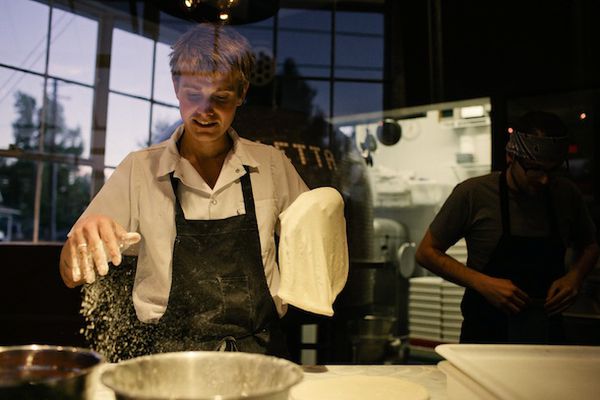 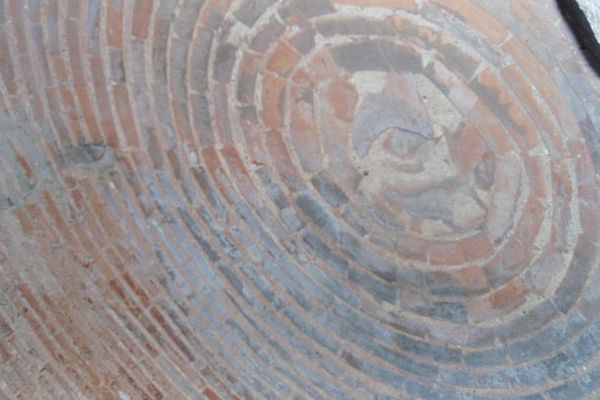