This minimalist version of the classic starts with dried beans for a creamy finish.

There's arguably a different version of pasta e fagioli, the classic Italian bean and pasta soup, for every region, province, and household of Italy, and every Italian (and some non-Italian) household outside of Italy, too. There are brothy ones, tomatoey ones, creamy ones, abundant ones chock-full of vegetables, austere ones with little more than pasta and beans, garlicky ones, winey ones, spicy ones, meaty ones, cheesy ones, vegan ones, and on and on. That kind of variation can be maddening, but it also makes the dish an excellent case study.

His solution was to make a brothy, flavor-packed pasta e fagioli to compensate for what the beans lacked. He added tomatoes, plenty of garlic and onion, red pepper flakes, chicken stock, bay leaves, oregano, and parsley, and even used three different fats (pancetta, olive oil, and butter). It's exactly what you should do when cooking with canned beans, because they can't carry the show by themselves.

I point it out because today I want to contrast it with another recipe, based on the Tuscan approach to the dish, that is pretty much on the opposite end of the pasta e fagioli spectrum. This one has only two main ingredients: beans and pasta. Its success lives or dies by the quality of those beans. Canned beans, therefore, should not be used in this soup—only dried beans will do here. Get nice beans that haven't been sitting on a shelf for years and cook them properly, and you'll unlock the beauty of what a bean can be. Use really old beans and cook them poorly, and the soup will suffer.

As for the type of bean, many types can work. Here I'm using the speckled cranberry beans (also known as borlotti or romano beans), but white beans like cannellini or navy would work wonderfully, as would chickpeas (though we also have a really nice pasta e ceci recipe for you).

With the beans cooked, the rest of the soup couldn't be simpler: purée half of the beans with some bean-cooking liquid to make a smooth, creamy soup base, then add the remaining whole beans for texture.

If I make a large batch or have leftovers, I refrigerate the pasta and soup separately, combining only as much as I need for the portions I'm reheating. To keep the pasta from sticking to itself, just toss it with a tiny bit of olive oil.

Between this recipe and Kenji's, you pretty much have the two ends of the pasta-e-fagioli spectrum. They're both great recipes, but the best part may well be all the infinite possibilities that exist between them. Make one, then the other, then feel free to play with ideas from both. Maybe you'll stumble upon your own family recipe to pass down through the generations.

This recipe was re-tested in 2022 and lightly edited for even better results.

Instead of being soaked overnight, beans can also be prepared using the quick-soak method. Cover with water in a large pot, bring to a boil, remove from heat, and let rest for 1 hour. Drain and proceed with the recipe as directed. 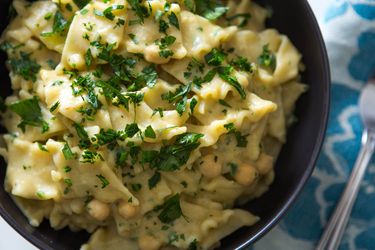 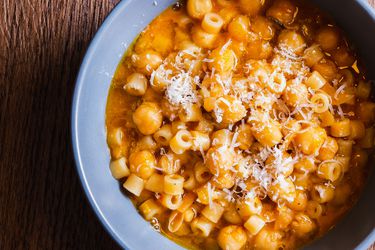