The sea, the sun, and the interplay of salty, sweet, and sour. This is the tongue-twisting list of things that come to mind when I think of Sicily and its cuisine. And all of these qualities are at play in a dish I was recently introduced to called pasta c'anciuova e muddica atturrata, which hails from Palermo.

This no-frills title translates from dialect to "pasta with anchovies and toasted breadcrumbs."* The name might turn off anchovy skeptics who prefer to have the presence of delicious salty fish hidden behind names of back-stabbed Roman emperors (or maybe they've unknowingly made a wildly popular, more "approachable" version of this Sicilian pasta already, and refer to it by its viral internet title that cleverly plays up the allium elements of the dish rather than the 'chovies). These people are missing out.

*Palermo dialect to be precise, where "anciuova" gets a "u"; the best I can describe the way it's pronounced is ahnch-woah-vah, whereas in other parts of the region it is just "anciova," so it sounds more like ahn-cho-vah.

This is an incredibly simple dish to make, with a huge savory-salty-sweet flavor payoff. It starts with onion and garlic gently cooked in olive oil until they just begin to soften. Anchovy fillets are added to the pan and allowed to dissolve before a large spoonful of Sicilian tomato estratto is folded into the mix. While similar in appearance, estratto, or "astruttu" in dialect, is exponentially more concentrated and intensely flavored than the regular "double-concentrated" tomato paste used in vodka sauce. It's made with ripe tomatoes, that are lightly cooked and "passed" or milled (as with passata). The tomato purée is seasoned lightly with salt, spread out on wooden boards, and sun-dried over the course of several days until almost all of the water has evaporated and the mixture has reduced to a thick paste. As with sun-dried seaweed or the shellfish in XO sauce, this process concentrates glutamate levels to produce a deeply savory product.

Combined with the punch of anchovies, the estratto makes for a [redacted] bomb if there ever was one. At this point, what you have in the pan is more of a paste than a sauce. So, the mixture is loosened with the simplest of things: Hot water from the pasta pot, which is barely seasoned with salt to compensate for the saltiness of the anchovies. A quick stir, and you have a full-bodied sugo.

Bucatini are cooked shy of al dente (I am a fan of cooking pasta to "al chiodo," or "to the nail," in the water) before transferring to finish cooking and marry with the sauce. Once the noodles are well-coated and cooked to your liking, golden raisins and pine nuts (a classic Sicilian combination that shows the North African influence on the island's cuisine) get tossed in, along with a handful of the "muddica atturrata," or toasted breadcrumbs. The raisins provide pops of sweetness that complement the onion and balance the salinity of the estratto and anchovies, the pine nuts lend a hint of nutty bitterness, and the breadcrumbs tighten the sauce, helping it cling to the pasta even better. Once plated, the pasta is topped with another sprinkling of breadcrumbs for a crunchy finish.

This dish has it all—intense savory and salty notes from the anchovies and estratto, acidity from the tomatoes, sweetness from the onions and raisins, bitterness from the pinoli, and crunch from the muddica atturrata. Not bad for what is essentially a pantry pasta. By that token, I've written this recipe to work with both the traditional (but pricey in the States) Sicilian tomato estratto, and the more affordable (and widely available) concentrated tomato paste. Both versions are delicious, but I highly recommend purchasing the estratto if it's within your means. Because the recipe calls for such small quantities, the pine nuts and raisins are also listed as optional, but are highly recommended; the dish will still taste very good without, but they really make this pasta shine.

Muddica atturrata (toasted breadcrumbs) are traditionally made with pangrattato—breadcrumbs made by processing stale bread. This recipe is written to make extra toasted breadcrumbs from fresh or stale bread (we used sourdough bâtard during recipe testing, but most types of white bread will work fine) because if you are taking the time to make your own breadcrumbs, you might as well make a big batch so you have some ready to go in your pantry for future use. If you don't want to make your own breadcrumbs, you can substitute 1/2 cup (35g) panko breadcrumbs, and toast them with oil as written in the recipe.

Sicilian tomato estratto is made by sun-drying milled tomatoes on wooden tables or terra cotta trays for about 1 week to produce a super-concentrated paste that is sometimes homogenized with a small amount of extra-virgin olive oil. While similar in appearance to tomato paste, estratto has a much more intense savory flavor, and a drier texture. It is a key component to this dish and worth seeking out (purchase it online here), but it is an expensive specialty product. As a result, I have provided instructions for making this recipe with more affordable tomato paste. Tomato paste is much sweeter and has a more forward, bright, fresh tomato flavor. For this reason, if using tomato paste, the amount of anchovies should be increased to 12 fillets, and the golden raisins should be left out. The dish won't have quite the same savory punch when made with regular tomato paste, but it will still be very tasty.

Raisins and pine nuts are important ingredients in Sicilian cuisine; they provide pops of sweetness/nuttiness and textural contrast in dishes like pasta con le sarde and caponata, as well as this pasta. That said, if you don't have them on hand, you can certainly do without them in this recipe without worrying about ruining the dish. No need to make a special run to the grocery store for 1 tablespoon of each. 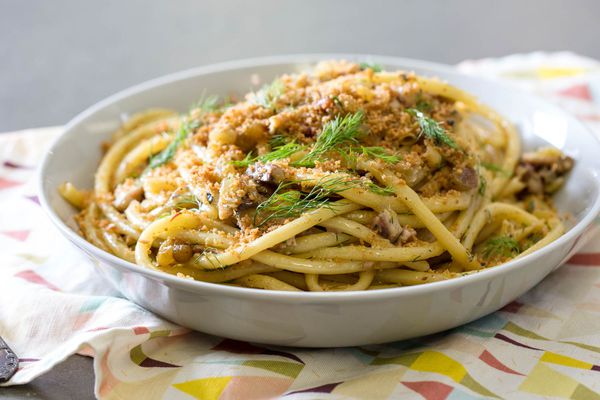 How to Make Sicilian Pasta With Sardines, or Pasta Con le Sarde 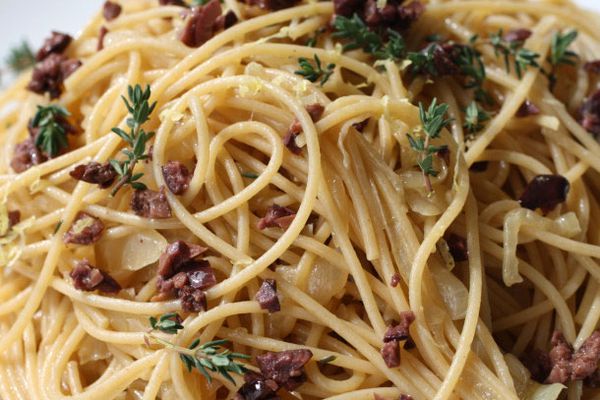