This Neapolitan beef ragù is all about the onions.

Braised beef and onions, but make it ragù. That's "la Genovese," a classic Neapolitan sugo, in a nutshell. (It's not Ligurian, despite its name.) Carrots, celery, a ton of onions, and a "seconda scelta" (literally, "second choice") cut of beef, which we would call a "tough" cut, slowly cooked down with white wine to form a meaty gravy, perfect for dressing al dente ziti from nearby Gragnano, the dried pasta capital of Italy. Compared to its famous, chock-full-of-meats Campanian cousin, ragù Napoletano, la Genovese is remarkable for its simplicity.

Like ragù Napoletano and many other Central and Southern Italian meat sauces, la Genovese was historically a two-for-one recipe that allowed cooks to stretch a braise over multiple courses and meals. The concept is simple: Slowly braise tough cuts of meat with aromatics until tender, then use the braising liquid as a sauce for dressing pasta (or polenta in certain areas), while serving the meat as its own course.

Italian-American "Sunday gravy" is born out of this cucina povera tradition, and stands in stark contrast to ragùs from historically more affluent regions in the northern third of Italy, such as ragù alla Bolognese, into which a mixture of ground meats are thoroughly incorporated along with expensive dairy ingredients like butter, Parmigiano-Reggiano, and milk or cream. Over time, as meat became less of a luxury in the south, more and more of the braised beef in la Genovese made its way back into the pasta-dressing sauce, and these days it's served as a meat sauce.

The Right Cut of Beef for Genovese

So which cut of beef should you go with for Genovese? As with any braise or stew, full-flavored, collagen-rich cuts that can be trimmed and cut into manageable yet sizable pieces are what you're after. Shanks are a traditional choice, but in the US they can be expensive and hard to find.

Chuck, a hard-working group of muscles from a cow's shoulder area, is a good choice: it has great flavor, it's relatively cheap, and it's widely available. For braises, we always recommend buying a large piece of meat, rather than chunks of "stew meat," and portioning it into small steaks for slow-cooking.

Most beef braises from Western European culinary traditions call for an initial searing step before braising, but this isn't necessary for Genovese. In side-by-side tests, I actually preferred the ragù I made with beef that wasn't browned before braising; it tasted more like a cohesive sauce rather than a stew cosplaying as pasta companion. So after I generously season the pieces of chuck, I nestle them in a layer of onions in a Dutch oven then cover them with more onions before I pop the lid on top.

A lot of recipes for braised meat ragùs call for shredding the meat after it's cooked, but that can throw off the texture and balance of a sauce. Again, Genovese is a dressing for pasta, not a barbacoa or birria-style braise, so once the pieces of chuck are tender, I prefer to cut them into smaller, bite-size pieces, and add them back to the braising liquid as it reduces, uncovered, until it reaches its final saucy consistency. Small shreds of beef will meld into the sauce as the pot is stirred and agitated when the pasta is added to the mix, but most of the pieces of beef will remain intact, and the result is the best-of-both-worlds texture of a good braised ragù.

Onions: The Real Star of the Show

While meat will inevitably get top billing in any ragù, the real star of la Genovese is the humble onion, which is used in a way that displays the ingenuity of cucina povera. Anyone who has gone on a bone broth bender knows that meat stocks, the braising medium of choice for the French, aren't cheap to make. Genovese gets around this problem by using the natural moisture content of an eye-opening amount of onions in place of meat broth to braise the beef.

With a two to one ratio by weight of onions to beef cooking in the pot, the onions release natural moisture as they begin to break down, which is trapped under the lid of a Dutch oven to produce an onion broth of sorts. Over time, the onions become jammy and sweet, while the beef's collagen gradually turns to gelatin.

Of course, it wouldn't be an Italian recipe without a spirited debate over which variety of onion is best for Genovese. The sweet (but not Vidalia sweet) "cipolla ramata di Montoro," grown in an area south of Naples between Avellino and Salerno, is generally considered to be the allium of choice for this sauce. But unless you have a Campanian onion connection, your best bet is to use standard yellow or red onions for this recipe. Both work well, just avoid using harsher white onions.

Genovese is generally categorized as a non-tomato ragù, much like Bolognese. But, again like Bolognese, that doesn't mean it's completely tomato-free. It's common for cooks to work a small amount of tomato paste, or a handful of cherry tomatoes, into the sauce, and I found that both were welcome additions.

Without any tomato product whatsoever, the sauce is flat, and almost cloyingly sweet from the onions. Just a spoonful of tomato paste gives the sauce savory backbone, while cherry tomatoes work with the white wine in the sauce to balance the onion sweetness with fresh acidity. This isn't a "red sauce" ragù, but a touch of tomato really helps the other components shine.

To cheese or not to cheese? Adding a sprinkling of grated Parmigiano-Reggiano or salty Pecorino Romano will not get you in trouble with the Genovese purists, but it's also not a requirement. For slow-cooked sugos, cheese isn't going to make or break the dish, but I recommend using a light hand, to allow the deep flavor of the braise to take center stage.

Strutto (lard) is the traditional fat used for making Genovese ragù, but extra-virgin olive oil works fine for this recipe as well. Lard lends the ragù extra meaty richness, while olive oil will give the sauce more grassy and peppery notes. Rendered lard is sold at some butcher shops as well as at Latin American markets. You can also render lard yourself from fatback or leaf lard (fat from the area around the kidneys), following the same technique used for rendering duck fat.

While this ragù is all about the onions and beef, adding a handful of fresh cherry tomatoes is accepted common practice, and provides a pop of freshness and bright acidity to balance the slow-cooked sweetness of the onions and carrots in the sauce.

Ziti and paccheri are traditional shapes from Gragnano, the dried pasta capital of Italy just outside Naples, and they're commonly paired with Genovese. The amount of sauce produced by this recipe is sufficient to dress up to 500 grams (1.1 pounds) of dried pasta, which is the weight of bags of pasta sold in Italy (50 grams more than the 1-pound bags and boxes used for the American market). So whether you've purchased a 1-pound or 500-gram bag of pasta, use the whole thing.

Genovese ragù can be made in advance, following recipe through Step 6, and refrigerated in an airtight container for up to 5 days or frozen for up to 3 months. Reheat gently over medium-low heat on stovetop, adding 1 to 2 tablespoons (15 to 30ml) of water as needed to loosen sauce. 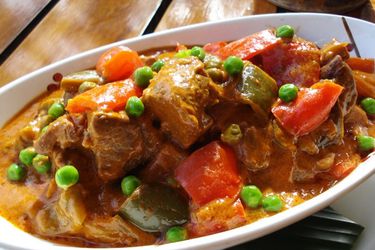