Labeling a dish "pantry-friendly" has become a selling point of late, even though it's a pretty vague term that often doesn't account for much of the cultural or culinary diversity that influences what fills our kitchen cupboards. The shelves of a well-stocked Jamaican pantry will look much different from those in a Korean household. But philosophically, the premise of a pantry-friendly recipe is universal: a simple, ideally quick-cooking dish, primarily composed of non-perishable ingredients. In Italy, where I grew up, pasta al tonno fits that criteria to a T.

Pasta al tonno is pretty self-explanatory—it's pasta, with tuna—and a large part of its appeal is its adaptability. Unlike iconic pastas such as carbonara, there's no prescriptive yet heavily debated ingredient list that you'll get in trouble for deviating from when making this dish. You can find it "in bianco" (no tomato); with canned or fresh tomatoes; with olives; with capers; with anchovy; with chiles; with garlic or onion (but usually not both); with parsley or basil. Canned tuna and dried pasta are the only nonnegotiables.

No matter what, pasta al tonno has to be "facile e veloce" (easy and fast) to prepare. The version that I grew up with in Rome features spaghetti tossed with a quick garlic-infused tomato sauce. It gets a touch of heat from dried peperoncino, and is finished with flaked olive oil–packed tuna and a handful of chopped parsley.

It's a simple and delicious balancing act between the brightness of tomatoes and the savory depth of canned tuna. Think of it as a less briny and divisive cousin to puttanesca. If you were to add porcini mushrooms to the mix you'd have a bowl of Roman-style spaghetti alla carrettiera. It's easy to see all the exciting possibilities for riffs and variations.

Unlike puttanesca or carrettiera, though, this pasta al tonno doesn't involve the punchy and intense flavors of capers, olives, and dried mushrooms that can hold their own against the bite of minced garlic. Here, whole garlic cloves are lightly crushed, browned in olive oil to more gently infuse it with their allium aroma, and then removed and discarded before building the tomato sauce. This is a classic Italian maneuver for getting some, but not too much, garlic flavor into a dish, when aglio e olio aren't the stars of the show.

With the garlic out, a little dried chile goes in, followed by hand-crushed whole peeled tomatoes (this sauce is meant to have some texture to it, not passata smoothness). The sauce simmers for the few minutes it takes to boil pasta (spaghetti or, even better, spaghettoni, are my shape of choice for this dish) a minute shy of al dente. Right before making the pasta to sauce transfer, large flakes of tuna are stirred into the sauce along with an optional dash of fish sauce for a small umami boost. Folding the tuna into the sauce at the end ensures that it doesn't get overworked into a gummy paste, keeping the pieces of fish intact.

The pasta and a ladleful of cooking water are added to the mix to finish cooking, marrying the noodles and sauce. This is a quick finish, with the sauce acting as more of a dressing to the pasta rather than the gravity blanket embrace of gricia, 'nduja sugo, or starchy beans and greens. A showering of chopped parsley brings some much-needed freshness to the party, and that's all there is to it—another pantry pasta to add to your repertoire.

Olive-oil packed tuna is sold in cans and jars of varying sizes. Two of our favorite widely available brands, Tonnino and Ortiz, sell tuna in 6.7- and 7.76-ounce (190 and 220g) jars, respectively, that yield a drained weight of approximately 5.3 ounces (150g) each. Two jars of tuna will yield the correct amount for this recipe, or you can use two to three 5-ounce (140g) cans (using a little less or a little more tuna than called for in the recipe won't make or break the dish).

This recipe will work with both "regular" and ventresca tuna. Ventresca, which comes from the fatty belly of the fish, is moister and more flavorful than other canned tuna, but also significantly more expensive.

This pasta is at its best when enjoyed immediately, but it keeps well for next-day leftovers as well. It can be refrigerated in an airtight container for up to 2 days. For this pasta, leftovers are actually best enjoyed cold. 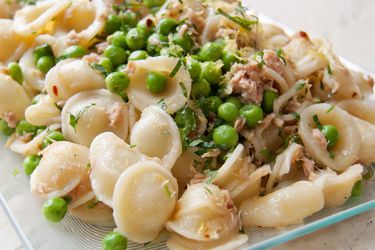