That whole expression about making lemonade with the lemons life gives you has always baffled me a bit. Why wouldn't you make a vinaigrette? Or perhaps chop them into wedges to spritz onto that crispy pan-seared halibut life also dropped on you? Or squirt some into your pan sauces to brighten them up just before serving? There are a whole lot of things I'd rather make with my life's lemons than lemonade.

But when life gives you massive amounts of excess chicken Parm, or when life, perhaps, gives you a half dozen friends who want to eat chicken Parm without the need for pesky utensils, then there's only one thing to do: Make chicken Parm sandwiches.

How you go about doing that is a matter up for debate. After a week of testing chicken Parmesan recipes before arriving at my final iteration, I had plenty of chicken to experiment with. I've got some opinions on the matter.

First off, the best chicken Parm sandwiches start with the best leftover chicken Parm. The recipe I posted last week, with its buttermilk brine to ensure juicy and flavorful results and unique crusting step is a good place to start. (Not to mention the All-Day Red Sauce that tops it.)

The classic way to form a chicken Parm sandwich is to stuff a single breaded and fried chicken cutlet into a Philly-style hoagie roll and smother it with tomato sauce and melted mozzarella cheese. Lightly crisp with a crumb that tends to be softer and lighter than typical Old World breads, the hoagie roll is a great vehicle for trapping steam and sauce, turning everything soft and tender inside.

My chicken, however, has got an extra-crisp crust and I kind of wanted to accentuate that. A sturdier, crustier loaf is what I was after. I settled on a full-sized loaf of ciabatta, which I split down the middle. The ciabatta must be toasted before you start layering in the ingredients, otherwise it stays too tough and chewy, squishing the chicken and sauce out of the sandwich with each bite.

I drizzle it with olive oil and toast it under the broiler.

Afterwards, I paint it with a layer of extra sauce to start the soaking process, then shingle on my cooked chicken cutlets along with the sauce they were cooked under. Finally, a small layer of grated mozzarella finishes it off before it goes under the broiler for another stay, just until the cheese is browned and bubbly.

You can try to eat the sandwich yourself (and if you succeed, I'll send you an autographed plaque), but it's a party-sized sandwich meant for groups, so slice that sucker open and marvel at how juicy and tender the chicken stayed even after an overnight in the fridge. (But not too long or the other kids are gonna beat you to seconds.) 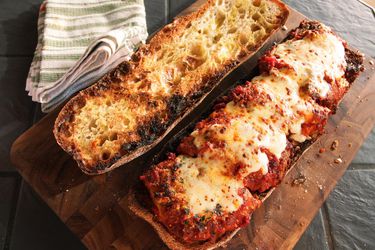 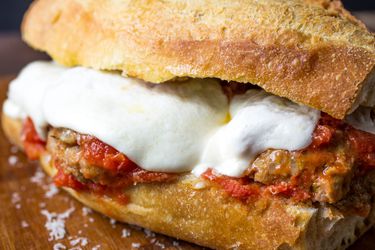