Soy sauce, the standard salty/savory additive in Japanese cuisine, is now a near-ubiquitous sight in kitchens around the world. If you've looked for a soy sauce alternative that offers a different twist, you may have already have discovered ponzu sauce, often described as a citrus variation on soy.

Ponzu sauce is actually a little more complicated than that. The origin of ponzu is a mystery, but the name has a little Dutch in it. "Pon" comes from the Dutch for "punch," one of a number of surviving Dutch loan words that entered the Japanese language in the 17th century when the Dutch East India Company were the only Westerners invited to trade with isolationist Japan.

The other half of the name, "su," means "vinegar," which reveals one of the sauce's major components. Taken as a whole, "punch" plus "vinegar" suggests a sauce with a mix of acid and fruity flavors. Good start, but that's still only half the story.

Despite having a Dutch influence on its name, the components of ponzu are distinctly Japanese. It's traditionally made with rice vinegar, mirin, katsuobushi, and konbu. If you're not fully familiar with Japanese food terms, those last three ingredients are rice wine, bonito fish flakes, and seaweed—all familiar standbys in a Japanese kitchen. The presence of bonito and seaweed provides a similar umami flavor profile to dashi, the fish stock that's the basis of many Japanese broths. Some recipes use sake rather than mirin because it's a stronger, more tart rice wine, but mirin offers a more delicate flavor.

To make ponzu, these four ingredients are simmered together before the final star ingredient is added: citrus. Ponzu is traditionally made with juice from a bitter orange, a yuzu (a small sour fruit that resembles a grapefruit), or a sudachi (a very round type of mandarin that's often as green as a lime).

You might notice one ingredient missing from that list: soy sauce. Confusingly, the word "ponzu" is now used to describe both the light citrus dressing without soy, and the much darker seasoning sauce made with soy. It should perhaps be reserved for the former, with "ponzu soy" used to describe the latter. Judging from the bottles available in supermarkets, that fight has already been lost. If you have a bottle of ponzu in your pantry, it contains soy sauce, probably because the version without soy is too delicate to be shelf-stable.

The ponzu in your pantry is almost certainly made with either lemon or lime juice rather than one of the hard-to-find (and far more expensive) Japanese citrus fruits like sudachi. That's a shame, because these fruits often have a remarkable complexity of tart and bitter flavors. Yuzu in particular is slowly making its presence known in North America as a fashionable ingredient for some chefs and bartenders. It may be better off that way, of course, rather than being drowned out in bottles of commercial-grade ponzu.

Like so many pantry stables, ponzu without soy sauce is easy to make if you can source the ingredients, and much more delicious when made fresh, but having a bottle on hand for ease of everyday use is well worth it, especially as an alternative to soy sauce.

Ponzu is traditionally used as a dip for shabu-shabu and other simmered dishes, thin slices of seared meat (tataki), as part of a dip for soba or somen noodles, sashimi, or occasionally dumplings. It's also great for tempura—another European loan word, though this time from the Portuguese, who are actually credited with introducing Japan to the idea of deep-frying food in batter!

Because of the acid of the citrus juice, ponzu also makes a terrific marinade, especially for a fresh, lively ceviche. Ponzu is not used to cook with, but a few dashes at the end of cooking—for example in a soup or a stew or a stir fry—can add a delicious kick. Add some sesame oil and you have an instant Japanese vinaigrette.

Because ponzu has such a wonderful mix of salt, tart, and savory flavors, it can be used to enhance all kinds of dishes—not just Japanese! Check out a few of the recipes below. It'll fast become a dependable favorite in the kitchen. 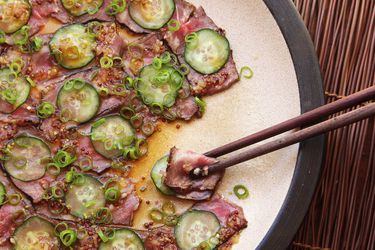 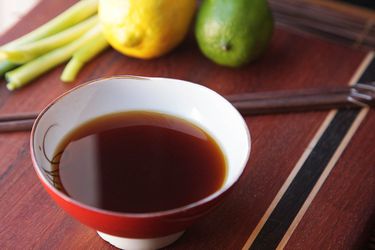