Among the many bottles and jars that lurk in your fridge or cupboard, you may find a jar of store-bought salsa, the familiar spicy red sauce that isn't always spicy, isn't always red, and isn't even always used as sauce.

If you do have a jar, it's most likely a coarse blend of tomatoes, jalapeños and onions with the consistency of vegetable soup. The label may recommend using it as a condiment or a dip, but the Spanish name "salsa" is its own serving suggestion. Salsa means sauce—and not in a ketchupy dollop-on-the-side way.

The first salsa, the proto-salsa, pre-dates the arrival of Spanish colonists to the Americas. A Franciscan missionary in the early 16th century reported seeing a market stall that sold a ground-up mixture of tomatoes, chile peppers, and seeds. This mixture was served poured over meat. It was a sauce, not a condiment.

"In a chunky, fresh modern-day salsa, the colors of onions, tomatoes, and jalapeño chiles are said to represent the white, red, and green of the Mexican flag, but there was no Mexico back then, and no onions, either."

There were no onions in this original recipe. In a chunky, fresh modern-day salsa, the colors of onions, tomatoes, and jalapeño chiles are said to represent the white, red, and green of the Mexican flag, but there was no Mexico back then, and no onions, either. Onions came to the Americas with the colonists. Some other ingredients we strongly associate with salsa also arrived on boats from the Old World. Neither lime nor cilantro existed in the Americas six centuries ago.

Tomatoes and chile peppers are native to the Americas, and were cultivated for thousands of years by the Incans before spreading to the Mayans and the Aztecs. In fact, chile peppers are arguably the only consistent ingredient in salsa. Though supermarkets sell "mild" varieties that are light on the chiles, the point of salsa is spice; that's why the word is also used to describe a spicy style of music and a spicy style of dance! If you can't stand the heat, stay off the dance floor.

Store-bought salsas generally use just one variety of pepper: jalapeño. Extra hot salsas might be made with chile extract, rather than a hotter variety of whole pepper, presumably to regulate the heat. If you're looking for salsa made with a pepper that's naturally spicier than jalapeño, you want to look for serrano peppers. If you're more adventurous still, you could go with habanero. Anything hotter than that and you should make sure you know what you're getting into! Test before you pour. If you see a salsa labeled "chipotle," it's made with smoked jalapeño peppers, so the flavor is notably smoky and not overly spicy.

Tomatoes, chiles, onion, garlic, and cilantro are the basic ingredients of both salsa roja (which prosaically translates as "red sauce") and pico de gallo (which more evocatively means "beak of the rooster"). The difference between the two is that salsa roja uses cooked tomatoes and is blended, and pico de gallo uses raw tomatoes and is chopped. The name "pico de gallo" supposedly refers to the way the chunks can be picked up between finger and thumb.

The third well-known style of salsa is salsa verde, or "green sauce." Salsa verde uses tomatillos instead of tomatoes. Tomatillos are a tart, sour relative of the tomato that also featured in the earliest known variations of salsa. Naturally green, they look like unripe tomatoes wrapped in their own little paper lantern husks.

"Tomatillos were the first of many ingredients to steal the salsa spotlight from tomatoes. Despite once being the star of the sauce, tomatoes are now the ingredient most easily left out."

Tomatillos were the first of many ingredients to steal the salsa spotlight from tomatoes. Despite once being the star of the sauce, tomatoes are now the ingredient most easily left out. You may find recipes for salsa where tomatoes are replaced by corn, avocado, or bell pepper, or by upstart fruits like pineapple, mango, peach, or melon. In larger supermarkets you can also find jarred versions of many of these salsas.

You may think there's no reason to buy salsa in jars, since it's incredibly easy to make. All you really need to do is chop or blend the ingredients. But those fresh flavors fade fast, so keeping a jar of the supermarket variety around is definitely a convenient fall-back. If you are using salsa from a jar, remember that it's not just a dip for your chips or a condiment to plop on a burger. You can slather it over grilled steaks, chicken breasts, pork chops, tuna, or even an omelet. You can also mix it into ground beef, use it as a pasta sauce, or add a spoonful to a soup or a stew. Stir in some extra lime juice and it makes a great overnight marinade. You don't need to be dainty with it.

Just don't be afraid of the kick. Salsa is meant to be spicy. 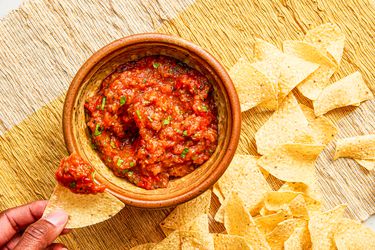