Every New Year's Day in Japan, families sit down to eat a bowl of ozoni, a soup studded with tender, chewy mochi and lots of other tasty bites.

Luck and longevity—these are just two of the qualities associated with mochi, the soft and chewy Japanese rice cakes made from short-grain, glutinous rice. Each member of the mochi family is rich with symbolism. Sakura (cherry blossom) mochi—stuffed with red bean paste and wrapped in a salted Japanese cherry leaf—has become a symbol of spring, while hishi mochi—a three-layered diamond in pink, white, and green—celebrates Japan’s “Girls' Day” by representing fertility (the diamond shape) and health (the three colors are each made from a healthy ingredient).

One of the most significant vehicles for mochi, though, is on New Year’s Day, in a soup called ozoni, which translates roughly to “miscellaneous simmered.” As the name implies, there's flexibility in how one prepares it. Each region and family has its own style of ozoni, with differing ingredients and flavor profiles—but the one thing they all have in common are those little puffy rice pillows bobbing in the broth.

According to Marc Matsumoto of the cooking website No Recipes, ozoni was originally served at the start of ritualized meals called honzen-ryōri, which were popular among the samurai. Because ozoni was the first course, it’s thought to have transitioned to the first meal served in the new year after it became more widely eaten in Japan roughly 500 years ago.

Today, the primary components of ozoni can be split into four distinct groups: the dashi base, the broth's seasoning, the mochi, and then any additional ingredients.

While there are many possible seasonings for ozoni, the biggest divide is between Kyoto's Kansai-style, known for its creamy white broth flavored with its famous saikyo miso, and Tokyo's Kanto-style, which pulls in salty umami from soy sauce, resulting in a beautiful, amber-toned soup.

Ozoni is a dish firmly rooted in the Japanese psyche, so it’s no surprise the topic can evoke a visceral reaction. When I asked Maiko Kyogoku, owner of Bessou, a Japanese homestyle restaurant in New York, about the mochi component, she lit up, describing her love for how it was toasted and crunchy in the version she grew up eating. “It was always the most exciting part!” she tells me. “You toast the mochi until it bubbles up, so it’s crunchy outside, but inside it's still gooey rice cake.”

The mochi Kyogoku is referring to are kiri mochi: Rectangular in shape, their surface often scored so each piece can be broken into four smaller blocks; they've become especially popular in metropolitan areas like Tokyo as they are faster and easier to produce via a sheeting process, as opposed to traditional hand-shaping.

Historically, however, all mochi were round—contemporary Kansai-style mochi still are. (Round, disc-like mochi shaped by hand evoke the Japanese phrase en man 円満, which translates roughly as “living in harmony and peace.” Because the character for "en" was also the traditional character for the word "circle," round mochi came to symbolize those virtues.) “You need to eat it quickly,” Kyoguku tells me, “or else the mochi binds to each other. My sibling and I would fight over it since there’s only one to three per big bowl!”

Beyond the broth and mochi, the uniqueness of each bowl of ozoni lies in its additional ingredients. Common ones include carrots, daikon, and kamaboko (pink fish cake), which add the lucky New Year’s colors of white (for purity) and red (pink is considered a shade of red, and red is thought to ward off evil). Leafy greens like watercress or spinach, combined with chicken, meanwhile, are meant to represent advancement in life (the traditional term for “chicken and greens” sounds similar to one that means "honor and recognition").

Beyond these mainstays, ozoni often features regional specialties, like niboshi or dried anchovies in Shikoku island, or oysters in Hiroshima, nori in Chiba, or salmon and ikura (salmon roe) in Niigata. Each gives the soup a sense of terroir.

For Kyogoku, the process of preparing ozoni carries a gravity beyond the celebratory nature of the dish. “New Year’s was when my mom and dad could take time away from [their] restaurant...and be collaborative in our home kitchen,” she says. “The week before [January 1] they were always together. Our family’s ozoni was Mom’s, but my Dad has been making it [in her style] ever since she passed.”

Kyogoku shared her family recipe with me, which I used as a foundation for the one published here; written by her father, it felt like a gift to usher in the new year. Among the ideas I borrowed from the Kyogokus' recipe was using chicken stock as a base for the dashi broth and adding dried shiitake mushrooms to it along with kombu and bonito flakes (using shiitakes for the dashi is typical in the Miyagi prefecture, where Kyogoku's father is from). While putting together the final recipe, I also pulled in some elements (and measurements) of Matsumoto’s personal recipe, which, as he describes, lands “somewhere between my father’s Kanto-style ozoni and my mother’s Miyazaki-style one.”

The result is a liquid representation of umami’s many faces: shiitake, chicken, bonito flake, kombu, and sake (which contains far more of the amino acids that we taste as umami than most other types of alcohol), coupled with textures from crunchy to sticky and almost everything in-between. It’s restrained and delicate, balanced in a way that remains attentive to each of its components. There is a sense of coziness that’s hard to explain by any one thing; rather, it’s the sense that each piece is in its place, rife with its own meaning, adding an undeniable specialness to the tradition it’s building. Excitedly eating my own bowls of ozoni while developing this recipe, I could see how this became such a well-loved centerpiece of each new year.

Chicken stock isn't traditional in ozoni, but it was an aspect of Maiko Kyogoku's family recipe we found added a lot of depth. Feel free to use water instead. If you do use chicken stock, you can use any you happen to have on hand, though we particularly like making a very simple and clean version of it for this soup with just the chicken parts, onions, and garlic while omitting carrot, celery, and herbs. Kiri mochi are sold as hard, dried blocks wrapped in plastic packaging; they are often scored along one surface, making it possible to split each block into four pieces.

The broth base (all the way through seasoning with soy sauce) can be made up to three days in advance; keep refrigerated and return to a simmer before cooking chicken and fish cake. The blanched vegetables can all be blanched up to one day in advance and kept refrigerated until ready to use. 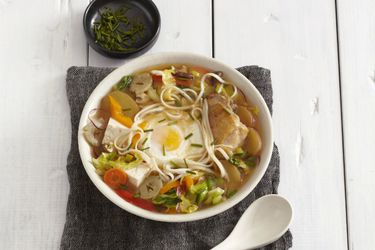 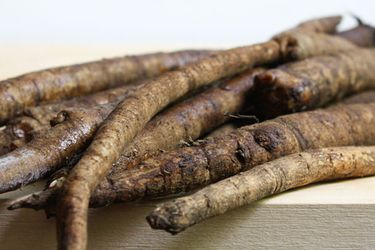 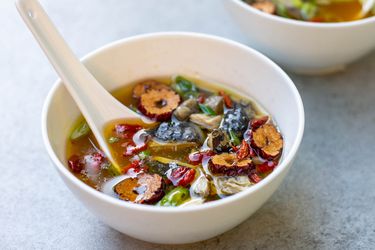 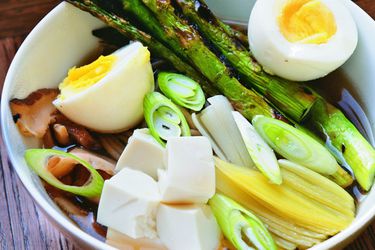