Reimagining a New Orleans classic through the flavors of Mexican rajas con crema.

After discovering that non-Antoine's oysters Rockefeller recipes are more often than not a bad cover of a hit song, I decided that I wanted to come up with a riff of my own that paid truly delicious homage to the original. Reading through poor imitation recipes that paired bivalves with wilted baby spinach, cream, and cheese didn't really work up my appetite, but the combination of deep green vegetables and dairy reminded me of a dish that does: Mexican rajas con crema.

Rajas are the dream vegetarian taco filling—strips of roasted poblano peppers simmered with onions, crema, and melty cheese. (Hey, if you want wilted baby spinach on your broiled oysters, there are plenty of recipes out there to keep you happy.) Before we get into it, let's be clear that there is nothing "authentic" about this recipe. If my version of oysters Rockefeller by rule can't be the genuine article, then this play on it certainly is not a how-to guide for making real-deal rajas. But it is tasty.

My ode to rajas begins by roasting a couple poblano peppers along with some whole scallions. Rather than tending to and turning them over an open flame, I opt for roasting the vegetables under the broiler, seeing as I'll be using it later for the oysters. I stem the poblanos, cut them in half lengthwise, and discard the seeds. Then I place the peppers skin-side up on a foil-lined baking sheet that's been lightly sprayed with vegetable cooking oil, along with some scallions. After lightly coating the poblanos' skins as well as the scallions with vegetable oil, I pop the sheet tray in the oven until the vegetables are nicely charred.

Charred scallions aren't usually used for making rajas, but they are a popular accompaniment at taquerias. The last time I visited Mexico City I invariably ended up ordering a side of cebollitas along with my tacos. Seeing as scallions played a role in the Rockefeller recipe, it seemed right to fit them in here, as well.

When they're done, I transfer the scallions to a cutting board, pile the poblano pieces in the center of the piece of foil, and gather the foil to form a pouch around the peppers. This gives the poblanos a chance to steam in the foil for a few minutes to release their flesh from the skins, making it easier to peel away and discard.

After that, I chop the peppers and scallions up.

The next steps follow the same basic procedure used for the more classic Rockefeller topping: Sweat down sliced shallots and garlic in butter (I use less butter here as I'll add in crema later) before adding the chopped poblanos and scallions, and cook this mixture until the moisture from the vegetables has evaporated. I then add a tablespoon of smoky mezcal in place of the absinthe. Again, feel free to leave out the booze if you prefer. To finish, stir in a half cup of crema (crème fraîche or sour cream will work, too), a pinch of ground coriander, and lime zest.

Buzz up the mixture in a food processor, then add roughly chopped cilantro and panko breadcrumbs and process the mixture to a paste. As with oysters Rockefeller, grab your properly stored and cleaned oysters, shuck them, and pipe the topping over them. Broil them in the same way, and then serve them up with lime wedges and some mezcal for sipping.

Might it be better than the original? You be the judge.

If you don't have rock salt, don't fret. A scrunched-up piece of aluminum foil can also hold the oysters in place on the baking sheet during the broiling step. For serving, mix a couple lightly beaten egg whites with kosher salt to form a wet paste that you can perch the finished oysters on.

Topping can be refrigerated overnight. Always keep plastic pressed directly against the surface of the topping when storing it to avoid forming a skin. Let topping sit at room temperature for 30 minutes before using it. 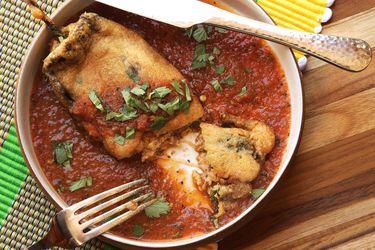 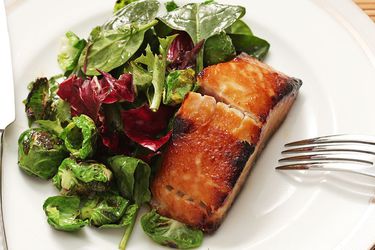