Thanksgiving isn't exactly about the small things in life; it's about the big, corny stuff—family, friendship, gratitude, community...and food. Blissfully disgusting amounts of food. And, as with most bad decisions, I've always believed that if you're gonna overeat to the point of extreme physical discomfort, you might as well commit. There's no joy to be had in half-assing this, folks.

So, with full-assing our primary objective, I've put together a very special menu for you. One that couldn't care less about sticks of butter and counting calories; a menu for the intrepid cook who isn't afraid to tackle deep-frying, braising, waffling, and sous vide–ing in one single meal. And I shall call it a menu of champions.

Now go forth, my champions, and flourish!

If, like me, you're not huge on dry, stringy turkey breast, this is the recipe for you. And yes, it's pretty much as ridiculously, mind-blowing-ly, eye-rolling-ly delicious as it sounds. If you're intimidated by the task of turning a hunk of turkey into that sexy-looking cylinder, don't worry—we've got a step-by-step slideshow for that.

The real thing to keep in mind is just how crazy-moist and juicy that garlic- and sage-rubbed sous vide meat's gonna be, with its crispy, greasy deep-fried exterior. Don't have a precision cooker? You can get pretty darn close with our oven-based version.

Get the recipe for Deep-Fried Sous Vide Turkey Porchetta (Turchetta) »

Just because you've made a totally stunning turchetta doesn't mean those legs shouldn't shine, too. They also shouldn't be quite as involved as the whole butterflying-rolling-tying-sous-videing-frying bit you're taking on. Which is why braising—virtually the most idiot-proof cooking method out there—is the name of this game.

Following a quick sear, the legs are joined by onion, carrot, celery, garlic, thyme, and rosemary. Together, they simmer in wine and stock until the meat is fall-apart tender. Then, while the legs rest, the braising liquid is quickly reduced (with a healthy dose of butter) to make a rich, flavorful gravy. Believe me, nobody will be wondering where the whole roast bird is when you come out of the kitchen bearing these babies.

Get the recipe for Red Wine-Braised Turkey Legs »

Stuffing is my favorite. I get all bouncing-up-and-down excited about it every year. (I get equally excited about the days of leftovers that ideally follow but rarely do...because I've eaten it all.) My favorite part? Those crisp edge bits that surround the fluffy, eggy, bready, sausage-studded interior. So get this: When you waffle stuffing, every piece is the corner piece. It's brilliant, and also sad, because it means that any chance I ever had at leftovers is permanently and forever lost.

Get the recipe for Stuffing Waffles »

Now that you're serving turkey porchetta, braised turkey legs, and stuffing waffles, regular old cranberry sauce simply will. Not. Do. Enter this spiced variation, which takes its inspiration from mulled wine. Seasoned with cinnamon, ginger, nutmeg, and allspice, it gets sweetness and nuance from a touch of molasses and maple syrup. It's pretty special, and how often do you get to say that about cranberry sauce?

Get the recipe for Spiced Red Wine Cranberry Sauce »

Steamed Brussels sprouts? Pshh. Roasted? Yeah, okay, fine. Deep-fried sprouts? Now we're talking. These guys fry up with sliced shallots until they're all crisp and shatter-y on the outside and tender on the inside. Then it's just a quick toss in sweet honey, tangy balsamic vinegar, and grassy parsley, and they're ready to serve.

Okay, let's be real: Most things are good with cheese. But not everything is this good. Tiny, tender new potatoes and sweet pearl onions, roasted with crisp chunks of slab bacon and a melty layer of Comté cheese, all covered with a crunchy garlic-bread crumb crust? Yeah, so long, roast potatoes.

Get the recipe for Cheesy Onion, Bacon, and New Potato Gratin »

Sure, the canned-soup version has served you perfectly adequately through years of successful Thanksgiving dinners. But we're full-assing champions this year, right? Our ultimate green bean casserole uses fresh-blanched green beans, plus a mushroom sauce made from honest-to-god mushrooms and—the best part—homemade crispy fried shallots instead of French's onions. If you don't want to go all the way here, just starting with fresh green beans makes a world of difference.

Get the recipe for The Ultimate Homemade Green Bean Casserole »

This pecan pie is nice and heavy on the pecans. Actually, it's nice and heavy on a lot of things: buttery, flaky crust; rich caramel custard; dense dark chocolate; and a sprinkle of sea salt to rein it all in. I don't know about you, but I won't be going back to traditional pecan pie for a long, long time (like, ever).

Get the recipe for Salted Chocolate Pecan Pie » 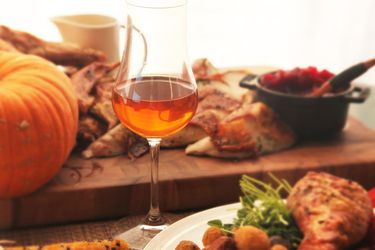 All the Recipes You Need for a Killer Thanksgiving Dinner 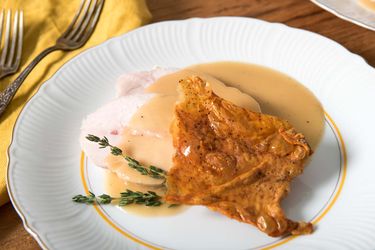